The tough times continued for the major European airfreight carriers in August as they recorded declines in demand and load factors.
The latest monthly statistics from European airlines revealed that Lufthansa, IAG Cargo, Air France KLM and Finnair all recorded demand declines during August.
Load factors were also down at Lufthansa, AF KLM and Finnair, while IAG does not provide this data.
It was no surprise that Finnair and AF KLM recorded the largest declines in demand as they are in the process of adjusting their offering; reducing freighter capacity in favour of bellyhold space. 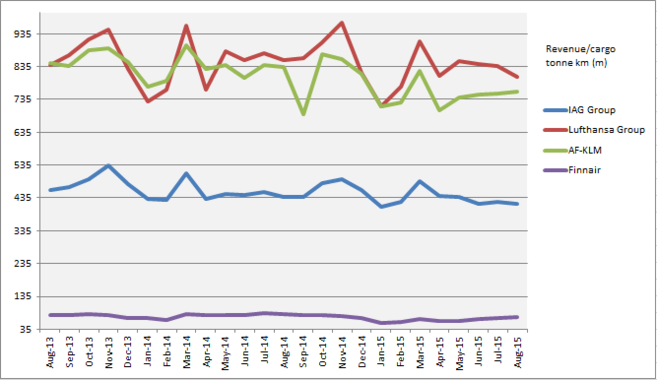 Source: companies
Finnair saw August traffic decline by 10.5% year-on-year to 71.5m revenue tonne km (RTK), while AF KLM recorded a slide of 8.9% on a year earlier to 759m RTK.
Finnair year-on-year comparisons were affected by its withdrawal from the use of leased NGA freighter aircraft capacity in Asian traffic. In August, its cargo traffic consisted almost entirely of belly cargo on scheduled flights.
Overall, its August capacity was down by 7.7% on last year to 123m available tonne km. 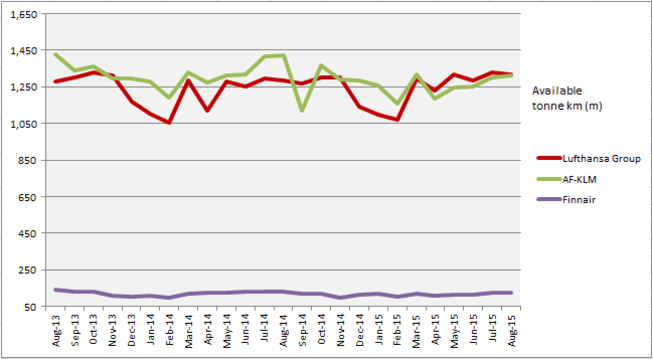 Source: companies
As a result of demand declining ahead of supply, its load factor slipped to 57.9% from 59.7% last year.
Meanwhile, AF KLM’s full-freighter capacity was down 31% compared with a year ago and overall space was 7.6% behind last year at 1.3bn ATK.
Its load factor slipped to 57.9% compared with 58.7% a year earlier.
Europe’s largest air cargo carrier, the Lufthansa Group also had a tough time during the mid-summer month even though it has not been making any structural fleet adjustments.
The German group was in fact the only one to have increased capacity during the month, recording a 2.6% increase to 1.3bn available cargo tonne km.
The increase in capacity follows the pattern for prior months of 2015; it has added capacity on last year in every month but January.
Meanwhile, it was not able to sell the additional space and August demand declined by 5.7% year on year to 805m revenue cargo tonne km.
The capacity additions and demand increases resulted in load factors sliding by 5.2 percentage points on last year 61.1%.
Its strategy of sticking with its current freighter fleet, despite capacity additions on the passenger side of the business and a weak cargo market in Europe meant that it recorded the largest percentage point slide in load factor.
This is the lowest load factor level it has recorded in at least the last five years.
Despite the decline, the German group still managed to record the highest load factor of all three of the airlines which provide this information. 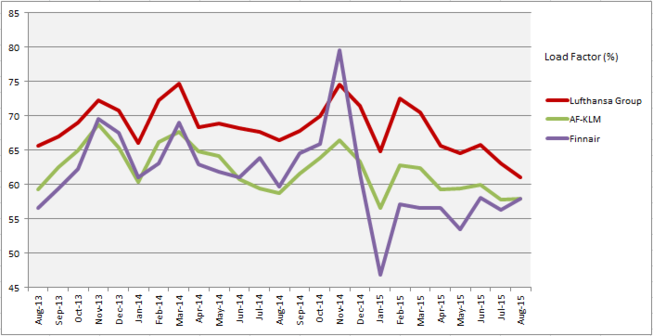 Source: companies
Finally, IAG Cargo, made up of British Airways and Iberia, saw demand slide by 4.8% on a year earlier to 417m cargo tonne km.
The figures reflect a difficult period for the European air cargo carriers as demand remains down on last year’s levels.
The trend looks set to continue in September as a result of China’s economic troubles, while Lufthansa faced two days of industrial action.
In its latest cargo industry review, Tony Tyler, IATA director general and chief executive, said: “The recent stock-market turmoil shows that investors have real fears about the strength of the global economy. And the disappointing July freight performance is symptomatic of a broader slowdown in economic growth.
"The combination of China’s continued shift towards domestic markets, wider weakness in emerging markets, and slowing global trade indicates that it will continue to be a rough ride for air cargo in the months to come."