Major European airlines had another tough month in September as IAG Cargo, Lufthansa and Finnair all recorded cargo volume declines, although Air France KLM did see a strike-related increase.
The busiest of the four carrier groups, Lufthansa, continues to have a tough year as volumes continue track behind last year’s levels.
In September, it carried 816m revenue cargo tonne km (RCTK), a 5.2% decline on the same month a year earlier.
The airline that reported the largest percentage demand decline during the month was Finnair, which saw volumes decline by 15.1% on a year earlier to 66.4m RTK. 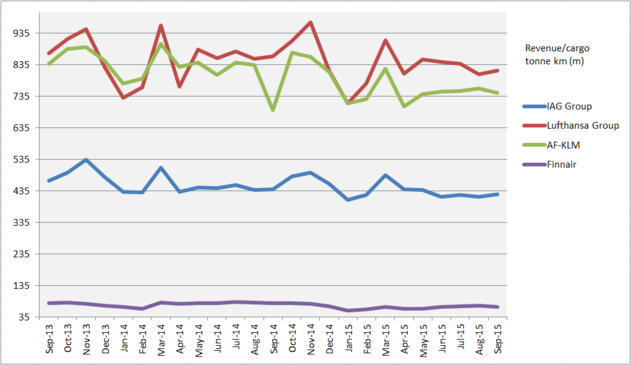 Data Source: Airlines. Graphic Source: Air Cargo News
This is largely down to the fact Finnair has had year-on-year comparisons affected by its withdrawal from the use of leased NGA freighter aircraft capacity in Asian traffic.
There was also a nationwide strike in mid-September, although the airline said it didn’t expect cargo operations to be affected.
IAG, meanwhile, saw its figures decline by 3.4% in September against a year earlier to 424m CTK. Its volumes have also been tracking below the levels recorded since 2011 for all but one month of the year.
In contrast, Air France KLM recorded its first year-on-year increase in September as volumes jumped by 8.1% on a year earlier to 746m RTK.
However, the Franco-Dutch airline group said this was the result of a strike last year. It is also adjusting its offering; reducing freighter capacity in favour of bellyhold space.
The strike related industrial action also affected capacity comparisons, with an increase in September’s available tonne km of 11.3% year on year. 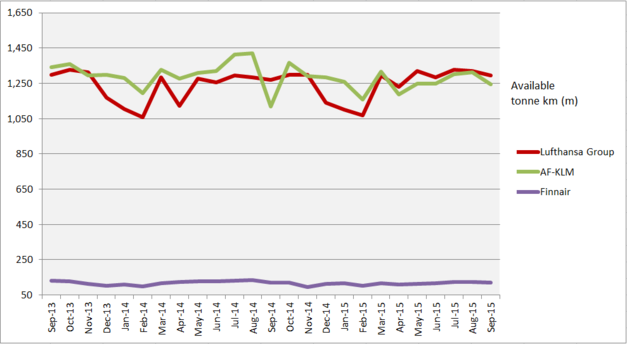 Data Source: Airlines. Graphic Source: Air Cargo News
As a result of capacity increasing ahead of demand, its load factor slipped to 59.9% this September compared with 61.6% last year.
Load factor was also down at Lufthansa where levels slid to 63% from 67.8% a year ago. The volume decline experienced by the German airline group was compounded by a 2% increase in capacity to 1,296 ATK.
Finnair’s load factor was also down a year earlier. It recorded a 8.7 percentage point decline to 55.9% as its volume decrease was higher than its capacity decrease of 1.9% to 118.9m ATK. 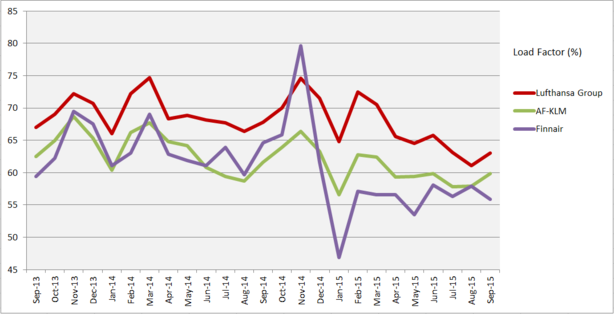