IAG and Finnair saw cargo volumes return to growth in April, while Air France KLM and Lufthansa suffered from the effects of strike action.
The IAG Group, which includes British Airways, Iberia and Aer Lingus, saw cargo demand increase by 3% year on year in April to 480m cargo ton kms.
The was the airline’s first increase of the year and indications are that cargo demand in the region has begun to pick up again after Chinese New Year, the strength of 2017 performance and tough winter conditions had an impact on comparisons in March.
Airports have also been reporting improved demand growth in April, while forwarder reports have also been positive with Kuehne+Nagel stating that despite a “higher euro as a burden, Europe rebounded in April, with Sweden, Italy, the Netherlands and Germany at the top”.
Over the first four months, IAG’s strong performance in April also pushes the carrier group into positive territory, with cargo traffic up by 0.2% on the same period in 2017.
Click on chart for interactive version 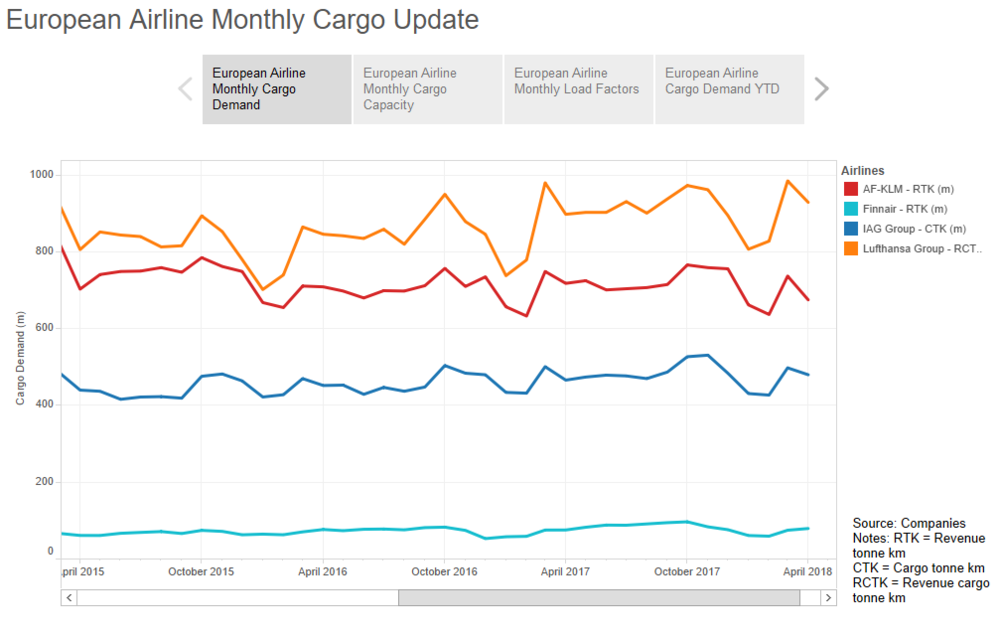 It was a similarly positive story at Finnair where cargo demand for April increased by 5.1% – its largest increase of the year so far – to 79.5 revenue tonne kms.
However, the introduction of A350s on Asian routes since April last year meant that supply outstripped demand and its cargo load factor slipped to 62.4% compared with 67.4% in 2017.
Over the first four months of the year, demand is up by 2.6% after a decline in March.
At Air France KLM strike action continued to take its toll on performance as it registered a 6% decline in cargo traffic to 675m revenue tonne kms.
During the month there was eight days of strike action. The industrial action looks set to continue as workers voted against the airline’s latest pay offer and Air France’s chief executive quit the business.
Over the first four months of the year, demand is 1.7% down on performance over the same period in 2017.
Lufthansa was also affected by two days of strike action during April and as a result recorded its second weakest growth level so far this year, with a 3% improvement to 929m revenue cargo tonne kms. For the year to date, demand is up by 4.5% on 2016 levels.
However, capacity additions took their toll on the airline group’s cargo load factor, which declined to 67.2% compared with 69.5% last year.