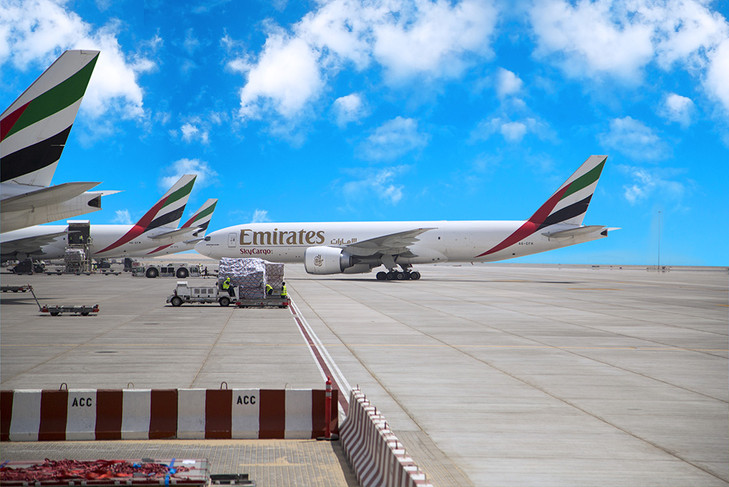 Emirates is weighing up further freighter orders after it took delivery of the final all-cargo aircraft on its current orderbook earlier this year.
The Dubai-headquartered carrier told Air Cargo News it was currently considering whether it would place further orders for freighter aircraft with a decision expected over the coming months.
Emirates SkyCargo divisional senior vice president cargo Nabil Sultan said: “At the moment all our freighters have been delivered, but we are looking at our options now on the next leap of capacity and how we want to acquire it. A decision will probably be made by the beginning of next year.
“We’re the midst of conducting detailed studies, looking at supply and demand and how the market is going to behave over the next five to 10 years and then based on that we will be able to draw a conclusion.
“But today there are various options of acquiring capacity at a competitive level so there are good options out there. We will look at our study and then perhaps come back with a more concrete plan.”
The airline currently has a fleet of 15 freighters: 13 Boeing 777s and two B747s. It took delivery of its 13th B777 aircraft in September.
Any new freighter aircraft would increase the airline’s cargo capacity, rather than act as a replacement for older aircraft being retired.
Sultan also provided an update on current market conditions and said there had been a pick-up in volumes over recent weeks in line with the peak season, something which had looked doubtful.
Overall, it had been a slow market for the last few quarters.
“If you look at the situation globally, the Asian market has been quite slow over the last two quarters; in China, we’ve seen decline in exports quarter after quarter.
“China to Europe we have seen a drop of around 15% and that has been the largest that I have ever heard of.
“Even to the US we have seen an almost double-digit market decline which is unexpected with the current US economy which continues to grow.”
However, it was not all bad news as Emirates Middle East and Africa region continued to grow and there had been signs of an improvement.
“The good thing is that over the last month or so we have started to see some improvement out of the Chinese markets and some of the European markets, and we hope that this is the start of a more sustainable trend.”
He said demand figures has also benefitted from several new product launches, including the iPhone 6s, which he hoped would see the industry through November and December.
He said the biggest challenge the industry had faced over recent months was yield declines caused by weakness in demand and lower fuel prices encouraging operators to bring laid-up, less fuel efficient aircraft back into service.
However, there had been an improvement in yields out of China recently, he said, which a couple of months ago had looked unlikely.
Sultan said that Emirates global network meant it was able to mitigate some of the market weakness by concentrating efforts on markets or sectors that were growing.
Another major development at Emirates SkyCargo over the last 12 months was the decision to adopt all-in rates.
Other carriers have followed the move, although the Lufthansa group of airlines have kept a single surcharge.
He said: “It was a bold step on our part but we were determined to implement it because that is what our customer was telling us to do and it did not make sense to ignore something that is so critical for the customer.
“The customers weren’t interested in complicated fuel surcharges, security surcharges, they just wanted a single rate.”