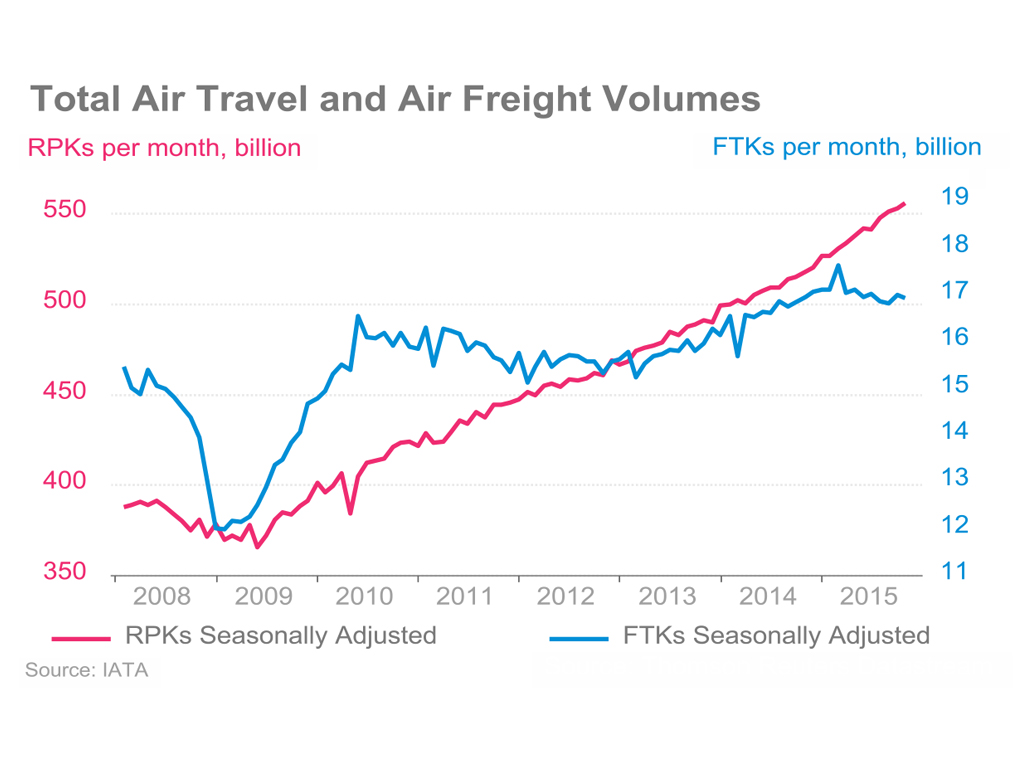 Freight-tonne-kilometres volumes fell back in October after showing signs of modest growth in the third quarter, said IATA in its latest Financial Monitor. Volumes fell in October compared with September, from around 17.5 billion FTKs to just over 17bn FTKs. And while passenger load factors reached a new record high of 80.8 in October, freight load factors remain at low levels not seen since mid-2009.
The decline was largely down to the performance of European carriers, whose recent positive growth went into reverse in October.
However, IATA says that business confidence indicators and trade figures for the region suggest that the downward pressure should ease in coming months.
In its Cargo Chartbook for the fourth quarter of 2015, IATA said that air cargo performance in 2015 has been weak and that the market has shrunk from levels seen at the end of 2014. While air cargo demand will continue to come under strain in late 2015 and 2016, “a sustained recovery in the Eurozone – a key market – can be a source of optimism.”
In-service payload capacity for wide body freighters increased for the third consecutive quarter, explained by a reduction of in-storage capacity and delivery of new aircraft. In-storage capacity remains comparable to historical highs but has slightly reduced as some aircraft have been brought back in service.
Furthermore, the pace of retirement of older aircraft has continued to slow, with retirements in the third quarter ceasing almost entirely.
Integrators and cargo-only operators each took delivery of about 35% of the new wide body freighter payload capacity in the third quarter and mixed fleet operators the remaining 30%. Non-integrator deliveries were concentrated in the Middle East and North Asia, with no new wide body freighter capacity being delivered to operators registered in the Americas.
International freight load factors have deteriorated as capacity addition outstripped traffic growth by 3.6% over the first nine months of 2015.
Lower load factors are in part expected as carriers optimize operations under lower oil prices, says IATA. However, the dip in both freighter utilisation and load factors, may also point to underlying weakness in demand. Ocean container yields have plunged due to overcapacity and weak demand and this may put pressure on some airfreight.
Air cargo yields largely stayed flat but a gradual downward slide continues taking other charges into account, but falling yields in 2015 will be less harmful to profitability as jet fuel prices have abated.
However, international yield performance varied significantly by trade lane and direction. For example, the average yields this year on the North/Mid-Pacific trade lane eroded more on traffic originating from Asia compared to traffic originating in North America. On the Europe-Asia trade lane, yields were slashed by 9% more than the fall in global industry yield performance.