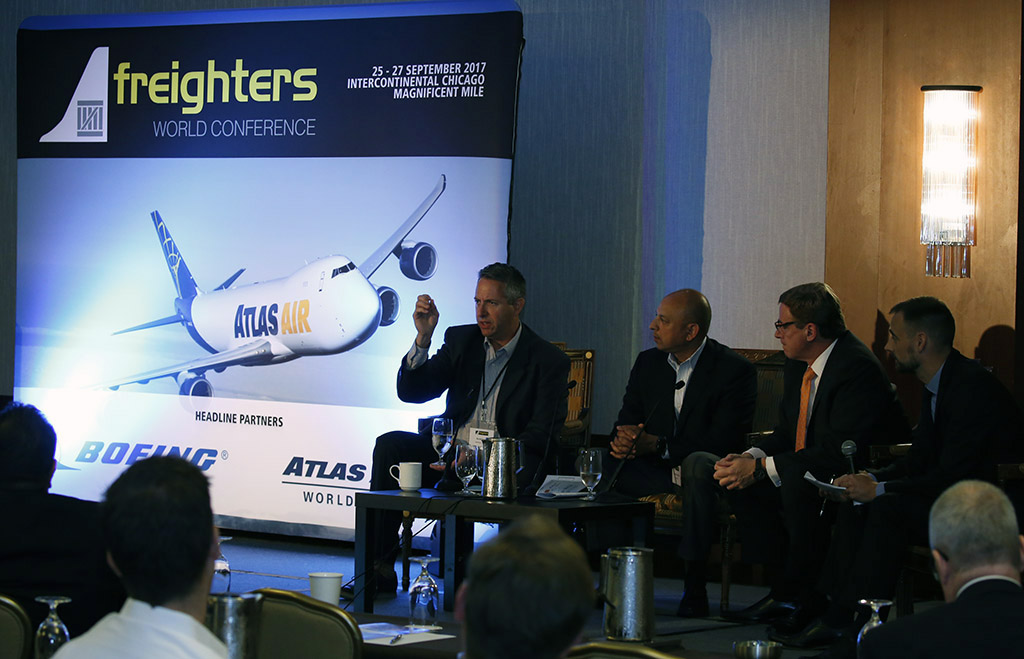 Freight forwarders say they are not concerned by airline attempts to bypass them and form direct relationships with shippers.
Speaking at the Freighters World conference in Chicago, a panel of freight forwarders responded to a report in the October issue of Air Cargo News that claimed IT solutions and the new the new IATA-FIATA Air Cargo Agreement would pave the way for airlines to engage directly with shippers.
In the report, one senior airline executive said his company was already taking steps to prepare for direct engagement with shippers.
In response, Flexport senior vice president and head of airfreight Neel Jones Shah told the Freighters World audience that it was inevitable that relationships would exist between airlines and shippers.
“I would say good luck to them with that because they are not easy to deal with,” he said. “There are so many other components of the supply chain that still need to be caroled and managed – the air piece is the easiest piece, arguably.
“There is so much that is going on pre-airport and post-airport that airlines certainly don’t want to touch and there is always going to be room for the freight forwarding sector to play a dramatic role in this business.
“Somebody has got to herd the cats and somebody has got to provide that level of information across the supply chain.”
Scott Case, president of the International Air Cargo Association of Chicago and founder of Position:Global, agreed with Shah, saying that a lot of supply chain knowledge had been lost from the shipper community because of the development of digital interfaces.
“Today, people are not geared for somebody that doesn’t know what they are talking about when they pick up the phone to ask for things.
“Airlines would much rather deal with the knowledgeable repeat forwarder than somebody that doesn’t understand the first most basic component and doesn’t know what they are talking about.”
He added that for some airlines, adding shippers to their customer portfolio was partly down to ego, with airlines wanting to promote the fact that they work with big name global brands.
Dachser USA president and chief executive Frank Guenzerodt added: “It happens already, there are some major shippers that deal directly with carriers but I think the flexibility of a forwarder to offer a range of carriers is a major selling point.
“I also think there is still a big necessity for a supply chain management company which helps you on a door-to-door basis, including all the technicalities and governmental requirements.”
The panel also looked at the differences between start-up “digital” forwarders and the more traditional companies and the progress of digitalisation and whether that would result in the industry losing the people element.
All three speakers agreed that there while many transactions would be carried out digitally, there would be a need for human input for the foreseeable future.
Guenzerodt said the industry had done a “fairly lousy job” at developing digital solutions.
“There are many air carriers and forwarders where we don’t communicate electronically on the really basic stuff. We could do a lot better on digitlisation in our industry," he said.
“As long as we have governmental agencies involved, there will always be a connect where we need some human interaction.”
Case agreed: “We can automate the process, but we will always going to need to have the subject matter experts that will be able to facilitate when the automated systems can’t execute in the way they need to.
“If somebody from the Food and Drug Administration in San Francisco, for example, gets upset about a shipment from one of your customers you are going to need a human to remediate that.”
Shah said there should be a marriage of people and software in the creation of supply chains and in order to meet customer service expectations. He added that he could not see end-to-end digital solutions in the near-term future.
He explained: “I don’t think there will ever be a solution that I see in my life time where this is going to be fully automated from end to end.
“There are just too many competing interests, there is too much regulation, there is a lack of electronic documentation and there are too many people working against you, not wanting that to happen because they profit from this.”
Read more freight forwarder news