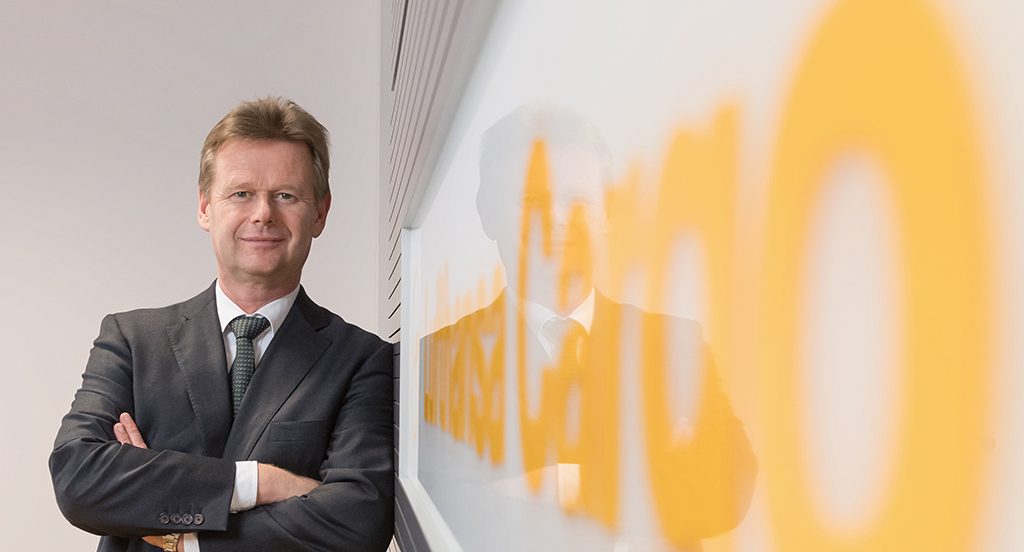 Lufthansa Cargo has warned that the airfreight boom of the last two years has come to an end after reporting an increase in profits last year.

The carrier generated over €2.7bn in revenue and a profit of €268m (adjusted EBIT) in 2018, the second-highest result in the German flag-carrier‘s history, on the back of its cost reduction programme, improvements at subsidiaries and increases in airfreight rates.

However, Peter Gerber, chief executive and chairman of the executive board of Lufthansa Cargo, warned that uncertainty in the global economy meant the demand surge felt in 2017 and 2018 had now come to an end.

He said: “What we clearly know is that the big airfreight boom of the last two years has come to an end in December last year.

“This is the first time in more than two and a half years that the market is shrinking. That is no catastrophe because the comparison is with [2017] numbers, which was the peak of the peak.

“When you look at the January and February figures, which are not yet finalised, what you see also there, is a slowing down of the market, although not as clear as in December.

“But this is typical for our industry. It is a bit of a rollercoaster and you can see that when you look at our results. We have good years, we have crisis  years and we have normal years, but there are more good years than crisis year.”

Gerber name checked the US-China trade conflict, Brexit and US shutdowns as some of the issues that are causing uncertainty, which in turn means businesses are adopting a cautious approach to the year ahead.

Despite the difficult outlook, Lufthansa Cargo will this year press ahead with its fleet modernisation and will sell the capacity of four new Boeing 777 freighters – two will be flown by its Aerologic joint venture – and will offload two of its aging MD-11Fs. Over the last few years it has also added the capacity of a number of partner airlines, including Brussels Airlines, Cathay Pacific and ANA.

Its passenger business is also taking on new aircraft, such as A350s.

Gerber was not concerned about the impact of the additional aircraft, stating that they would be added to trunk routes that could feed cargo into the overall Lufthansa Cargo network. It plans to phase out all its MD-11s by 2025.

He added that the airline would be flexible when it comes to capacity deployment and said that while China may see a decline in demand because of the trade dispute, production was being moved to other countries where it could add capacity.

Lufthansa is also positive about the longer term outlook – pointing to a growing population, a growing middle class, e-commerce, a faster product cycle, the rapid development of new technologies and consumers wanting products more quickly as some of the reasons for optimisim.

“Airfreight is essential for an accelerating world,” he said.

He also provided an update on the renewal of its cargo centre at Frankfurt (LCC), stating that it would invest €400m in centre. The cargo handling facility will be developed on a modular basis, with work expected to be completed by 2024.

There will also be further investment in digitisation and the carrier aims to the first to offer fully automated live spot rates to the market. It also plans to offer a fully digital check in process.

Said Gerber: “We will continue to systematically drive digitization along the entire transport chain. We are the first cargo airline in the world to offer our customers completely paperless booking and handling for standard cargo.

“With our new, fully digital PreCheck process, we will now significantly accelerate and simplify handling processes for our customers. And we will also continue to roll out the eDGD electronic dangerous goods declaration so that even more customers and shippers will be able to benefit from this digital solution.” 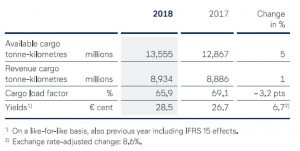 “Our employees have shown full commitment and done an amazing job for our customers. The result gives us additional momentum for new investments in the future,” said Gerber in a statement.

Martin Schmitt, board member for finance and human resources, added: “We managed to increase our revenue per unit and lower our unit costs last year. We will use the profit to modernize our means of production, which will further enhance our cost efficiency.”

Gerber was optimistic in his outlook: “The current year, unlike 2018, is again characterized by the weakness typical of the logistics market in the early months of the year.

“Given low global economic growth, this is currently being exacerbated by reports of Brexit and trade disputes. This means we will again face challenges in 2019, but we remain upbeat about the quarters ahead.” 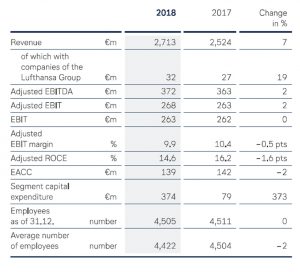 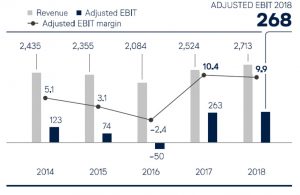 Source for all graphics: Lufthansa Cargo