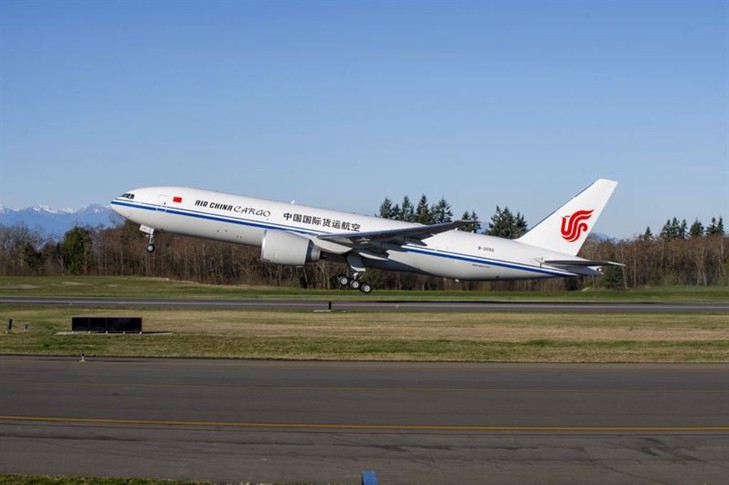 Air China Cargo saw yields and load factors come under pressure last year but managed to maintain profitability.
The cargo arm of Air China saw demand increase by 15.2% last year, one of the highest growth rates in the industry, to 6.6bn revenue freight tonne km (RFTK), while capacity was up by 18.1% to 12bn available freight tonne km.
As a result, its load factor slipped by 1.3 percentage points on 2014 levels to 54.7%. The cargo yield (revenue/RFTK) was Yuan1.29, a year-on-year decrease of 16.57%.
The cargo operator said that the decline in yield was caused by a downturn in the global cargo market.
Without revealing exact figures, the airline said it had managed to record a profit despite the unfavourable conditions in market demand and exchange rate effects.
To meet the challenging conditions it has changed route structures and targeted the express market.
“Against such a backdrop, Air China Cargo took proactive measures to improve freighter operations, adapted to market developments, optimised route structure and improved the efficiency of capacity allocation,” it said.
“The company has capitalised on the new routes to expand international cargo network, actively promoted new businesses and products, and strengthened mail, express delivery and special cargo services.”
To help improve express business the airline has expanded collaboration with third-party courier firms and launched logistic centres for online merchants.
Air China Cargo said it had also strengthened the combined passenger and cargo services and refined the management of belly capacity, thus maintaining its competitive advantage in belly space services.
This year the airline also plans to add a cold chain product.
When recently asked how it has managed to grow volumes so rapidly, the airline told Air Cargo News: “Air China Cargo was able to continue to optimise its route structure after completing the replacement of its fleet for US and European routes.
“The round-the-world route operated smoothly with a steady increase in cargo volume for the US to Europe sector.
“We have continued to upgrade our product range by adding very competitive high value-added and transit products. By enhancing our sales management, we have made use of passenger-cargo combination operation to achieve complementary advantages.”
During the year its cargo arm took delivery of two 777-200Fs, which swelled its all-cargo line-up to eight 777s, three 747-400Fs and four Boeing 757-200Fs (which are used chiefly to provide domestic linehaul for China Post).
The 747 freighters are deployed on intra-regional sectors and for charter work, whereas the 777s serve the carrier’s trunk routes to Europe and North America.
While it was a difficult year for the cargo division, Air China saw 2015 turnover increase by 3.9% year on year to Yuan110bn and profits attributable to shareholders jumped by 83.3% Yuan7.1bn.
Air China said the global aviation passenger market was strong in 2015 while low fuel prices helped to ease pressure on operating cost, intensified competition and substantial exchange rate fluctuations.