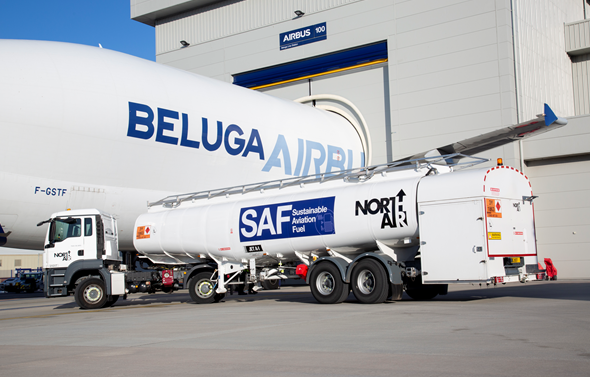 Airbus is extending the use of sustainable aviation fuel (SAF) for its Beluga cargo flights to the Broughton in the UK.

The airframer said that the north Wales line station, which uses the Beluga fleet to transport aircraft wings to Toulouse, Hamburg and Bremen, becomes the second Airbus European site to use SAF, after Hamburg introduced the fuel to its cargo activities at the end of 2019.

Sustainable aviation fuels are currently certified by regulators for up to 50% use in commercial flights; but the Beluga fleet operating from Broughton will initially be loaded with a 35% blend of non-fossil derived fuel, set to reduce CO2 emissions by more than 400 tonnes over the next three months.

The SAF used by the Beluga fleet is made from used sustainable feedstocks, such as cooking oil, and supplied to Airbus in Broughton and Hamburg by Air bp.

The last few months have seen a host of airlines and forwarders announce SAF programmes as the industry looks to reduce its impact on the environment.

CEVA Logistics and other Eco-Skies Alliance companies are working with United to collectively purchase approximately 3.4m gallons of SAF this year.

Brussels Airport’s Stargate project for greener aviation has been launched officially. Over the next five years the Belgian hub will…

Heathrow Airport has teamed up with Microsoft to trial the world’s first artificial intelligence system to combat illegal wildlife trafficking….

Tracking software BlueBoxAir allows airfreight stakeholders to calculate the CO2 emissions of each shipment in real time and in detail….