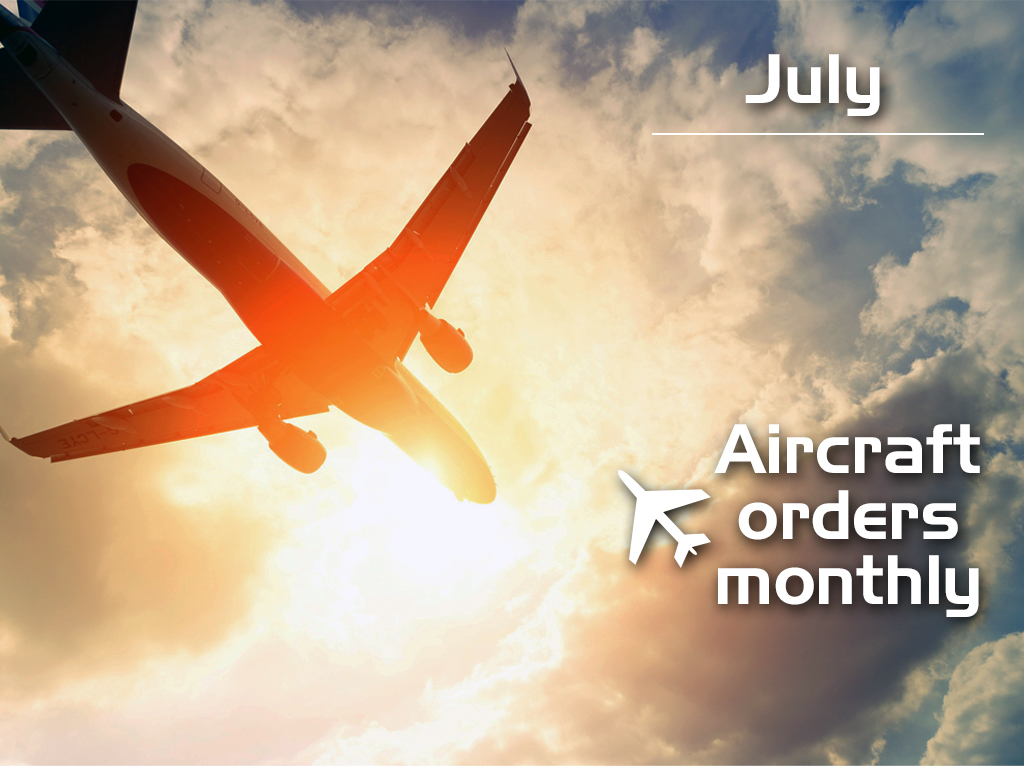 Each month Air Cargo News analyses the latest aircraft orders, both passenger and freighter.
Boeing signs freighter-logistics deal with Volga-Dnepr
As previously reported by Air Cargo News, Boeing signed a deal at the Farnborough Airshow with Russian heavylift airline Volga-Dnepr Group for 20 747-8 Freighters, including four that have already been delivered. It also includes an agreement for long-term logistics support for Boeing Commercial Airplanes and its partners using Boeing 747-8 and Antonov 124-100 freighter aircraft.
A long-term operator of the 747-8, Volga-Dnepr will use the new aircraft to increase the fleet of its AirBridgeCargo subsidiary and replace 747-400s through a mix of direct purchases and leasing over the next six years.
Volga-Dnepr currently operates 12 Antonov 124-100, 5 IL-76TD-90VD, 16 Boeing 747s (five Boeing 747-400ERFs, three Boeing 747-400 Freighters and eight Boeing 747-8F Freighters) and three Boeing 737-400Fs.
It is one of the leading carriers of aerospace cargo, which generates over 30% of its revenues.

Buyers snap up conversions
Boeing announced 10 new orders and for its converted freighters (BCF) program at Farnborough. Two 737-800BCFs go to Cargo Air, based in Sofia, Bulgaria, and two more to LAS Cargo, in Bogota, Colombia. Air Algerie also signed a commitment for two of the type and an unidentified customer ordered four 767BCFs.
Since launching the programme in February, Boeing says it has won 22 firm orders for the 767BCF and up to 59 orders and commitments for the 737-800BCF, many of them for the express cargo market. The first 737-800BCF is expected to be delivered in the fourth quarter of 2017.
DHL Express has signed a contract with Airbus-ST Aerospace joint venture EFW to convert four Airbus A330-300 passenger aircraft into 61-tonne payload, 26-pallet, freighters. EFW will carry out the work at its Dresden site from July, and the aircraft are scheduled to be delivered to the express carrier by the end of 2017.
And Mexican airline Aeronaves TSM has ordered its fourth MD-82SF freighter conversion from Aeronautical Engineers for its DHL operation. The aircraft is due to be re-delivered to the carrier in early 2017 after the work has been carried out by AEI’s Commercial Jet in Miami.
In early June, Aeronautical Engineers said it had signed an agreement to provide up to 30 twelve pallet position Boeing 737-800SF conversions for an undisclosed customer. The agreement includes 15 firm orders with an additional 15 options. The modifications for the customer will begin in late 2018 with deliveries beginning in 2019.

Go Air on the move with Airbus
Airbus is to spearhead Indian low-cost airline Go Air’s expansion plans after it signed a memorandum of understanding (MoU) for 72 A320neo aircraft at the Farnborough International Airshow.
The Wadia Group owned carrier signed a similar agreement for 72 A320neo in 2011, the first two of which were delivered in June.
Go Air plans to expand its network and, with 144 aircraft, will be one of the leading operators of the type.

AirAsia firms up 100-strong A320 order
Also at the Farnborough show, AirAsia signed a firm order with Airbus for the purchase of 100 A321neo aircraft – its first order for the largest model in the A320 Family. It brings the low cost carrier’s total number of A320 Family aircraft orders to 575, making it the largest airline customer for the Airbus single aisle product line. To date, over 170 A320s have already been delivered to AirAsia and are flying in Malaysia, India, Indonesia, Japan and the Philippines.

Avianca owner buys 62 Airbuses
South America’s Synergy Aerospace Corporation, largest shareholder of Colombia-based Avianca and owner of Avianca Brasil, has finalised a purchase agreement for 62 Airbus A320neo Family aircraft. They will form the basis of Avianca Brasil’s fleet renewal and network growth strategy.
Synergy became an Airbus customer in 2007 when it ordered 10 A350 XWBs. Avianca Brasil currently operates 40 A320 Family aircraft and one A330 Freighter.

Norwegian takes a long view
Low cost carrier Norwegian has converted part of an order signed in June 2012 for 100 Airbus A320neo aircraft to 30 A321LR aircraft instead. The A321LR, the latest member of the A320neo Family, will be able to fly longer routes of up to 4,000 miles, the longest range of any single aisle airliner, making it ideal for transatlantic routes and enabling airlines to tap into new long haul markets not previously accessible with current single aisle aircraft. First deliveries will start in 2019.
Kuwait-based lease and finance company ALAFCO has also changed an order of ten A320neos to A321neos. It forms part of an agreement signed in 2012 for 85 A320neo aircraft.

Donghai orders more Boeings
Donghai Airlines has revealed plans to purchase 25 737 MAX 8s and five 787-9 Dreamliners as part of its plan to move from being a cargo to a passenger carrier. Shenzhen-based Donghai Airlines had previously ordered 15 Next-Generation 737-800s and 10 737 MAX 8s in 2013, having begun freighter operations in 2006. It currently has a fleet of 11 Boeing 737-800s serving over 10 cities across China.

Xiamen plans 737 purchase
All-Boeing China Southern subsidiary Xiamen Airlines signed a memorandum of understanding for the purchase of up to 30 737 MAX 200 aircraft, valued at up to $3.4bn, at the Farnborough International Airshow. The agreement requires the approval of Xiamen Airlines board and the China Southern Airline Group board, as well as the Chinese Government. The carrier plans to increase its current 140-strong fleet to 200 aircraft by the end of the decade and will expand regionally with the new 737 MAX.

Virgin takes a dozen A350s
Virgin Atlantic Airways is to add 12 Airbus A350-1000 aircraft to its fleet in 2019 and 2020 for its services out of London Heathrow and Gatwick airports. The airline is purchasing eight A350-1000s – the largest member of the widebody A350 family – for deliveries commencing in 2019, and four new aircraft on long term leases from ALC from 2020. There is also a lease option for a fifth aircraft.
The aircraft will be deployed initially at London Heathrow on transatlantic routes and subsequently at Gatwick airport on services to the Caribbean.
The long-range A350 XWB features the latest aerodynamic design, reduced weight thanks to a carbon fibre fuselage and low emission Rolls-Royce Trent XWB engines that together deliver a 25 per cent reduction in fuel burn.

Germania firms up on 25 A320s
Germania Group placed a firm order for 25 Airbus A320neos at the Farnborough International Airshow. The carrier currently operates an Airbus fleet of ten A319s and five A321s to destinations in Europe, North Africa and the Middle East from mainly German, Swiss and UK bases. Berlin-based Germania is also the charter service provider for Airbus’ double daily flights between its production sites in Toulouse and Hamburg.

China carrier firms up Dreamliner deal
Yunnan, China-based Ruili Airlines has finalised an order for six 787-9 Dreamliners, its first widebody aircraft. The carrier announced an intent to order in May.

Vietnam’s Jetstar goes direct
Vietnam’s Jetstar Pacific Airlines signed a Memorandum of Understanding with Airbus for 10 A320ceo aircraft at the Farnborough Air Show – its first direct purchase from the manufacturer. Based in Ho Chi Minh City, Jetstar Pacific is a joint venture 70% owned by Vietnam Airlines and 30% by the Qantas Group. It currently operates a fleet of 12 leased A320 Family aircraft.

JetBlue amends order
New York-based JetBlue Airways has amended its purchase agreement with Airbus to include an additional 15 Airbus A321ceo and 15 A321neo aircraft.

Allegiant declares loyalty to Toulouse
Nevada’s Allegiant Travel has signed a purchase agreement for 12 Airbus aircraft, the first time the low-cost airline has purchased new aircraft from any manufacturer. Allegiant currently operates a fleet of 15 A319ceo and 16 A320ceo aircraft.

TUI takes ten 737s and a Dreamliner
Leisure carrier TUI Group has  finalised an order for 10 737 MAX 8s and one 787-9 Dreamliner – the latter previously attributed to an unidentified customer.

Kunming has its mind on higher things
Kunming Airlines has signed an MoU with Boeing for 10 737 MAX 7 aircraft, making it the launch customer in China for the type. All-Boeing operator Kunming, in which Shenzhen Airlines is a major shareholder and is based at based at Changshui, chose the aircraft for its performance out of high altitude airports.

Mystery buyer for Boeings
Boeing said it had received a commitment for 30 737 airplanes from an unidentified Chinese customer at the 2016 Farnborough Airshow – a mix of 737 MAX and Next-Generation 737 airplanes, valued at more than $3 billion at current list prices.
Standard Chartered Bank has also unveiled an order for 10 Next-Generation 737-800s from Boeing, again for an unidentified customer.
Air Lease Corporation has formally announced an order for six 737 MAX 8s. Three are new, and the others were previously attributed by Boeing to an unidentified customer.

..and mysteries revealed
Malaysia Airlines said that it would be buying 25 Boeing 737 MAX 8 aircraft, flagged up earlier by the plane maker for an unidentified customer. Spanish-based  Air Europa has announced an order for 20 737 MAX 8s, also previously unidentified, while Egyptair similarly revealed that it was behind an order for nine Next-Generation 737-800s.

Air Lease signs for four Airbuses
Los Angeles-based Air Lease Corporation announced a firm order for three A350-900s and one A321 at the Farnborough Airshow. It brings its portfolio of Airbus aircraft to 267, of which 70 are widebodies.

Arkia orders A330s
Arkia Israeli Airlines is to receive up to four A330-900neo aircraft, making it the first Airbus widebody customer in Israel. The A330neo aircraft will spearhead the carrier’s expansion into long-haul and leisure markets. ARKIA became an Airbus customer in 2012 with an order for four A321neo aircraft.

WOW sticks with Airbus
Iceland-based all-Airbus operator WOW has signed a firm order for four more A321s, its first purchase agreement directly with the manufacturer. WOW currently has 11 aircraft in its fleet to date which will grow to 12 by the end of 2016.

Malibu mixes A330 order
Manila-based Cebu Pacific has placed a firm order with Airbus for two A330-300s. They will join an existing fleet of six A330s, flying on long range flights to the Middle East and Australia, as well on selected domestic and regional routes.

Aer Lingus exercises Airbus options
Ireland’s Aer Lingus is to exercise options for two A330-300s. The carrier currently operates eight A330s, already due to increase to 10 such aircraft in 2016.

Follow-up from Air Côte d’Ivoire
Air Côte d’Ivoire has signed a firm order for the purchase of an additional A320neo, after becoming the first African airline to order the type last spring when it placed an order for four aircraft.

Dublin leaser orders Airbuses
The sole aircraft deal announced by major manufacturers in June was by Dublin-based leading aircraft leaser AWAS, which ordered for an additional 15 A320 Family aircraft, comprising 12 A320ceo and three A321ceo aircraft. AWAS now has 95 cumulative orders to date for the single-aisle A320 Family aircraft, comprising 89 A320s and six A321s.