Airfreight demand and load factors take a tumble in February 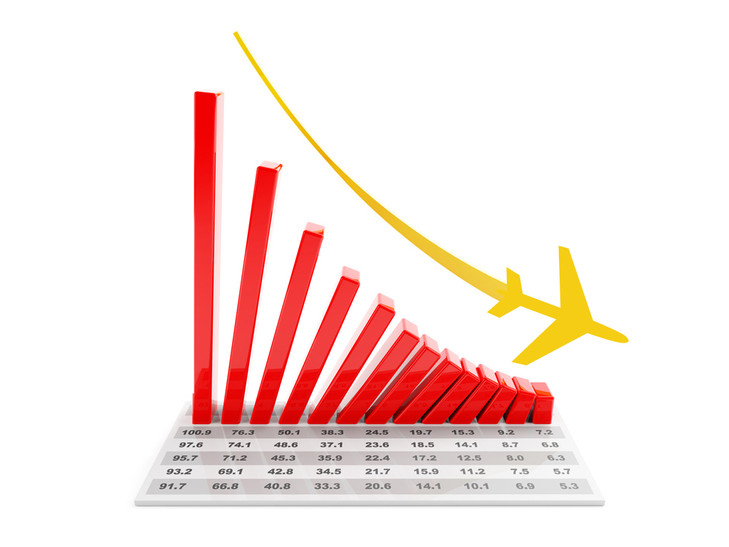 Air cargo demand and load factors slipped in February but figures are skewed by strikes at US seaports last year and the date of the Chinese New Year.
The latest IATA figures show that freight tonne kms (FTKs) slipped by 5.6% year on year in February while capacity was up by 7.5%.
As a result of supply growing and demand declining, cargo load factors (see bottom of page) slipped to 41% compared with 46.5% at the same point last year.
The airline organisation said that the decline in demand was a reflection of last year’s strikes at US west coast ports, which saw much seafreight demand transfer to air, and the fact that Chinese New Year factory closures, which cause a demand rush, fell earlier in the month.

These two factors are reflected by the fact that carriers based in the Asia Pacific region, which would have been affected by both the strikes and New Year rush, recorded the largest demand decline of 12.4%.
IATA said some of the effects of the Chinese New Year and port strikes can be stripped out by looking at January and February combined, which results in a 1.6% decline year on year.
Compared with January and February 2014, demand was actually 6.3% higher this year.
“This translates into annual growth of 3.1% over the past two years – a relatively solid growth rate by the post-global financial crisis standards,” IATA said.
“Looking ahead, ongoing headwinds continue to point to another year of just modest growth in 2016 as a whole.
“Indeed, the broader global trade backdrop remains subdued; world trade volumes grew by 2% in 2015 as a whole, slower than the estimated pace of global GDP growth.”
However, the organisation expected a strong pickup in demand during the next quarter, which was weak last year.
IATA said the low load factors, which were just 0.5 percentage points behind the all-time February, continued to put pressure on yields.
The latest figures from analyst Drewry show that prices in February stood at $2.57 per kg, compared with $3.17 during the same month last year.
Looking at performance regionally, African airlines’ FTKs declined by 1.7% in February compared to February 2015.
“The largest economies in the region, Nigeria and South Africa, have suffered from the commodity slump over the past 18 months,” IATA said.
Asia-Pacific carriers, which carry almost 39% of all airfreight, saw FTKs contract by 12.4% year-over-year in February.
IATA said while this was the largest drop of any region, it also reflects the region’s carriers having benefited the most from the 2015 US port strike and the region’s weak trading backdrop was exaggerated by the closure of many factories in Asia for the Lunar New Year Celebration. In February Chinese export values fell 25%.

European airlines’ cargo demand fell by 2.4% in February. “Business surveys of the region, particularly in Germany, do not give an upbeat assessment of prospects in the region,” IATA said.
“This is in line with the trend since the Global Financial Crisis: European freight volumes are barely any higher than in 2008.
Latin American carriers expanded by 2.7% in February. IATA pointed out that markets in the region remain under pressure and Brazil is in its worst recession in 25 years. Volumes on the North-South American routes, however, are holding up.
Middle Eastern carriers saw demand expand by 3.7% in February. Over the past six months the major carriers in the region have cut their rate of route expansion, which may account for the relative slowdown in freight volume growth, IATA explained.
Finally, North American airlines saw FTKs fall 4% in February compared to February 2015. IATA said prospects for cargo growth will depend on the balance between a stronger domestic economy supporting import growth and a strong US dollar dampening exports.