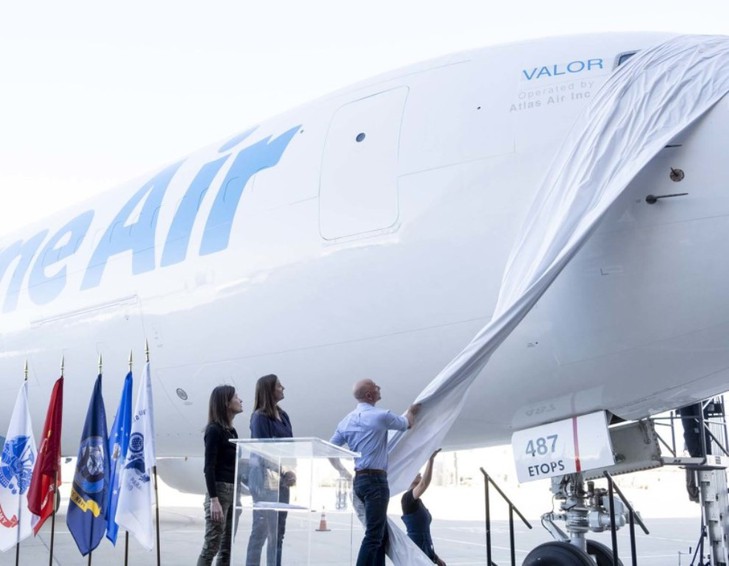 Amazon Air is expanding its network with the lease of a further 10 Boeing 767-300 freighters from lessor ATSG, with options for even more.
The move will bring the e-commerce giant’s fleet of aircraft to 50 – it leases a further 20 from ATSG and 20 from Atlas Air – when all the aircraft are delivered in two years.
The ten aircraft will be leased from ATSG subsidiary Cargo Aircraft Management (CAM) and operated by one of the company’s airlines.
CAM will deliver five of the B767s in 2019 and the remainder in 2020. All of the leases will be for 10 years, with the possibility to extend them for up to three more years.
Amazon will also have the option to lease a further 17 cargo aircraft by January 2026 if it increases its shareholding (see details below) in ATSG.
The deal will also see ATSG extend its five-year leases of twelve B767-200F aircraft by two years into 2023, with an option to extend for up to three additional years, and its existing seven-year leases of eight B767-300F aircraft by three years until 2026 and 2027, with an option to extend for up to three additional years.
Yesterday, ATSG announced it had secured an additional 20 B767 aircraft for conversion from Jetran.
Amazon began its air operations in 2016 as it sought to gain more control over its network and meet customer demand for faster delivery.
The move was widely expected as Amazon will have 100 aircraft parking spaces at the hub it is developing at Cincinnati/Northern Kentucky Airport.
“With advanced algorithms and software used for capacity and route planning, the Amazon Air operation can transport hundreds of thousands of packages per day,” Amazon said in a statement.
“In addition, with Amazon’s dedicated air network, Amazon is able to deliver packages to its customers faster – 40 aircraft are flying in and out of gateway operations at over 20 airports, making two-day shipping possible almost anywhere in the US.”
Amazon senior vice president of worldwide operations Dave Clark said: “Our customers love massive selection and fast delivery, and the Amazon Air capacity we are building enables Prime delivery speeds for customers from Seattle, Washington to Miami, Florida.
“By expanding the Amazon Air network through our partnership with ATSG we’re able to ensure we have the capacity to quickly and efficiently deliver packages to customers for years to come.”
ATSG president and chief executive Joe Hete said: “We’re pleased to expand and extend our partnership in support of Amazon’s exceptional ability to provide reliable and fast delivery to its customers.
“As the world’s leading source of customer-dedicated 767 cargo aircraft, we have the access to aircraft and are uniquely qualified to support Amazon for many years to come.”
He added: “We view the prospect of a strong, growing customer like Amazon becoming a significant equity holder as a positive for all ATSG stakeholders.
“Our mission is to provide Amazon with exceptional service while creating equity value for all of our shareholders.”
Over the last few weeks Amazon has announced plans to open several new air hubs, including a new Regional Air Hub at Fort Worth Alliance, while it will spend $1.5bn on its new air hub at Cincinnati/Northern Kentucky Airport
Amazon also recently announced a gateway operation to launch in Wilmington, Ohio, in 2019 as well as an expanded operation in Rockford, Illinois.
Speed of delivery is becoming a key selling point for the Amazon online service.
It has launched several initiatives to ensure fast delivery speeds and supply chain capacity for its customers, including its Delivery Service Partner program, Amazon Flex, the company’s mobile application that allows individuals to sign-up, be vetted and begin delivering for Amazon, a dedicated network of over 10,000 trailers to increase trucking capacity and, now, the expanded fleet of air cargo planes.
“These efforts join Amazon’s robust worldwide network of more than 185 fulfillment centers where the company uses high-end algorithms, robotics, machine learning and other technological innovations to increase delivery speeds for customers,” the company said.
“Amazon is now bringing the same technological expertise to efforts in the transportation space to increase shipping capacity for customers.”
Increased Ownership
As part of the deal for the additional ten aircraft and the extension of the current leases, Amazon will be issued warrants to expand its potential ownership stake in ATSG’s equity to approximately 33.2%.
Under terms of the commercial agreements executed in March 2016, Amazon already holds, or has rights to receive, warrants for the purchase of ATSG shares that would represent a 19.9% ownership stake in ATSG, if exercised prior to their expiration in March 2021.
And if the e-commerce firm takes up options of the additional 17 aircraft, Amazon will be able to earn further incremental warrant rights, increasing its potential ownership in ATSG’s equity from 33.2% up to 39.9% of ATSG’s fully diluted common shares currently outstanding.
Read more Amazon Air news
Click here for a free digital subscription