A new report suggests that Amazon Air’s freighter fleet could hit 200 aircraft in 2028 as it opens its Cincinnati hub and expands international flights.

The report from Joseph Schwieterman and Jacob Walls of the Chaddick Institute for Metropolitan Development predicts that the e-commerce giant’s fleet will grow from its 39 aircraft at the end of 2019 to 200 by 2028.

The report authors point out that this equates to a compound annual growth rate of 19.9%, which is less than half the growth rate achieved between 2017 and 2019 when Amazon’s fleet increase from 18 to 39 aircraft.

“The completion of facilities at Cincinnati (CVG) [which will reportedly have space for 100 aircraft] and expansion in international markets could result in growth for the next several years well above 20%, allowing for more modest growth in the latter part of the period and still achieving the 200-plane threshold,” the report states.

“It should also be noted that some of the expansion could be in the form of smaller airplanes, similar to the those (including twin-engine turboprops or the Cessna 208B Super Cargomaster equipment used by FedEx Express) used on many feeder routes operated by contract carriers for FedEx, or through the acquisition of another cargo airline.

“It is unlikely that shortages of equipment will be a deterrent to growing at this pace. It would require Amazon Air to add, on average, about 1.5 planes per month through 2028.

“If Amazon reaches the 200-plane threshold, its fleet would likely remain well under a third as large as FedEx’s, when equipment operated by contract carriers for this Memphis-based carrier is included. As such, there are compelling reasons to believe that the 200-plane estimate is reasonable.”

The report also found that the Amazon Air network now makes around 100 flights a day and is primarily designed to augment the services of DHL International, FedEx, and UPS by filling critical links between its fulfillment and sorting centers, rather than being designed to replace them outright, although the authors say it is also looking to reduce its reliance on the integrators. 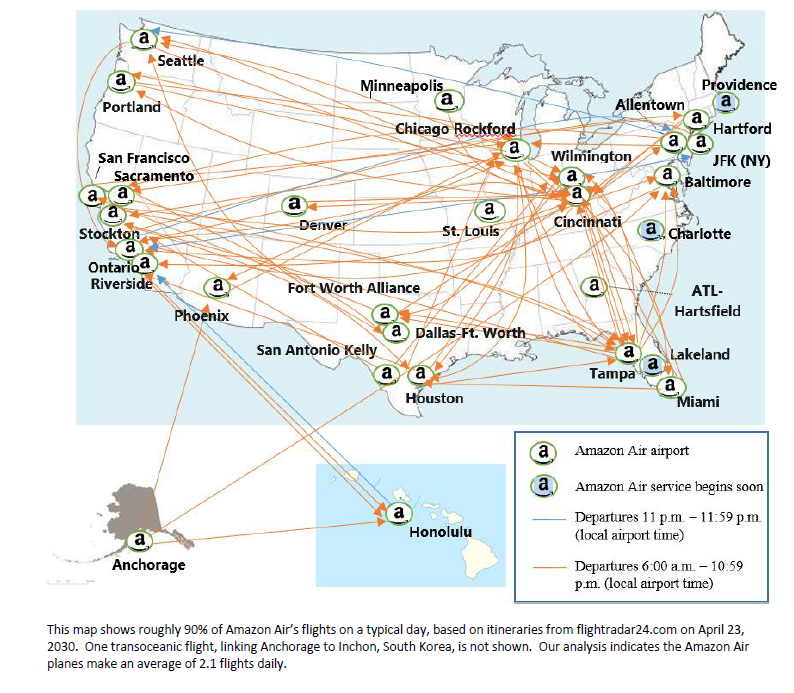 “Amazon Air’s network emphasises proximity to its fulfillment centers, many of which are a considerable distance from dense urban centers,” the report states.

“The company has a network in which flights do not necessary arrive or depart at locations close to the customer but instead are integrated with Amazon’s vast network of trucking routes to close the spatial gaps.

“Several major cities, such as Detroit, Kansas City, Indianapolis and Salt Lake City, for example, are not served by the airline but are within an eight-hour drive (and in most cases only a few hours) from one of its airports. Service to Charlotte, Providence, and San Bernardino, is expected to commence soon.”

It added: “Our analysis also suggests that there could be a need for additional airports on the Amazon Air system in the Northeast and Mid-Atlantic regions, as well as in metropolitan Chicago.”

However, the opening of its Cincinnati hub could change how its network is utilised, allowing it to increase its transhipment operation, as well as provide direct links between sorting facilities.

The development of the Cincinnati hub is facilitated by an agreement with DHL, which it partners with on international flights, allowing for the cross-utilisation of facilities. 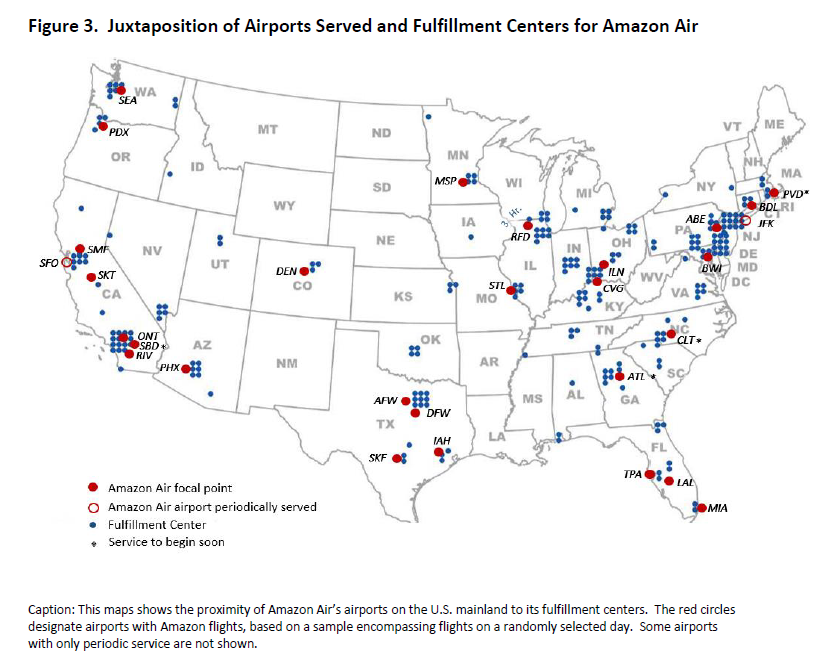