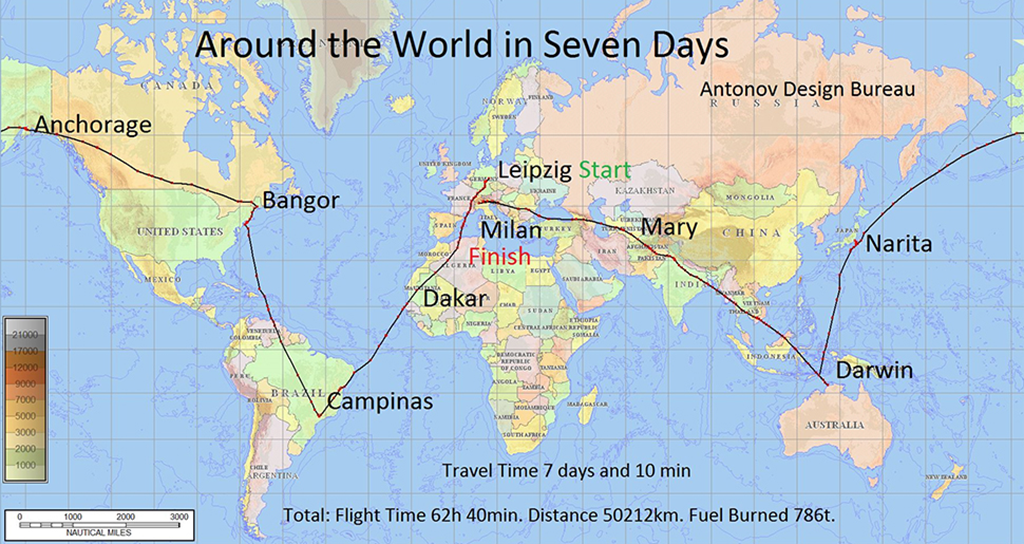 An Antonov Airlines’ An124−100 Ruslan aircraft flew around the globe one and a half times, performing a series of commercial flights
One of Antonov Airlines’ freighters flew from Mary International Airport, Turkmenistan to Helsinki, Finland, where it took on board commercial cargo consisting of industrial heat exchangers, weighing a total 54 tonnes.
The following day, the aircraft arrived at the cargo destination point, at Campinas, Brazil, making two interim landings at Leipzig, Germany, and Dakar, Senegal. The cargo was delivered to Brazil’s Viracopos International Airport.
The aircraft then flew to Bangor, Maine, in the US to transport water purification plants, weighing a total of 58 tonnes, to Darwin, Australia. Interim landings were performed in Anchorage, Alaska, and Narita, Japan.
From Australia, the freighter returned to the city of Mary in Turkmenistan, before flying to Milan, Italy, where it took a 62−tonne cargo on board to deliver it to Rio de Janeiro, Brazil.
During this expedition, the Ruslan covered a total of 62,000 km, which is one and a half times the length of the equator.
Mikhail Kharchenko, director of Antonov Airlines, said: "September 2017 was one of the most productive months for Antonov Airlines over the last two years. Commercial operations were performed by five of our An124−100s with flights duration at a total of 500 hours.”