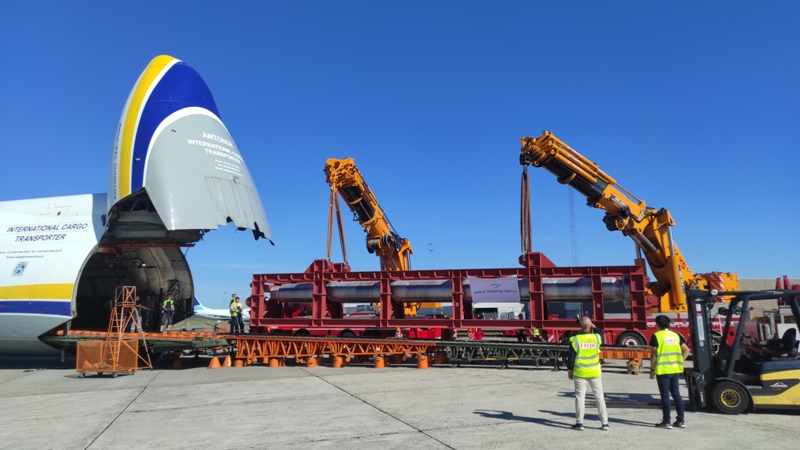 Antonov Airlines and charter broker Elite Aviation recently transported a tail shaft packed in a cradle between the UAE and Denmark utilising one of the carrier’s AN-124-100 aircraft.

The cargo weighed 82 tonnes and its flight from Sharjah to Billund was “one of the most challenging” transportation projects of the year, said the carrier.

“It was a real challenge for consignee and Antonov as well as for airports’ services team,” said Andriy Nazarenko, flight manager, Antonov Airlines. “Loading of cargo required operation on the maximum allowed crane boom lifting height.”

Dmytro Prosvirin, head of commercial bereau, Antonov Airlines, added that the extremely hot weather required the departure to take place during the night when the temperature was at its lowest.

Eric Philip from Elite Aviation who was on the ground supervising the operations, added: “It was a challenging project and especially at Sharjah airport loading/offloading operations needed to be finished during daylight as night operation was not allowed. So, all teams (crew and handler) involved needed to make sure that no mistakes happens to make it smooth and successful.”

The carrier’s home base was earlier this year moved to Leipzig in Germany due to the war in Ukraine.

The airline’s base at Kyiv-Antonov airport in Hostomel was destroyed at the outbreak of the war along with its AN-225, an AN-74 and an AN-26-100 aircraft. One AN-124 and one AN-22A were damaged.

The Antonov team has been able to relocate to Leipzig from where the company plans to continue the operation of its remaining five AN-124-100 aircraft.

Earlier this week, Ukrainian technology company Awery Aviation Software pledged its support for an initiative aimed at the protection and development of Ukraine’s aviation industry, including the rebuilding of the Antonov Mriya AN-225 freighter.