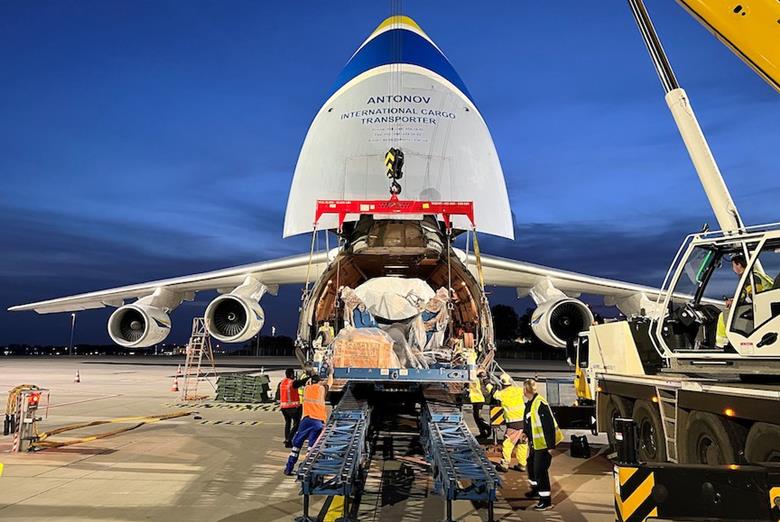 Antonov Airlines and Air Partner have provided an urgent AOG cargo charter solution to move an oversized aircraft engine and critical tooling from Luxembourg to a remote island in the Azores.

The operation entailed flying a working engine and tools weighing around 75 tonnes to the island of Lajes and bringing back a broken engine.

The first stage of the operation saw a B747F transport the working engine from Miami to Luxembourg.

The working engine and tools were then flown from Luxembourg out to the Portuguese island using an Antonov AN-124-100.

The cargo, including a replacement aircraft engine, empty stand, tooling and lifting beam, was loaded and offloaded the AN-124-100 using OPTG-120M loading equipment in conjunction with an external crane.

A 48-ton mobile crane, along with a driver and rigger, was also sourced by Air Partner team and loaded on the AN-124-100 and flown to Lajes due to the unconfirmed availability of suitable mobile lifting equipment on the island.

The AN-124-100 then flew the broken engine, empty stand and mobile crane to Stansted Airport in the UK.

The mobile crane was repositioned back to the base in Europe, and the broken engine and tooling were trucked to Amsterdam for onward scheduled flights.

“Challenges we met during this transportation kept all the teams a little stressed. Thanks to Air Partner’s and Antonov’s highly professional specialists we successfully delivered the sensitive cargo to the destination.”

Jack Burt, vice president of freight US at Air Partner, added: “The Antonov AN-124 aircraft was ideal for this charter flight and the service provided by the Antonov airlines staff and crew was world-class.

“We are proud to have worked with such great partners and delivered such a great product for our client with this project flight.”