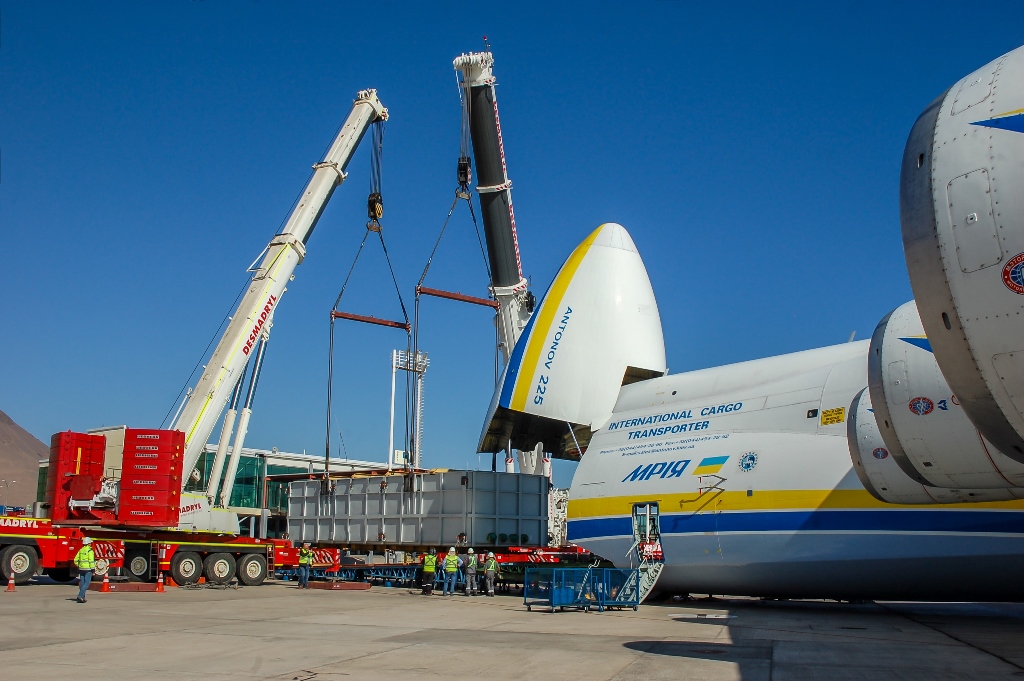 Antonov Airlines has completed 12 consecutive 160 tonnes flights utilising the world’s largst aircraft, the AN-225.
The operation saw Antonov Airlines, in partnership with Hansa Meyer Global Transport, transport twelve Heat Recovery Steam Generator (HRSG) modules between Chile and Bolivia.
Each module is weighs 160 tonnes and the height of the cargo meant it could not be loaded, even onto the biggest aircraft in the world.
To get around the problem, adjustments were made to the units’ lifting points.
“The amended design, which featured bolted joints, allowed us to remove the lifting points from the cargoes when they were installed on the loading ramp, which in turn reduced the cargoes’ height”, said Andriy Blagovisniy, commercial director, ANTONOV Airlines.
“Upon arriving at the destination, we pulled the cargoes out to the loading ramp, and the specialists on-site reinstalled the lifting points on their initial positions, tying them with bolts for subsequent lifting and offloading using external cranes.”
“Special damping panels and reverse bend technology were introduced to tackle the weight distribution of the cargo,” added Blagovisniy.
“Our flight crew received special training that took into account the design features of the cargo, to meet the maximum permitted g-forces during takeoff, in flight, and landing.”
Antonov Airlines had to design a special low-profile loading system for the HRSG modules as a consequence of the height of the cargo.
The weight distribution of the single-piece cargo on the aircraft floor initially exceeded maximum permitted values for the AN-225.
Also, specificially for this project, the company used as special lashing pattern allowed for welding of a calculated number of lashing points and special winching points for the cables of the aircraft winches.
Read more freighter operator news
Sign up to receive Air Cargo News direct to your inbox for free