ASL Aviation Group of Ireland has acquired the airline operations of TNT Express, comprising TNT Airways in Belgium and Pan Air Líneas Aéreas in Spain.
The two airlines are to be renamed ASL Airlines Belgium and ASL Airlines Spain respectively, bringing the number of airlines in ASL’s portfolio to nine.
ASL’s offer to acquire the two TNT Express carriers was announced on February 5 this year and was conditional on the intended acquisition of TNT Express by FedEx. On May 18, the FedEx offer to acquire TNT was declared unconditional.
In conjunction with the transaction, ASL has entered a multi-year service agreement to operate flights for the new FedEx-TNT combination. ASL will continue to serve multiple airline customers.
Headquartered in Dublin, ASL is an established operator with airlines in Europe, Africa and Asia. The group also includes a number of aviation support companies and leasing entities.
ASL’s airlines operate scheduled, ACMI and charter passenger and cargo flights on six continents under its own brands and for a range of global customers.
A staff of 580 people from the two airlines have transferred to ASL as a part of the acquisition and the total number of global staff in the ASL group is now 2,500 from 51 nationalities.
The employees’ current terms and conditions of employment will be respected and it is intended that the TNT Airways facilities in Liège, Belgium and Madrid, Spain will be maintained as the corporate offices of ASL Airlines Belgium and ASL Airlines Spain. TNT Express’ Liège hub (Eurohub) is not part of the airlines sale.
Said a spokesman for ASL: "There will be no service interruption as ASL Aviation Group has immediately taken over the flights operated by TNT Airways and Pan Air Líneas Aéreas. In addition to continuity of service delivery this change of ownership and control of TNT’s airline operations ensures compliance with European Union airline ownership and control rules."
The addition of the 35 aircraft in the two airlines brings the total ASL fleet to over 130 cargo and passenger aircraft.
As part of the transaction, ASL expects that the airlines "will maintain contracts with partner contractors, suppliers and airlines which currently operate an additional 20 aircraft daily for TNT Airways".
This brings the operational ASL fleet to over 150 aircraft from ATR42 turbo props to Boeing 747s.
Hugh Flynn, chief executive of ASL Aviation Group, said: “This is a key strategic step in the continued growth of ASL Aviation Group and I am delighted to welcome the people of TNT Airways and Pan Air to ASL.
"They have made a huge contribution to their airlines and they have now become valued members of our global family of airlines operating on 6sixcontinents.”
“ASL has been providing air services to both FedEx and TNT since the early 1990’s and it’s a tremendous privilege now for ASL Aviation Group as an air service provider to play a major role in what these two excellent companies, FedEx and TNT, have built up over many years.”
Flynn continued: “We operate in a highly competitive market and our continued growth is founded in our mission to be the preferred neutral service provider and to always exceed our customers’ expectations. We will continue to use our strength and stability to offer the most competitive and the best possible service to all of our customers.”
Tex Gunning, chief executive of TNT, said: “I wish to thank the employees of TNT Airways and Pan Air for their dedication to serving TNT and its customers. We’re looking forward to a successful cooperation.”
Financial details of the transaction are "confidential and cannot be disclosed". 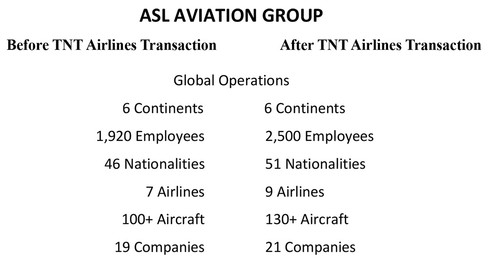