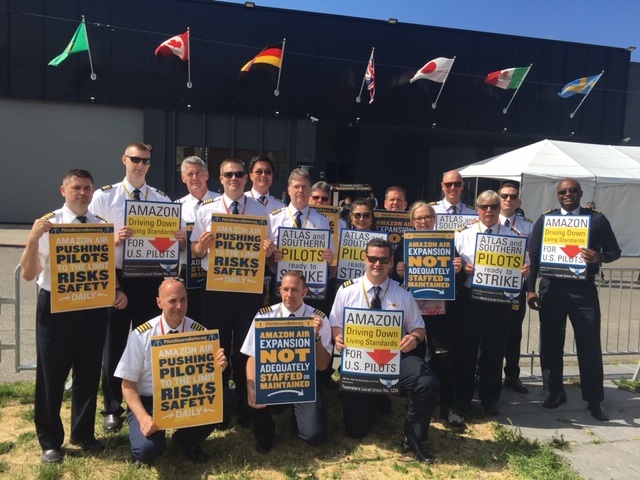 The dispute between Atlas Air and unions representing its pilots over a new collective bargaining agreement has been rumbling on for the last few years but this week has seen a series of claims and counterclaims.

Earlier this week, Atlas posted a ‘fact checker’ on its website in which it states it is “eager” to reach an agreement with pilots and disputes the claims made by the unions.

The unions have since responded to the Atlas fact checker, disputing some of the facts contained within the fact checker.

Some of the claims Atlas responds to in its fact checker are: Safety is being compromised, pilots are being overworked, Atlas cannot keep up with customer demand, the company does not want to increase pilot pay, that is does not want to reach an agreement and that customers control the operation.

In response to the safety claims, Atlas said that it is committed to safety and that there are legal and contractual obligations to adhere to rigorous safety standards.

On pilots burning out, it said that they fly according to the rules established within the existing agreement and that pilots fly an average of 42 hours a month compared with an industry average of 53 hours per month.

With regards to not being able to meet customer demand, the aircraft operator said its on-time flight performance meets or exceeds customer expectations.

It also added that pilots receive annual pay roses of approximately 3% and that customers play no role in governing operations or setting work rules.

The Teamsters union were not impressed with the Atlas fact checker and questioned several of the facts presented within it.

The union said it was a “steward for speaking the truth about the issues at the airline”.

“We are very disappointed by the company’s statements challenging the accuracy of the facts that we have brought to the public’s attention.

“Claims by Atlas that its operations are not significantly stressed because of its inability to attract and retain pilots are simply not true.

“Atlas’s fuzzy math using numbers from well before our staffing crisis began do not change the facts, and its efforts to manipulate numbers is only a lame attempt to hide what the public is now coming to understand is a significant problem: Atlas’s staffing crisis is negatively affecting its and its customers’ current and future operations and business and is putting our pilots’ safety at risk.

“We stand by the facts we have brought to light and invite Atlas and its customers to engage in an open exchange and discussion regarding the pilot staffing crisis, the effect of the crisis on their businesses, and solutions to resolve the crisis.”

The dispute over facts comes shortly after unions continued their tactic of protesting at meetings held by one of the aircraft operator’s most high profile customers – online retailer Amazon.