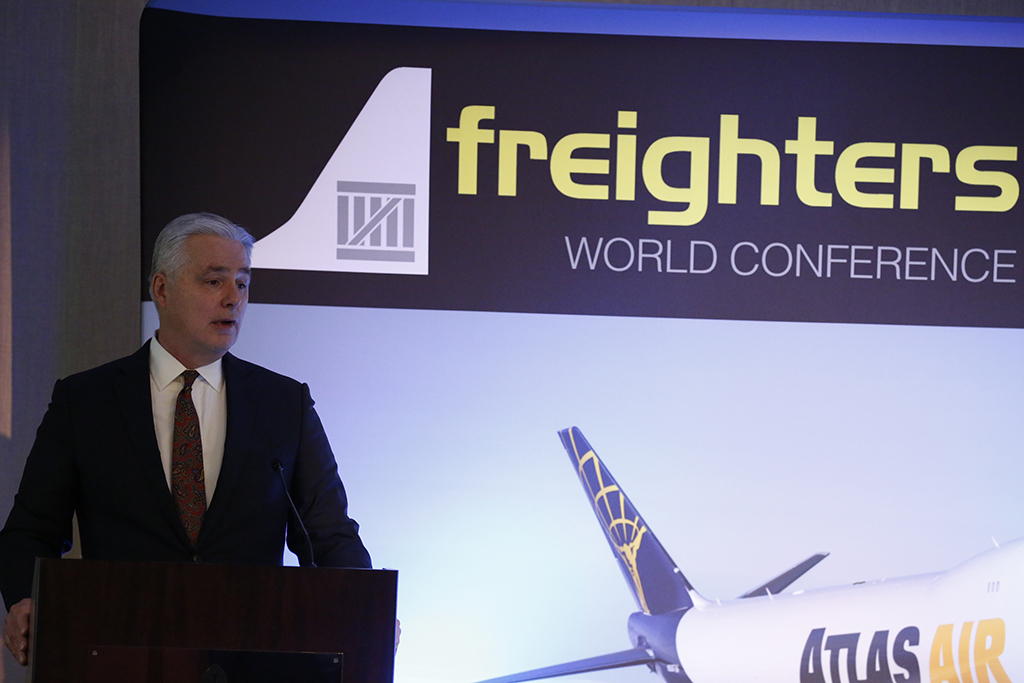 Atlas Air Worldwide (AAWW) is expecting to see constraints on the supply of freighters over the coming years due to limited supply of aircraft and demand increases.
Speaking at the Freighters World conference, AAWW president and chief executive William Flynn said the “supply of airframes is somewhat constrained”, although he added this will not be a “forever thing”.
He explained that on the widebody freighter front, dominated by Boeing 747s and B777s, there were just 13 B747Fs in storage under the age of 20 years.
Meanwhile, supply of new widebody freighters is limited. He pointed out that production of the B747-8F has been reduced by Boeing to just six aircraft a year due to a lack of demand and B777Fs need to fight for their place on the production line with the passenger version of the aircraft.
AAWW’s figures show that the widebody freighter fleet is expected to grow just 1% annually over the coming years. In total, the widebody fleet will number 405 aircraft in 2021, compared with 393 this year.
Flynn also questioned what would happen on the narrowbody market when the market has worked through B767 conversions.
He said that Airbus A330-300s conversions could act as a replacement, but added that it was not clear when those frames would become economically viable.
B737-800s could also cater for regional growth, but others at the event also questioned when these would become economically viable for conversion.
Flynn is also expecting freighters to maintain their marketshare against belly capacity.
“Not so long ago it was thought that freighters were going to be fundamentally displaced by belly capacity, particularly as new aircraft came into the market – like B787s and the A350s, which have substantial belly capacity.
“But we don’t think so. We think that the balance of about half of the products moving in freighters and half moving in belly is probably going to be the case going forward for some time.
“For Asia-North America about 80% of what moves, moves in freighters. On Asia-Europe about 75% moves in freighters.”
Meanwhile, demand growth of around 3.6% per year is expected over the coming three years, fueled by e-commerce and growing Asian economies.
He pointed out that the global express market had grown by 5.8% at a compound annual growth rate since 2011 and this is expected to accelerate over the coming years.
Meanwhile, the global e-commerce market had grown by 22.3% since 2015. PMI Index and semi-conductor sales figures, leading indicators for air cargo growth, point to continuing strong performance in air cargo demand.
There is further upside potential in the e-commerce market, he explained, as it accounts for just 10% of global retail sales.
Looking at individual markets, Asia is expected to continue to lead growth, fueled by a growing middle class, while freighter supply covering the market is limited.
The Asia-North America trade lane is expected to grow by 4.6% annually between 2016 and 2035 and remain the largest trade. Europe-Asia is expected to also increase by 4.6% per year over the same time period and remain the second largest trade.
Intra-Asia, meanwhile, is projected to increase by around 5.5% per year and become the third largest trade, overtaking both intra-North America and the transatlantic.
Flynn also used the opportunity to call on the industry to be more vocal when it comes to regulatory matters.
He said AAWW was itself opposed to the discussions surrounding the future of US open skies agreements led by United, American and Delta, which feel that Middle Eastern carriers are unfairly benefitting from state subsidies.
He said: “If you think about freight and express operations, without the fifth and seventh freedoms that open skies and bi-lateral air services agreements provide, it would be very difficult for us as an industry or individual companies to put together efficient economically viable networks to serve our customers.
“Our view on open skies, if there is a concern or any complaint about subsidies, is that there are other avenues to address subsidies.”
Flynn would also like to see long term FAA re-authorisation, instead of a short-term, as this made it difficult for the body to commit to capital project investments, such as air traffic control reforms.
“We, as the US aviation industry, believe that air traffic control needs to be reformed, needs to be modernised, needs to come out of the government and should be operated in a not for profit corporation, very similar to the Canadian model.
“There was a period of time when the FAA had 33 short authorisations. How do you commit to a capital project, or how do you commit to the tehcnology and suppliers that you are going to have the funds to pay them?
“We are operating what is fundamentally a 1960s air traffic control system in the US, based on ground radar. It is safe, but it is constrained.”
Flynn also expressed concerns about increases in the amount of flying time and the cost – estimated at around $500,000 – that is required to achieve a pilot’s license, which he said could further impact pilot supply.
Also, he said that even though the US government had withdrawn from the Paris Climate Accord, AAWW was still committed to the ICAO agreement and would begin purchasing carbon offsets over the next couple of years.
Read more freighter operator news