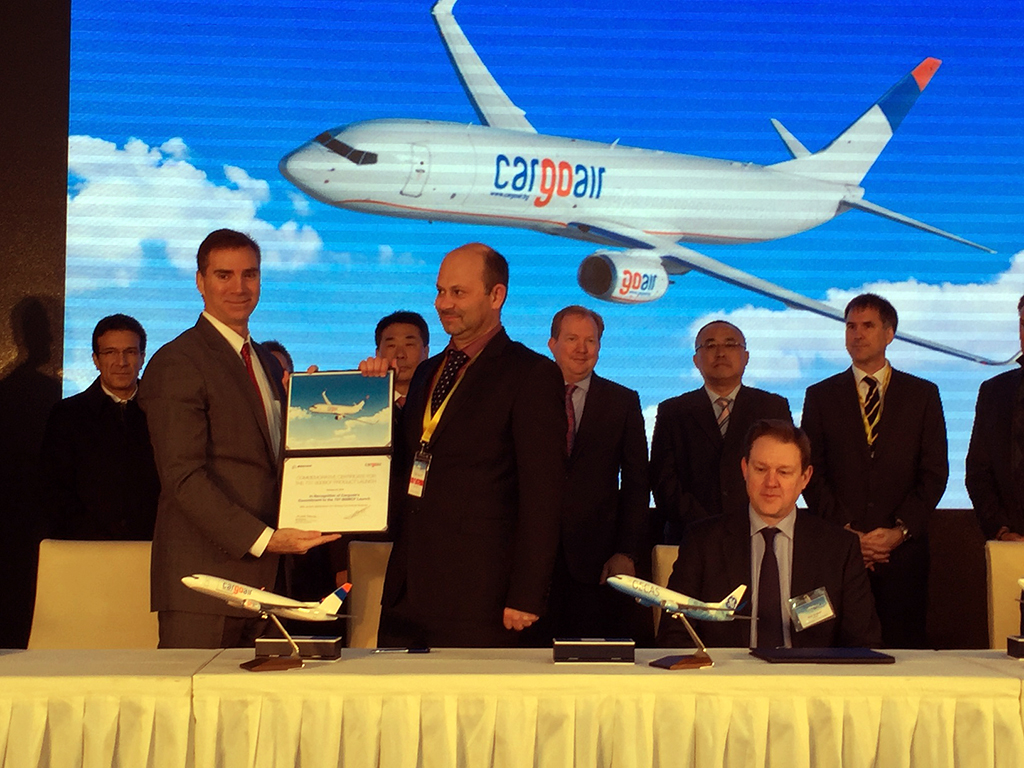 Boeing Commercial Airplanes has launched its new 737-800 Boeing Converted Freighter, the first 737NG (Next Generation) type that it has offered for conversion. Boeing expects the aircraft to primarily be used for the transport of express cargo on short-haul, domestic routes.
According to Boeing, the company has already received 30 orders and 25 commitments for the new passenger-to-freighter conversions (P2F) from seven customers: Hangzhou-based YTO Airlines (with orders for 10 aircraft), Beijing-based China Postal Airlines (10 orders), GE Capital Aviation (GECAS, with five orders), Shenzhen-based SF Airlines and Sofia-based Cargo Air as well as two other customers whose details Boeing hasn’t released.
The 737-800BCF can carry up to 23.9 tonnes of cargo and operate on routes of nearly 3,690 km. It boasts twelve pallet positions — sufficient for 11 standard pallets and one half-pallet — with 5,000 cubic feet (141.5 cu m) of cargo space on the freighter’s maindeck.
"The Next-Generation 737 provides exceptional value to express freight carriers through its superior payload, range, reliability and efficiency," remarked Stan Deal, senior vice president, commercial aviation services for Boeing Commercial Airplanes.
"While the recovery of the global cargo market has been slow, we see demand for freighters, such as the 737-800BCF, that will carry express cargo on domestic routes," he continued. "Over the next 20 years, Boeing forecasts customers will need more than 1,000 converted freighters the size of the 737, with China’s domestic air freight carriers accounting for nearly one-third of the total market."
The first 737-800BCF P2F is expected to be delivered in the fourth quarter of next year. Existing passenger 737-800s will be modified at facilities located near to the source of demand for the conversions, including Boeing Shanghai. Modifications will include installation of a large maindeck cargo door, a cargo-handling system and accommodation for up to four non-flying crew members or passengers.
Cargo Air, one of the carriers to have already placed on record its commitment for the aircraft, has quickly provided an explanation for its interest in the new model.
The Bulgarian wet-lease/ACMI (aircraft, crew, maintenance and insurance) freighter operator is committed to acquiring two 737-800BCFs. The first European customer for the 737NG P2F, Cargo Air currently operates a fleet of seven 737 Classic converted freighters on behalf of European express service providers, but believes that there are obvious advantages to the latest 737 P2F option.
“The 737-800 BCF will bring to our freighter fleet more advanced avionics, higher fuel efficiency and lower operating costs through its best-in-class maintenance programme and enhanced corrosion protection,” commented Angel Petrov, ground operations & commercial director for Cargo Air.
“Furthermore, the CFM56-7B engine on the Next-Generation 737 has high reliability and practically stays on wing forever, giving our airline significantly higher revenue potential through improved utilization, ensuring our continued success,” Petrov added.