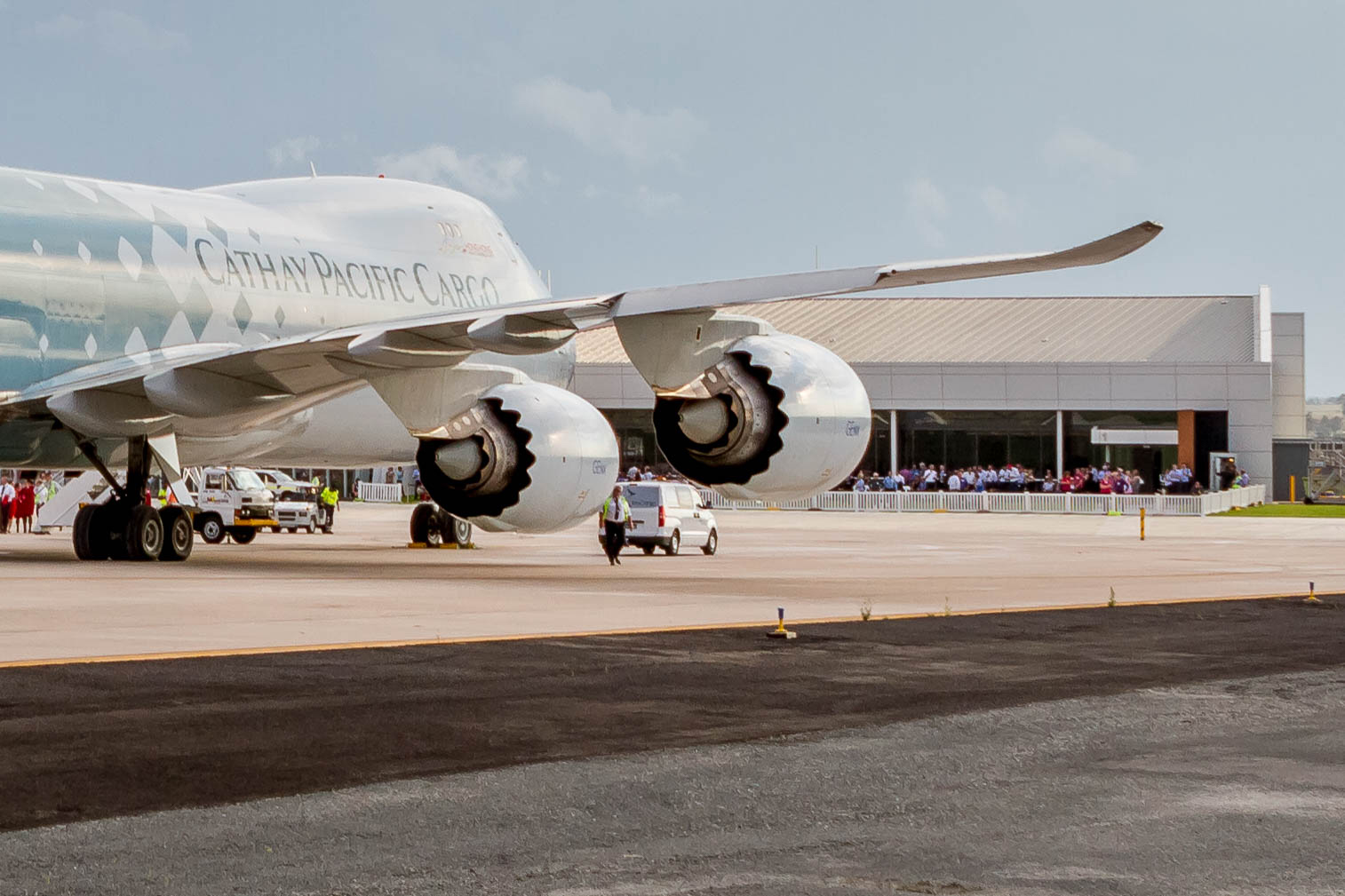 Cathay Pacific Airways is expanding its freighter services in the South West Pacific with the addition of a weekly scheduled service to Brisbane West Wellcamp Airport in southern Queensland, Australia.
It will become the first dedicated international freighter service to Wellcamp, and will operate on a Hong Kong–Sydney–Melbourne–Brisbane West Wellcamp–Hong Kong routing every Monday from November 21 2016, subject to government approval.
Hong Kong-based Cathay Pacific will deploy a Boeing 747-8F on the route, following a successful trial flight to Wellcamp airport last year (see picture).
The Boeing 747-8F aircraft offers more cargo space to carry the anticipated high volumes of fresh produce from one of Australia’s most productive agricultural regions as well as machineries needed to support mining projects and other manufacturing activities in the local and surrounding regions.
The service will meet growing demand to move a wide range of commodities from southern Queensland and its catchment area to key markets in Asia, Europe and North America, providing shippers with greater choice and flexibility when connecting to Cathay Pacific’s international cargo network through the Hong Kong hub.
Cathay Pacific Director Cargo Simon Large said: “Cathay Pacific is always looking for opportunities to grow our freighter business, and at the same time boost Hong Kong’s standing as one of the world’s key international airfreight hubs.
“With our successful Boeing 747-8F trial flight into Brisbane West Wellcamp last year, followed by strong support from the community of southern Queensland, we are excited to introduce this new service to support shippers in the region.
"With growing demand from Mainland China for Australia’s agricultural products, we are confident our service will provide local businesses with a competitive advantage as the benefits of the new China-Australia Free Trade Agreement increase.”
Owners and developers of Brisbane West Wellcamp Airport and Wellcamp Business Park are Wagners, an Australian family-owned infrastructure, construction and materials company with interests across the globe.
Wellcamp, which opened in November 2014, is Australia’s first privately-built public airport. In addition to its upcoming freight operations, it also has 72 domestic regular passenger transport services in and out of the airport every week.
Wagners’ global chairman and airport developer, John Wagner, welcomed the news, which he described as “a major coup” for not only the airport but for Queensland’s primary producers and exporters.
“We are absolutely delighted Cathay Pacific has committed to operating a scheduled weekly Boeing 747-8F service out of the airport. The opportunities this creates for Queensland exporters to benefit from Australia’s free trade agreements and to access the world’s biggest consumer markets are unlimited.
“We are on the cusp of very exciting times and the reality for our multi-million-dollar agricultural and processing sectors is produce like chilled beef and other perishables will be able to fly direct to Asia from the region in which they are produced, creating both valuable first mile and cool chain efficiencies, and enabling significant capacity for the growth of trade.”
Menzies Aviation, in partnership with Brisbane West Wellcamp Airport, will manage the ground handling and cargo terminal operations.