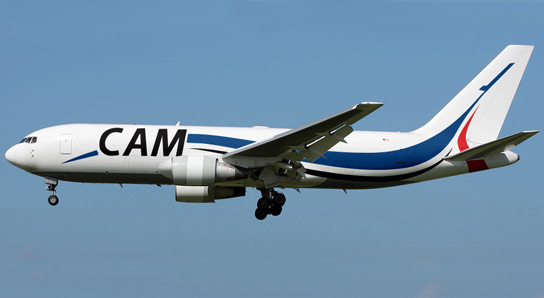 Cargo Aircraft Management (CAM) has completed a new six-year lease of a B767-300 freighter to Cargojet of Canada.
CAM, an Air Transport Services Group (ATSG) subsidiary, said that the freighter is in addition to four other B767Fs  leased to Cargojet, including two aircraft added in 2014.
Together with agreements with DHL for the lease of two more B767 freighters starting next month, CAM expects to have 27 of its 45 B767 freighters under lease to third parties by the end of March 2015.
The remaining aircraft are leased to CAM’s airline affiliates to operate on behalf of other customers.
Joe Hete, president and chief executive of ATSG, said that he is confident about ATSG’s outlook for 2015, based on recent freighter leases with Cargojet, DHL, and Amerijet, plus the extension of the company’s air network services agreement with DHL through to March 2019,
Hete also cited “improving trends” in its ACMI business that included a new service between Hawaii and the US mainland in the fourth quarter of 2014.
He added: “We ended 2014 on a strong positive trend, and we expect to report solid gains for the year in both earnings and cash flow, excluding non-cash charges. We anticipate that our 2014 Adjusted EBITDA from continuing operations will be approximately $178m.”
ATSG will add further detail to its outlook for 2015 when its report 2014 fourth-quarter and full-year results in early March 5.
Did you find this article of interest, if so why not register for a FREE digital subscription to Air Cargo News? – Find out more