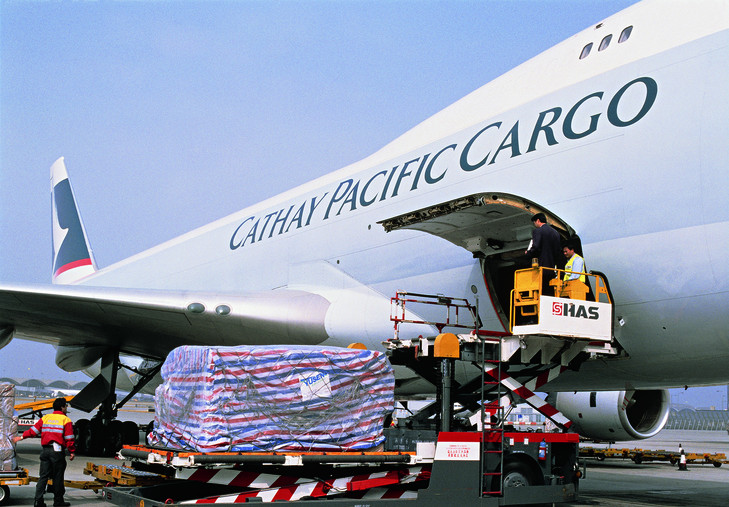 Cathay Pacific’s group cargo revenue fell 9% in full year 2015 to HK$23.1bn, reflecting a reduction in fuel surcharges due to lower fuel prices.
The Hong Kong-based combination carrier said: “Air cargo demand, which came under pressure during the second quarter of the year, remained weak in the second half.”
Cargo capacity for Cathay Pacific and sister-airline Dragonair increased by 5.4% in 2015 while the load factor decreased by 0.1 percentage points to 64.2%.
“Strong competition, overcapacity, unfavourable foreign currency movements and the reduction in fuel surcharges put pressure on yield, which decreased by 13.2% to HK$1.90,” said the carrier in releasing its full year 2015 financial results.
It continued on cargo: “Demand was strong in the first quarter of 2015, assisted by industrial action at ports on the west coast of the US. Overall demand was weak for the rest of the year, particularly on European routes.”
It added: “Our cargo business has many challenges. We have confidence in its long-term prospects and in Hong Kong’s future as an international air cargo centre.”
Including its passenger and other services, the Cathay Pacific Group reported an attributable profit of HK$6bn for 2015, nearly double the equivalent figure in 2014. Earnings per share were HK152.5 cents compared to HK80.1 cents in the previous year.
Cathay Pacific Chairman John Slosar said: “The operating environment was better in 2015 than in 2014, but we faced some significant challenges, which we expect to continue in 2016," adding: “Cargo demand will be adversely affected by industry overcapacity.”
In 2013, Cathay Pacific agreed to sell six Boeing 747-400F freighters to Boeing. Two of these freighters have been delivered and the remaining four will have gone by the end of 2016. The carrier will take delivery of its 14th and final B747-8F freighter later in 2016.
The airline summarised it airfreight performance, saying that cargo profits in 2015 were affected by low fuel prices. It added: “Low fuel prices meant lower fuel surcharges. This adversely affected revenue and yield. Low fuel prices also meant more market capacity. This also adversely affected yield. So did the depreciation of some currencies.
“We managed capacity in line with demand. We reduced schedules and made ad hoc cancellations where necessary.”
Cathay carried a higher proportion (57.0%) of total cargo shipments in the bellies of passenger aircraft. It said that demand for cargo shipments from Hong Kong was strong in the first quarter of 2015 but “weak” from then until the year end peak period.
There was “no growth in demand” for shipments to Europe in 2015. Demand for shipments to North America was better than expected and strong on Indian routes.
“Exports of cargo from Shanghai, Chengdu, Chongqing and Zhengzhou, particularly shipments of consumer electronic products to North America, are key sources of cargo revenue.
“The 2015 revenue from these sources in Hong Kong dollars was adversely affected by the weakness of the Renminbi. Our mail business in mainland China is growing.”
Overcapacity on routes to Europe put “heavy downward pressure” on yield and Cathay “concentrated on shipping pharmaceutical and special products from Europe".
Last year (2015) was the second full year of operations for the Cathay Pacific cargo terminal at Hong Kong International Airport, which handled 1.7m tonnes, an increase of 13% compared to 2014.