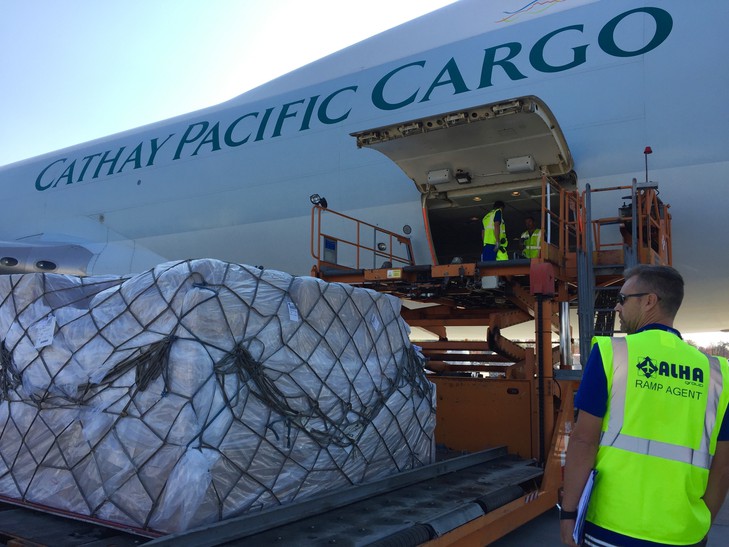 Cathay Pacific Cargo is expecting a strong start to 2018, with demand remaining strong for at least the first quarter, shippers already looking to secure space and rates expected to rise.
In a series of outlook articles, executives from the airline outlined the strength of the air cargo market in 2017 also their expectations for the coming 12 months.
Regional manager cargo, Europe, Ray Jewell, said that bookings for January had come in earlier than usual and added that forwarders may look to secure capacity over longer periods.
“The feeling is that cargo will continue to be strong well into the first quarter of the year,” he said.
“It’s early December and we are already taking bookings for January. That lead times are lengthening, not across the board but at all, is a pretty encouraging indicator because people are struggling to find capacity.
“Customers have told us that they have warned shippers that there will be increases in rates.
“We hope it will last the whole year, and if it does it might change how people manage their capacity requirements.
“We may see agents willing to buy capacity for a longer time at a higher rate because they want to protect their business.”
Kenneth Tsui, manager cargo, China, agreed with Jewel, saying that shippers were working with airlines and agents to protect space for their exports.
“This is an indication that they have concerns about capacity when getting their products to market,” he said.
“Our challenge, and other carriers operating out of China and Hong Kong, is that we have to strike a balance between capacity and demand and keep a sustainable operation.”
Jeanette Mao, head of cargo global accounts and marketing, said that the airline’s freighters had been flying with a utilisation rate of around 97% over the first ten months of this year because of the demand growth registered.
She said growth was fuelled by improving global economic confidence, e-commerce demand, retail confidence and shorter product cycles.
“[Shorter product cycles] means more frequent product launches and the need to build up inventory in shops quickly.
“In addition, the reliability of seafreight has been under pressure due to port congestion, a decline in on-time performance and the introduction of new alliance networks.
“This is a big risk for manufacturers reliant on just-in-time stocking, and that has seen automotive shipments and machinery parts airfreight grow by 18% and 14% respectively in the first eight months of the year.”
Tsui added that the strength of the US dollar was also boosting China’s trade with the US.
The airline’s latest cargo statistics show that demand over the first 11 months of the year has increased by 11% year on year to 1.9bn kgs. Its cargo load factor for the month stood at 71.6% compared with 68.1% last year.
Read more freighter operator news