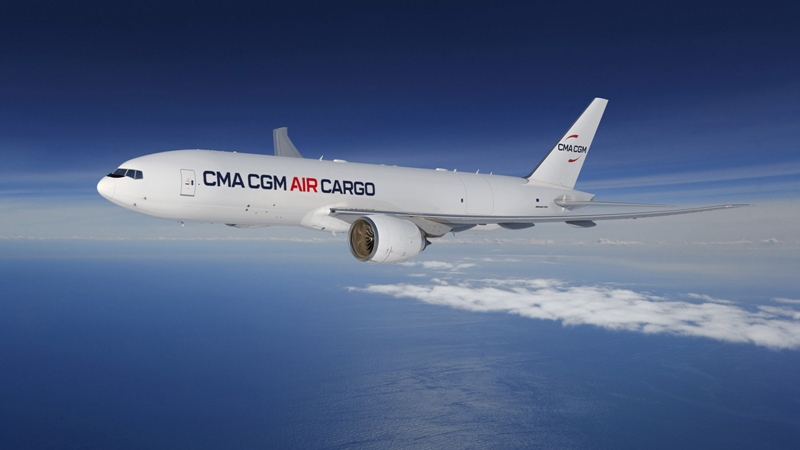 CMA CGM Air Cargo has added its second Boeing B777F in the space of two weeks and disclosed its plan to operate a fleet of at least 12 freighters by 2026.

The fast-growing carrier took delivery of its second B777F yesterday at a ceremony held at Boeing base in Everett, Washington State.

At the event the carrier also confirmed that it had placed an order for an additional two B777Fs with the airframer. The aircraft are due to be delivered by 2024.

CMA CGM said that when delivered, the new aircraft will complete a fleet of at least 12 Boeing and Airbus aircraft by 2026.

The carrier’s fleet currently stands at: two B777Fs and four Airbus A320Fs. It has also placed an order for four A350Fs.

The delivery of the second B777F comes just days after the first of the model was added to the carrier’s fleet on May 31. The orders were placed in spring 2021.

Olivier Casanova, chief executive of CMA CGM Air Cargo, said: “The reception of our first two Boeing 777 Freighters, and this new order of two additional aircraft represents a milestone in our fleet expansion.

“With four Boeing 777 Freighters by 2024, complementing our existing fleet of four aircraft, CMA CGM Air Cargo will enlarge its network, linking Europe, Asia and America and provide a tailor-made range of transportation and logistics solutions to our clients, thanks to a modern, technically and environmentally efficient fleet.”

As well as creating its own airline and purchasing freight forwarder CEVA, the company has also announced a far reaching partnership with Air France KLM Martinair Cargo.

The two companies signed a 10-year exclusive partnership that will see them combine their current fleets of 12 full-freighter aircraft as well as the 10 freighters they have on order.

CMA CGM is also planning to purchase a 9% stake in Air France-KLM Group as part of the deal.