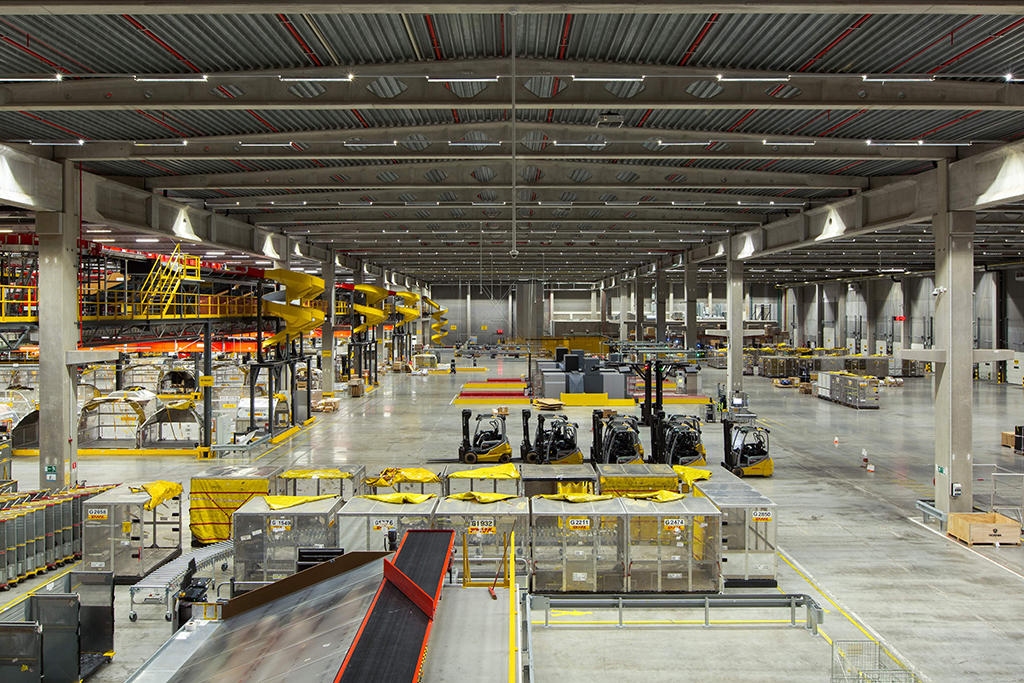 DHL Express has officially opened its new regional hub at Brussels Airport, almost quadrupling the integrator’s handling capacity at the European gateway.
An investment of over €140m, including lease expenses, has seen approximately 200 additional DHL jobs created at the airport, three years earlier than planned.
DHL Express chief executive Ken Allen said: “Brussels plays a crucial role in the worldwide DHL Express network.
“Brussels Hub is one of our largest hubs in the world and because of its location in the logistics heart of Europe, it also plays an important role in connecting companies from this region with the world.
“This new hub is a key part of our worldwide investment plan and will support our growth, the efficiency of our network and the high level of quality for which customers turn to DHL Express."
The 36,500 sq m hub includes associated warehousing and office space. When operating at full capacity, the two automated sorting systems can process up to 42,000 packages per hour, making it the fifth-largest hub in the global DHL network.
It benefits from air and ground links to a wide range of European destinations, as well as direct intercontinental air connections to the Americas, Middle East and Africa.
Vice president of DHL Brussels Hub, Koen Gouweloose, remarked: “This new hub is a great example of some of the latest state-of-the-art logistics technology.
“It allows us to process even more packages even more quickly and efficiently. As a hub, this allows us to play an important role in the network, while paying close attention to security and working conditions for our 1,200 employees, who are in turn ensuring that our clients are receiving the great service they expect from DHL Express.”
Managing director of DHL Express Belgium and Luxembourg Danny Van Himste added: “We can help Belgium be even better connected to Europe and the world.
“We are addressing the needs of customers of all sizes and from all industry sectors in the Belgian market. With the hub giving us extra capacity, speed and flexibility, national borders should be no barrier to our customers.”
In keeping with DHL’s GoGreen programme, the hub has reduced the company’s ecological footprint by 768 tons of carbon dioxide per year, thanks to more efficient sorting techniques and better insulation.
The hub is also certified to the Transported Asset Protection Association (TAPA) ‘A’ security standards.
The new site is a welcome expansion in capacity, given that DHL said that its Brussels operation is now busier than ever, despite its ‘demotion’ ten years ago to a regional centre when DHL moved its primary international hub to Leipzig (a move which Ken Allen described as “a dreadful experience”).
The hub handles 42 direct flights a day. It has air and ground links to a various European destinations, as well as direct intercontinental connections to  Cincinnati, Bahrain and Lagos.
Allen predicted a bright future for the new hub, saying: “This is the best time for business for 15 years.
“Traditional B2B [business to business trade] is bouncing back and is now growing by up to 13%, but there is also the e-commerce revolution.”
Belgium offers an exceptional environment for international business, particularly smaller firms who could, though the Internet, start trading globally almost instantaneously.
The hub also features sophisticated security equipment based on the same technology used in medical magnetic resonance imaging (MRI) scanners which can simultaneously scan and X-ray around 96% of all consignments without further intervention.
Gouweloose said that, with the original 1985-vintage hub reaching full capacity, the express operator had considered a number of options, including enlarging the existing facility.
“However, with growing numbers of truck movements, the existing hub’s location on the passenger side of the airport, separated from the main cargo area, was not ideal.
“We were lucky to get a greenfield site on the cargo side of the airport,” he explained.
Gouweloose added that there are many European distribution centres in the Brussels region and the new facility’s offload-to-reload time of only five minutes will help facilitate the fast delivery times that today’s customers demand.
Having multiple, high capacity hubs with automated routeing also gives the DHL network more resilience in the event of bad weather, he said.
During the recent Paris snowstorms, DHL managed to maintain a high proportion of on-time deliveries.
At the opening of the new hub, Allen revealed – speaking in French – that he had taken out Belgian citizenship.
Later, in a conversation with Air Cargo News, he said the move was made to forestall any difficulties caused by the UK’s exit from the EU in just over a year’s time.
Allen, who said he voted to ‘Remain’ in the UK’s referendum on continued membership of the EU noted: “Clearly, I hope that Brexit would not cause me problems, but it’s a precaution.”
He did not reveal whether he would also retain his UK citizenship, saying only that he had not yet “activated” his Belgian one.
Allen added that he believed that there would be many other senior managers of international companies that had either taken or were contemplating taking a similar step.