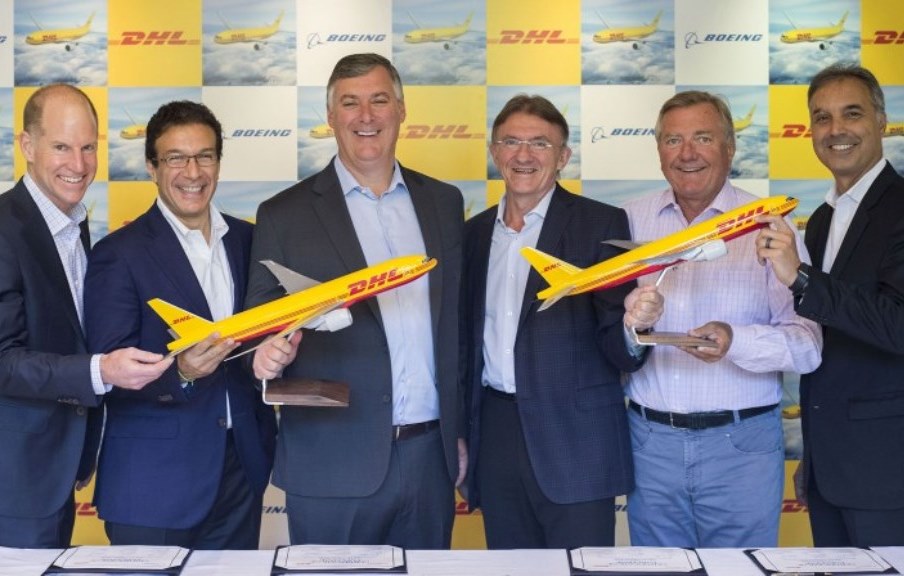 DHL has placed an order for 14 Boeing 777 Freighters with purchase rights for seven additional freighters valued at $4.7bn based on current list prices.
The order, which will double the size of DHL’s B777 fleet, was unveiled at the opening of the 2018 Farnborough International Airshow.
The order is in response to rapidly growing express volumes and will be used to replace ageing aircraft, the companies said.
Ken Allen, chief executive, DHL Express, said: “The acquisition of the 14 Boeing airplanes reflects a gradual replacement of our older intercontinental fleet.
"As the most fuel-efficient, most reliable freighter type with the best long-haul range, these aircraft will contribute to our emissions reduction targets and allow us to serve even more markets with non-stop flights.
"DHL was an early adopter of this type of aircraft for the logistics industry and took delivery of the 3rd B777F produced by Boeing in 2009. With extensive experience operating this freighter type, it has proven to be superior in all aspects of operation making it a logical choice."
The 14 aircraft are capacity neutral, but operational wise offer "significant cost, efficiency and reliability benefits", DHL said.
DHL Express has in the past chiefly leased aircraft to operate its global network on the routes.
"The purchase of fully owned freighter aircraft will improve the cost position of the DHL Express division going forward," it said.
For 2018, pre-payments have already been included in the group Capex guidance.
"We are delighted to announce the acquisition of 14 new 777 Freighters as we renew part of our long-haul fleet with this best-in-class fuel efficient freighter type that will make a significant step towards DHL’s zero emissions target by 2050," added Charlie Dobbie, executive president of global network operations & aviation.
"The 777 Freighter is an airplane perfectly suited to DHL’s needs, offering an outstanding payload capability, with incredible range to service its extensive intercontinental network and unmatched reliability," said Boeing Commercial Airplanes president chief executive Kevin McAllister.
The order comes as global airfreight demand grew by nearly 10% last year, with demand growth outpacing capacity growth by a factor of three.
And expanding cross-border e-commerce sales are expected to grow to $4.5trn by 2021, which means a growth of 19.2% per year. DHL’s investment in the B777F is a direct answer to the growing demand for global express capacity.
As the largest twin-engine cargo airplane in the world, the B777F is capable of flying 4,900 nautical miles (9,070km) with a cargo load of 102 tons.
The B777Fs will reduce CO2 emissions by 18% versus the aircraft being replaced.
The DHL order continues a boom for the B777F in 2018, with FedEx ordering 12 B777Fs in June, Qatar Airways signing a letter of intent for five aircraft, an order worth $1.7bn at list prices, while Lufthansa Cargo has ordered two more of the 103 tonne capacity long-range jet.
Turkish Airlines kicked off the year with a confirmed order for three B777Fs, to be delivered this year, on top of the two it already operates, while Japan’s All Nippon Airways (ANA) is acquiring two B777 freighters — for delivery in 2019 — in response to the “expanding market in Asia, China, and North America”.
The secondary market saw US-based aircraft lessor Atlas Air acquire two B777-200 freighters in March from LATAM Airlines, South America’s biggest cargo airline. Both aircraft will operate in aircraft, crew, maintenance and insurance (ACMI) service for DHL Express through Atlas’ Southern Air subsidiary.
In February this year, FedEx rival operator UPS  ordered an additional 14 Boeing B747-8F cargo jets and four new Boeing 767F aircraft to provide additional capacity in response to demand growth.
Read more freighter operator news
Sign up to receive Air Cargo News direct to your inbox for free