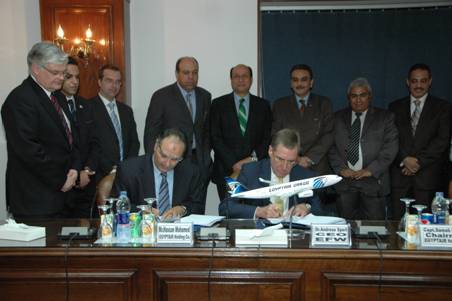 Airbus subsidiary EFW has signed a launch contract for its A330-200P2F passenger to freighter conversion programme with Egyptair Cargo.
The deal comprises the conversion of two passenger aircraft currently owned and operated by Egyptair, plus two further options.
The conversion of the first two A330-200s from passenger-to-freighter configuration comes as Egypt’s flag carrier looks to modernise its cargo business operations, with fuel efficiency a “major goal” in awarding the contract.
“This agreement marks the continuity of a long term relationship between both companies” says EFW’s chief executive Andreas Sperl.
Dr Sperl added that Egyptair has operated Airbus freighters for many years, starting with inauguration of the first generation converted Airbus A300B4 in 1998, followed by the second generation A300-600P2F in 2005.
“With Egyptair as launch customer we have made a very important step for this long term A330P2F programme,” he continued.
The two A330-200 aircraft will replace Egyptair’s ageing A300B4 freighters, says EFW, “offering one third additional payload, with substantially improved range capabilities and significantly reduced carbon dioxide emissions coupled with extensively improved noise footprints”.
Capt Basem, chairman of Egyptair Cargo, says: “The new modern fleet of A330 converted freighters will complement our investments into new cargo facilities in Cairo.
“We plan to form Cairo into a strong cargo hub and we are convinced that the agreement will provide the baseline for our future airline success.”
EFW launched the A330-300/200P2F conversion programme early 2013 in a joint venture setup together with Airbus and ST Aerospace of Singapore.
EFW added: “The major development milestones have been successfully met and final design freeze will very soon be achieved. The conversion activities at EFW’s Dresden facility will start with the larger A330-300 which will see entry into service (EIS) in 2017.
“The A330-200 family member will follow shortly thereafter with an expected EIS mid-2018.”
EFW has converted more than 190 Airbus widebody aircraft. Currently, EFW is under contract to convert A300-600’s in advance of the first A330 being inducted.
In parallel to its cargo conversion business, EFW has extended its maintenance, repair and overhaul (MRO) activities during the last years, now offering a full range of service support for all Airbus aircraft types.

Did you find this article of interest, if so why not register for a FREE digital subscription to Air Cargo News? – Find out more
Life Sciences and Pharmaceuticals Conference 2014, to be held in London during December. To register and find out more…