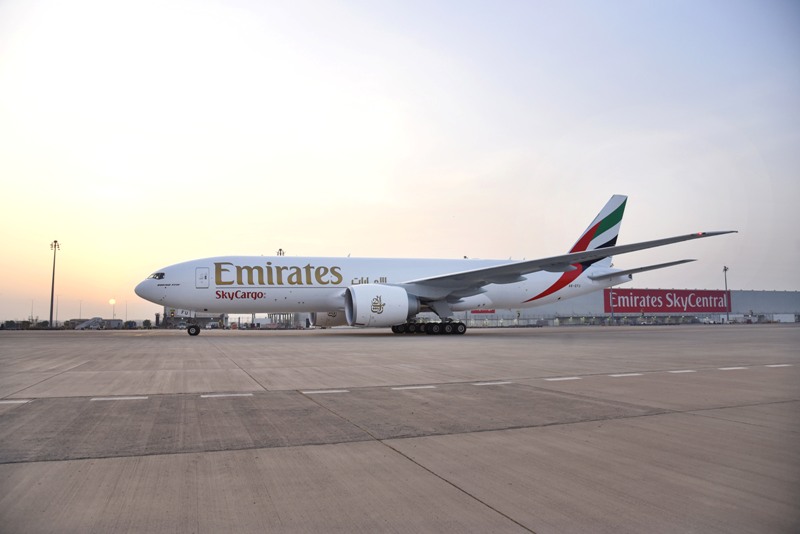 Emirates SkyCargo has taken delivery of its latest Boeing 777F, revealed plans to add new services to China and confirmed that it will convert more aircraft.

The brand new freighter, A6-EFU, will replace A6-EFG which went back to its lessor last week, maintaining the carrier’s B777F fleet at 11 aircraft.

The freighter is the second B777F delivered to the carrier this year as part of a $1bn order for new freighters announced in November last year.

The carrier has also ramped up its conversion plans this year with the addition of six more B777 aircraft to be re-configured, in addition to the four previously announced.

The additional conversions were announced in mid-June at the Air Cargo India event.

The ten conversions will boost the carrier’s total cargo fleet to 21 aircraft by the end of 2026.

Meanwhile, the carrier also revealed plans to ramp up flights to Asia and Africa, with additions to China in the coming days.

Emirates SkyCargo will now serve China with an additional four freighter flights every week – from this week, Shanghai will be served with six direct flights, Beijing with two and Guangzhou with four, adding more than 400 tonnes of cargo to and from China.

The additional China flights come as the country continues to open up following Covid shutdowns and restrictions.

There are also plans to increase frequencies to Hanoi and Sydney with direct services.

And additional frequencies to Nairobi are also earmarked to be part of a freighter multi-stop route from Dubai World Central (DWC) to Eldoret International Airport in Kenya.

“The flight then hops to Nairobi before heading north to Maastricht, Netherlands and then to Zaragoza, Spain before the 777F returns home to DWC,” Emirates SkyCargo said. “At each stop, the freighter unloads and reloads with various types of cargo including, flowers, textiles and pharma.”

The carrier said the additional conversions and services come as it has seen a “significant increase” in cargo loads across its products, including pharma and fresh produce.

“Despite the challenging headwinds this year, the air cargo industry is booming and we’ve been flat out since the pandemic began.

“Emirates SkyCargo will continue its journey as one of the world’s largest and best air cargo airlines by investing in our fleet, our global network, technology, and world-class logistics infrastructure at our Dubai hub and beyond.”