Ex-Jade B747 freighter preparing for duty with CAL A Boeing 747-400ERF once operated by German-Chinese carrier Jade Cargo is on course to be operated by Liege airport-based CAL Cargo Airlines, which is headquartered in Israel and owned by entrepreneur Offer Gilboa.
Meanwhile,  ACE Belgium Freighters (ACE) is taxiing for take-off with its first service, scheduled to begin in October this year with a B747-400 freighter.
ACE, operating out of Liege and headed by Eshel Heffetz, is a separate Belgium-based company, also controlled by Gilboa.
The ex-Jade jet – bought via China’s Taobao online auction platform – is undergoing maintenance work before joining CAL’s three B747-400 freighters, one of which is also an ex-Jade aircraft.
Soon after, it is likely that one of the existing CAL freighters, a B747-412BCF, will then switch from the Israeli to the Belgian register, becoming the first aircraft for ACE.
It sounds complicated, but a Belgian Air Operator Certificate (AOC) provides greater access to freighter routes across North African and Middle East airspace which would be denied an Israeli operator.
Heffetz, a 30-year aviation industry veteran, has worked with Gilboa since the early 2000s.
ACE currently has a foreign air carrier permit and exemption authority submission with the US Department of Transportation, in parallel with the Belgian AOC application, which needs to be approved first.
Said Heffetz: “The bilateral agreement between Europe and the US is open sky. Based on those rights, and according to the advice that I’m getting, the application should go through.”
The US paperwork concerns operations from Liege to New York (JFK), Atlanta, Dallas Fort Worth and Chicago, but Heffetz says that the carrier is looking at “several options” in order to optimise the group’s activities.
“CAL is already operating to New York and Atlanta, and we looking to increase the weekly rotation a little bit through the US. We are examining the financial structure, maybe with one freighter in the beginning.”
ACE is also looking at the potential for services to Africa and China but limitations imposed on new operators by the Chinese regulators mean that management in Liege will have to decide on the right time to start flights.
A Belgian AOC would allow for economically viable flights to Africa compared with an Israeli registered freighter which would encounter airspace flying rights in some North African airspace.
Heffetz stresses the management approach, with CAL and ACE working together from a commercial viewpoint: “If there is more demand at JFK, then it would be more difficult for CAL, with the number of aircraft it operates.
“So we ACE could fly twice a week to support CAL’s activity. We have not yet finalised the optimisation for individual sectors.”
Asked about the group’s ambitions for CAL, Heffetz said: “Our plan at ACE is to add another aircraft next year, at which point we will examine our performance.
“If ACE does achieve what we plan to achieve with a one aircraft operation, then we will change the scope of the business plan.
“Right now ACE plans to be flexible if there are delays for whatever reasons, be it with the [regulatory] authorities, from crew management or some other factor.
“It is quite complicated to create the set-up for obtaining an AOC. Once it is working, we plan to add another freighter, and then we will do some new thinking.”
On the second aircraft type, Heffetz said that it could be a converted B747-400 aircraft but is more likely to be a B747-400 production freighter.
CAL’s motto is “Challenge accepted”, referring to non-standard cargo, and Heffetz said that ACE will similarly take on this business culture, “working together as customer-friendly group”. 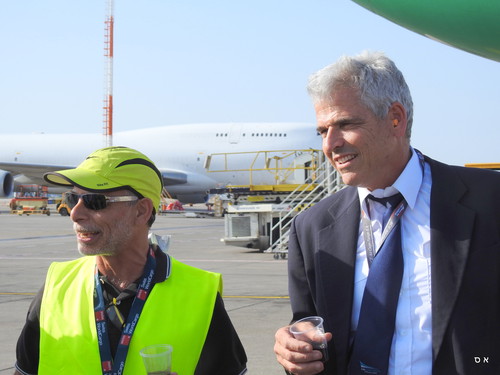 L-R: Offer Gilboa and Eshel Heffetz after the ex-Jade freighter touched down
Read more freighter operator news
Sign up to receive Air Cargo News direct to your inbox for free