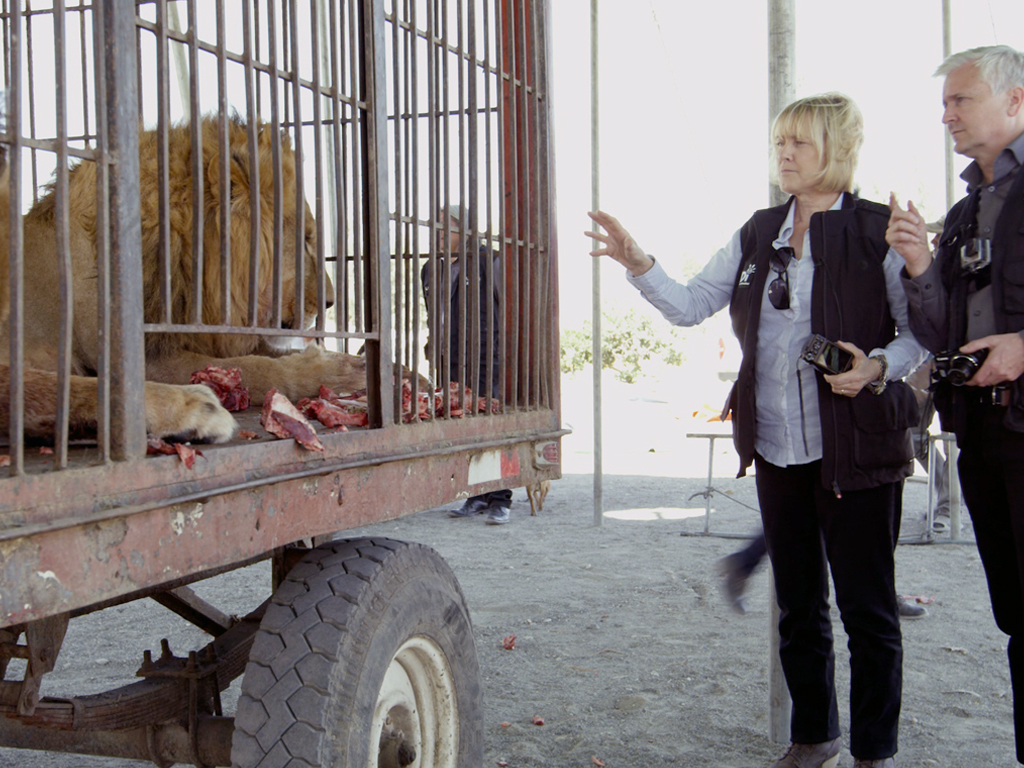 A total of 33 lions rescued from circuses in Peru and Colombia are due to fly to a new life in South Africa on 29 April on a chartered MD11F freighter. The animals, 24 from Peru and nine from Colombia, have been rescued by international campaigning group, Animal Defenders International are heading back to their homeland after both countries banned the use of wild animals in circuses.
They are heading for the Emoya Big Cat Sanctuary, which offers a natural bush environment; some of the animals are too badly injured to survive in total wilderness.
An online campaign by ADI and GreaterGood.com has raised half the airfare and it is hoped to generate the remainder in the next week. http://greatergood.me/1XLsPN3
Over 100 animals have been rescued by Animal Defenders International and Peruvian officials enforcing the prohibition on wild animals and a crackdown on illegal wildlife trafficking.
Bears, monkeys, birds and other native wildlife have been relocated to sanctuaries in Peru, a tiger to Florida, and now, 33 lions are destined for Emoya Big Cat Sanctuary in South Africa.
TIMINGS TO BE CONFIRMED – PLEASE CONTACT ADI FOR DETAILS OF ACCESS:
April 29th 3am: Nine rescued lions loaded at Bogota Airport
5am: ADI Spirit of Freedom Flight departs Bogota
7.30am: Flight arrives in Lima
8.30am: 24 more lions loaded at Lima Airport
10.30am: ADI Spirit of Freedom Flight departs Lima
April 30th 9.30am: Spirit of Freedom lands at OR Tambo Airport, Johannesburg
Midday: Lion convoy leaves airport
4pm: Lions start being unloaded at Emoya Big Cat Sanctuary, VAALWATER, LIMPOPO
24 of the lions were rescued in surprise raids by ADI on circuses in Peru. They were living in deplorable conditions in cages on the backs of trucks. Nine were voluntarily surrendered by a circus in Colombia. Almost all of the rescued lions have been mutilated to remove their claws, one has lost an eye, another is almost blind, and many have smashed and broken teeth so would not survive in the wild.
At their new home at Emoya Big Cat Sanctuary, the lions will enjoy large natural enclosures situated in pristine African bush, complete with drinking pools, platforms and toys. The lion habitats will be steadily expanded over the coming months as the lions become familiar with their new life and are introduced to each other.
Jan Creamer ADI President: "These lions have endured hell on earth and now they are heading home to paradise. This is the world that nature intended these animals for. It is the perfect ending to ADI’s operation which has eliminated circus suffering in another country."
Savannah Heuser, founder of Emoya Big Cat Sanctuary, says: "The lions are returning to where they belong. This is their birth right. African sun, African night skies, African bush and sounds, clouds, summer thunderstorms, large enclosures in a natural setting where they can remember who they are."
Minunette Heuser adds: "The sad reality is that many rescued animals are simply replaced by the next litter of cubs, for the next money-making scheme, we love being part of this rescue that ends the abuse. Knowing that ADI has changed laws means that these lions are the last to be exploited in this way in Peru."
Noah Horton, GreaterGood.org Director of Operations, who have been running an online fundraising campaign for the flight: "GreaterGood.org and The Animal Rescue Site are proud to support Animal Defenders International’s efforts to transport these lions home to Africa. After years of abuse and neglect in illegal circuses in South America, we are thrilled that they will be able to enjoy a comfortable retirement at the Emoya Big Cat Sanctuary."
Marc Tohir, Priority Worldwide Services: "It is with great honor that PWS was chosen to play a pivotal role in supporting Animal Defenders International Spirit of Freedom flight. The flight will have 33 very special passengers. PWS mission and core values, include reducing the company’s impact on the environment and the wildlife inhabiting it, are unwavering and unique in our industry. ADI’s mission aligns with PWS’ corporate mandate against shipping dead trophy animals or live ones for human consumption or testing, animal products and hunting or laboratory equipment used to test or harm animals."
TV legend Bob Barker’s DJ & T Foundation helped kickstart the operation in Peru with a major donation that enabled ADI to start raiding circuses and removing animals.
Others stepped up to fund the $10,000 airfare of individual animals including Oakland Zoo, Dr. Lo Sprague & Rev. Dr. Gwynne Guibord, Elise Zoli, and the Facebook group ‘Lion Lovers.’
ADI and Emoya would like to thank the Peruvian Government departments, SERFOR and ATFFS, and Police and in Colombia CDMB, a regional wildlife authority in Bucaramanga for enabling this incredible operation to happen.
Businesses have also donated services and goods or discounted services to help get the lions home including Priority Worldwide Services, Spherical Logistics and Swissport International at Johannesburg Airport, and fencing manufacturer Bonnox, Lood Swanevelder Fencing, Faan Venter, Ibubesi Transport, and Chill Box (who donated a freezer room at the lions new home).