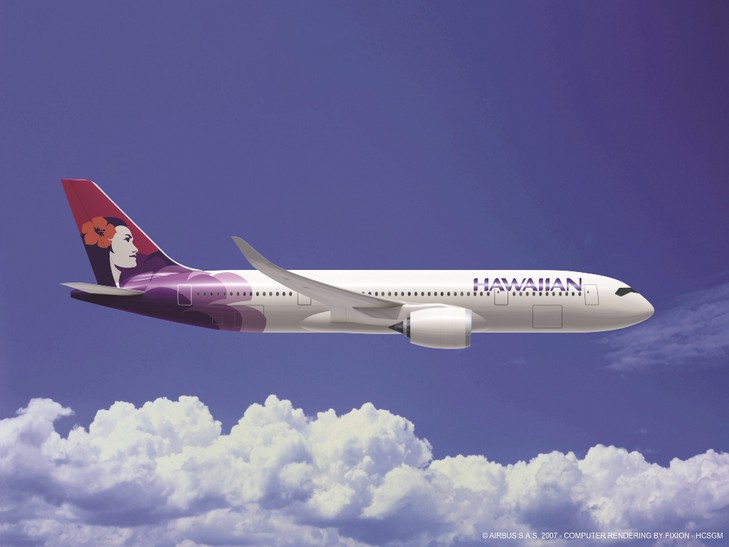 Hawaiian Airlines has given more details on the logic behind its decision to begin all-cargo flights to neighbouring islands.
Speaking during an investor call to discuss second quarter results, Hawaiian Airlines president and chief executive Mark Dunkerley said the three ATR 72 turboprop freighters it would acquire would open up US mainland and overseas widebodied services to neighbour islands.
He said: “By acquiring these ATR freighter aircraft we are going to be able to transform our neighbour island cargo business as the dedicated freighters will be able to carry the larger bulk items that the hold space that the Boeing 717s do not accommodate.
“Perhaps the bigger benefit will come from our being able to offer cargo services from points on the US mainland and overseas to the neighbour islands not served by wide bodied aircraft.
“The ATR freighters can take the standard containers in the bellyholds of the wide bodied aircraft making such connecting service viable.”
The planes, to be acquired by the airline’s parent, Hawaiian Holdings, will arrive next year and will be used on flights between Honolulu International Airport and Kona International Airport; Kahului Airport, Līhuʻe Airport and Hilo International Airport.
The flights will be branded ‘Ohana by Hawaiian and operated by Empire Airlines, which also operates a 48-passenger ATR 42 turboprop service.
Hawaiian said the ATR 72 fleet can carry up to 18,000 pounds (eight tonnes) of cargo and will be able to handle five 88-by-108-inch (2.2 by 2.8 metre) aircraft pallets or up to seven LD3 containers, skidded cargo and oversized shipments.
Dunkerley was later questioned on whether he thought the effort required to run the cargo operation was worth the returns it would likely generate.
“I acknowledge that this will be a relatively small part of our overall business, although we believe an important part,” Dunkerley said.
“We don’t think it’s going to meaningfully impose burdens on the management. First of all, the operator of the service will be ‘Ohana by Hawaiian, it’s not going to be Hawaiian Airlines, we have subcontracted that work in common with the way most airlines do for their commuter carriers.
“Secondly, from a sales perspective and commercial perspective we already participate in the market. What we are not able to do is provide this service to customers between the islands and overseas, so it adds another selling point to us commercially.
“Also, when we look at our propeller operation, adding another couple of turboprops also reduces our unit cost there because the overheads that exist there are spread a bit more thinly.”
During the second quarter, the airline recorded revenues of $571.3m, a 0.8% decline on the previous year, while net income increased 78.7% to $48.8m.
"We are pleased with the results for the quarter," said Dunkerley. "Strong demand across our network, coupled with low fuel prices, more than compensated for the adverse impacts of the strengthening US dollar, the significant reduction in most fuel surcharges and the high levels of industry capacity growth from North America.”