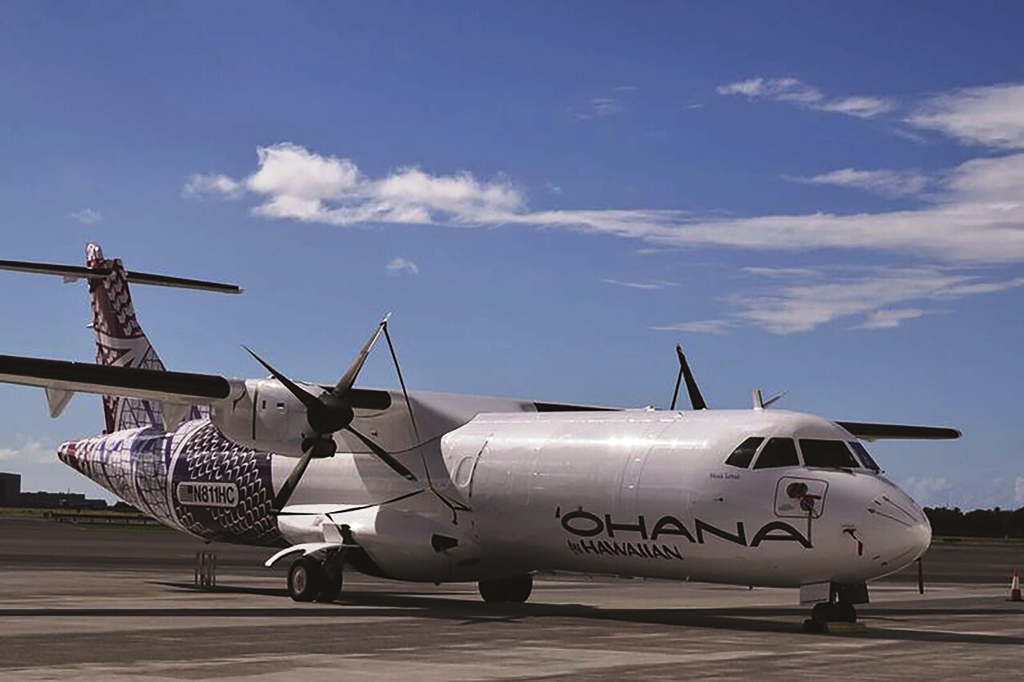 Hawaiian took delivery of its first ATR 72F in late September 2017 and since then has been preparing for the start of scheduled operations.
“We have been doing some mock operation drills and have begun hands-on training sessions for our front line teams. So far straightforward, without surprises.
“We still have a way to go before we are operationally sound though, so we shall see,” says Brad Matheny, managing director of cargo, who took over from Tim Strauss in spring 2017.
Strauss had presided over unprecedented growth in Hawaiian’s cargo business and set the wheels in motion for the move into the freighter market.
The full operation will involve three ATR 72 freighters – all of them operated by Empire Airlines, which also runs Hawaiian’s three-unit ATR 42 passenger fleet.
New operation
Scheduled service will start once the second ATR 72 is in place. Matheny expects the plane to be delivered this month (February) and has set his sights on March for the start of the new operation.
This will run between the islands in the state, starting with nightly service from Honolulu to Hilo and Kahului.
With the arrival of the third freighter a second string serving Hilo and Kona will be added.
“Initially, at least, we will run a typical freighter schedule flying overnight,” says Matheny.
The venture sees Hawaiian en- croaching into the turf of rival Aloha Air Cargo, but he does not see a battle for market share looming.
Maximum payload
Hawaiian’s Boeing B717s have captured about five percent of this market and the ATR 72s, which can accommodate eight pallets with a maximum payload of 8.5 tons each, will still leave plenty of freight available on the ground.
“There is plenty to go around,” Matheny says. Moreover, he intends to link up the ATR flights with Hawaiian’s widebody network flying to points in Asia and the South Pacific and the continental US.
“The freighters are LD-3 compatible, which matches with our Airbus A330s,” he says. “This will allow a lot of small industries around the islands to hook up with international markets.”
As well as exports of Hawaiian goods and perishables, Matheny has set his sights on several other commodities. E-commerce, which has been a huge driver of imports into the state, is one major target.
In time, he also wants to go after mail which is all slotted through Honolulu, even mailings between Hawaiian islands.
However, that contract was extended for two years last summer, so he will have to wait and look for other loads in the meantime.
Hawaiian Airlines has clocked up large double-digit growth in its international cargo business over the past years.
The result of a stronger focus on the segment, this was also driven largely by the expansion of its network to a number of points in Asia and the South Pacific which went hand in hand with the shift of its widebody fleet to A330s, which gave a boost to cargo capacity.
“We’ve had record growth for the past five, six years,” says Matheny. “Our international expansion and the conversion from B767s to A330s has been very positive.”
The carrier’s home market has also enjoyed a surge in airfreight volumes. Inbound traffic in particular has gone through the roof.
According to a report from the Hawaii Department of Business, Economic Development and Tourism, inbound airfreight rose 978.5% between 2002 and 2017.
The study suggests e-commerce is a major engine of recent growth.
International drive
Hawaiian intends to continue its international drive. “We will see growth again with network expansion. We certainly want to expand to other areas in China,” Matheny says.
Japan remains a big market for the airline, and the more recent additions of Auckland and Sydney “have been doing pretty well for us”, he adds.
However, on routes to the continental US, capacity is poised to diminish. Hawaiian’s eight B767s are on their way out and will be gone by the end of 2018. They are being replaced with A321neos.
The first of those are earmarked for a new Kahului-San Diego flight and for existing routes to Oakland and San Francisco.
The A321s can take containers, but Hawaiian Cargo has decided to go after loose cargo.
“We didn’t want the extra weight,” says Matheny. “We will look to express cargo and mail.”
The rise in volume put a squeeze on the carrier’s cargo terminal at its home base, but since mid-November 2017 the cargo division has had room to manoeuvre again, after moving into a new maintenance and cargo complex with a footprint of 281,000 sq ft.
As well as the larger space, Matheny welcomes the expanded and improved cool chain facilities.
“The perishable market is about 80% of our business,” he says.
Next, he is looking to beef up the IT to include a mobility platform for internal and customer facing applications.
It looks as though 2018 should be a busy year for Hawaiian Cargo.
Read more freighter operator news