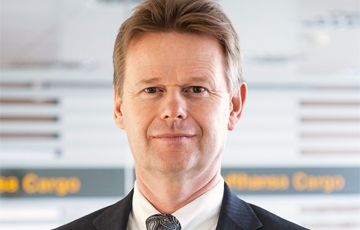 IAG Cargo’s decision to axe its remaining freighters has spooked the air cargo market, says Lufthansa Cargo chief executive Peter Gerber, writes Chris Lewis.
The debate now going on in the industry, as to whether freighters were still necessary, “has been triggered by British Airways’ [IAG Cargo] comments” in the wake of its decision to withdraw its remaining chartered freighters, along with the drastic slimming-down of the Air France-KLM fleet.
“I’ve got to praise them – never has anyone sold defeat in the market so brilliantly before,” Gerber told journalists gathered at the carrier’s Frankfurt headquarters. IAG’s comments had been made “to hide its own departure from the market,” he suggested.
IAG Cargo, the freight arm of British Airways and Iberia, terminated its agreement with Global Supply Systems (GSS) to lease three B747-8Fs, opting instead from May 2014 to purchase capacity on Qatar Airways-operated B777Fs between Hong Kong and London-Stansted.
The IAG comments had triggered doubts about the future of all-cargo aircraft with the world’s major carriers, Gerber told the conference – but added that the German airline would remain faithful to the concept.
Frankfurt was in the heart of Europe’s manufacturing industry and the airport had the largest forwarder presence in Europe.
He argued that the market for freighters was still growing, although much of that growth was among the Middle East carriers, dubbed by Gerber as the “rich uncle” airlines of the world.
Even conservative estimates put growth in the air cargo market, at 3-4 per cent worldwide, on a par with the likely increase in bellyhold capacity, but in some markets, such as Asia-Europe, it would grow faster than that, creating a continued need for freighter aircraft.
However, he conceded that life would be tough for freighter operators that did not have either a big industrial base to sustain them or a wealthy Middle East backer. Lufthansa would, however, continue to “play in the Champions’ League” of all-cargo operators.
There would always be a market for all cargo aircraft, whether it was iPhones, valuables, high end fashion or urgent goods made in specialised plants that had to be flown quickly around the world to meet just in time production schedules. Developments such as 3D printing or near-shoring had not so far affected demand, he argued.
The Icelandic volcano incident of 2010 had shown just what would happen if air cargo was no longer available, he told the conference. Airfreight still accounted for 30 per cent of Germany’s overseas trade by value, even if it was only two per cent of the volume.
Lufthansa managed an operating profit of €100m, said Gerber, despite the effects of a long-running pilots’ strike throughout the year and which is continuing into 2015. “During every strike we managed to fly all the freighters, although we cannot do anything about bellyhold cargo where flights are cancelled,” he said.
The most concerning aspect of the strike was the effect it had on Lufthansa’s image as a quality carrier, he added.
Lufthansa board member for finance and human resources, Martin Schmitt, said that operating margin was up sharply, by 4.1 per cent, although freight and mail volume was down by 2.7 per cent and load factor was very marginally reduced.
Spending on fuel was also down, partly because of the reduction in jet fuel prices towards the end of 2014 but mainly because Lufthansa Cargo had cut its fuel use by making more use of belly capacity and using freighters only where it made sense to do so.
The weaker Euro was, on balance, beneficial to Lufthansa Cargo, Dr Schmitt added.
A new cargo IT system is being progressively rolled out and is now complete except for the main Frankfurt hub. The Mosaic handling system had aged, like many Unisys systems, but work was progressing well for the roll out of the new IT network at the carrier’s largest airport this year.
Having rolled out mobile acceptance for export cargo in 2014, Lufthansa would add an import version in 2015, Gerber predicted.
He hoped to get approval for the LCCneo cargo hub at Frankfurt during 2015. The project is running about two years behind schedule, having been delayed by the discovery of a stretch of gravel in the proposed groundworks. Some reversible preliminary work is already taking place.
Gerber played down the significance to Lufthansa Cargo’s bottom line of the ongoing court cases involving freight forwarder DB Schenker.
While allowance had been made for the not inconsiderable court costs, with the proceedings expected to drag on for some time, no allowance had been made for any fines, should they ultimately be imposed.
While large figures had been “bandied about” in the press, it was by no means certain that such large fines – if any – would actually be imposed.