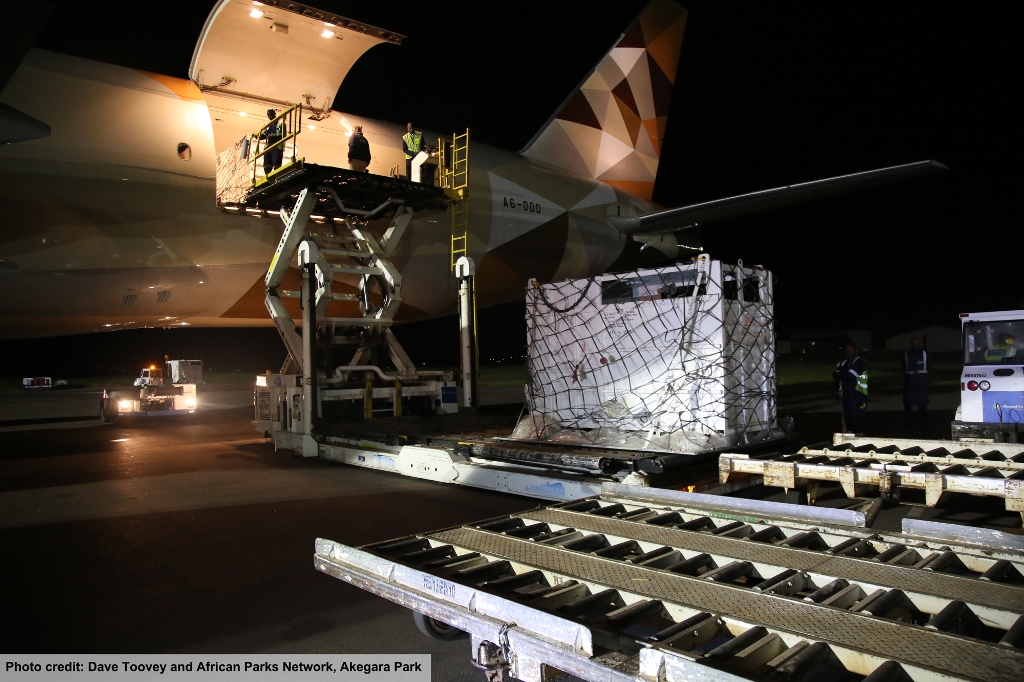 Animal transport specialist Intradco Global and Etihad Cargo have transported 19 critically endangered black rhinos utilising two Boeing 777 freighters.
On behalf of African Parks, a conservation non-profit that manages national parks and protected areas on behalf of governments across the continent, Intradco chartered the two Etihad freighters to transport the rhinos from Johannesburg to the Rwandan capital, Kigali.
Upon touching down in Kigali International Airport, the rhinos were carefully transferred to trucks to continue the final leg of their journey by road, under police escort, to Akagera Park.
Ten rhinos travelled on the first flight, and nine on the second, along with the three vets and two attendants who accompanied them for the duration of their entire journey.
The rhinos, which can weigh up to 2,500 kg each, were transported in special pallets which also contained their feed for the journey. The temperature on the aircraft is specified by the vet to ensure the animals do not overheat or become stressed.
The project to return the rhinos took place over the first two weeks of May, and represents a historical moment for the country after the species disappeared in 2007 following decades of wide spread poaching.
Intradco spent more than a year planning the journey with Etihad Cargo.
Jes Gruner, Akagera Park Manager, said: “Together with the Rwanda Development Board and the Howard G. Buffett Foundation, we have spent the last three years preparing for this historic event, ensuring that the park is safe for the arrival of the rhinos and for their long-term future so they can breed and thrive.
“Akagera has transformed since African Parks assumed management in partnership with the Rwanda Development Board in 2010, overhauling law enforcement and reducing poaching to an all-time low in just six years, thus making it safe to bring these eastern black rhinos back home.”
Intradco worked closely with African Parks and the Akegara team to ensure all permits and clearances were in place including valid CITES documentation (the Convention on International Trade in Endangered Species) – a requirement when transporting listed species such as black rhino.
Tom Lamb, Intradco project manager, accompanied the animals on both flights and travelled with the team for the five-hour drive to Akegara National Park where they were successfully released.
He said: “It is a brilliant achievement to return the extremely rare eastern black rhino to Rwanda after a 10-year absence. There are only 1,000 left globally so moving two percent of the world’s population was a big responsibility and challenge, and an incredible project to be a part of.
“It was a privilege to be able to accompany the rhinos on their homecoming and witness their release back into the wild. We would also like to thank Etihad Cargo for their role in professionally operating the two flights.”
David Kerr, Senior Vice President Etihad Cargo, added:"We are proud to play this integral role in returning an endangered species to its home.
"Last year Etihad Airways became one of the first airlines to sign the Declaration of the United for Wildlife International Taskforce on the Transportation of Illegal Wildlife Products, known as the Buckingham Palace Declaration, as a demonstration of our support for preventing illegal wildlife trade – estimated to be worth up to US $20bn today."
June’s edition of Air Cargo News features the popular Animals by Air feature, where this year the focus is on the training aspect of the animal supply chain