Korean Air Cargo and Uzbekistan Airways Cargo are set to expand their partnership with the launch of a new freighter service to Teheran’s Imam Khomeini International Airport.
Korean Air Cargo said that after the successful operation of services between Frankfurt and Navoi in Uzbekistan through the partnership it would now be able to offer flights from the city to Tehran twice a week.
The flights, due to start at the end of April, will be operated by one of Uzbekistan Airways’ two Boeing 767-300 converted freighters, which it took delivery of in 2014.
Korean Air offers services from Navoi to Europe and Incheon meaning it will be able to feed in cargo from across its network to Tehran. 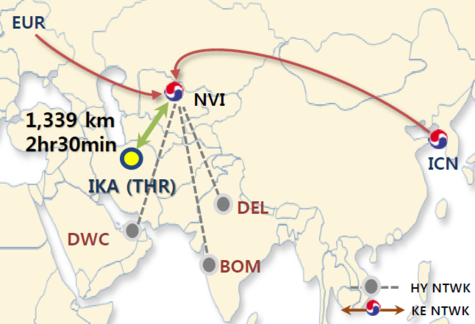 The logistics and transport industry has been looking at the opportunities created by the easing of sanctions against Iran.
In March of this year forwarder Eurogate announced it would launch operations in the oil rich country with a population of 77m people.
In a research note issued in late January, analyst Transport Intelligence practice leader Thomas Cullen said that the removal of certain aspects of the Iranian sanction regime had “triggered a flood of business, much of it requiring logistics infrastructure”.