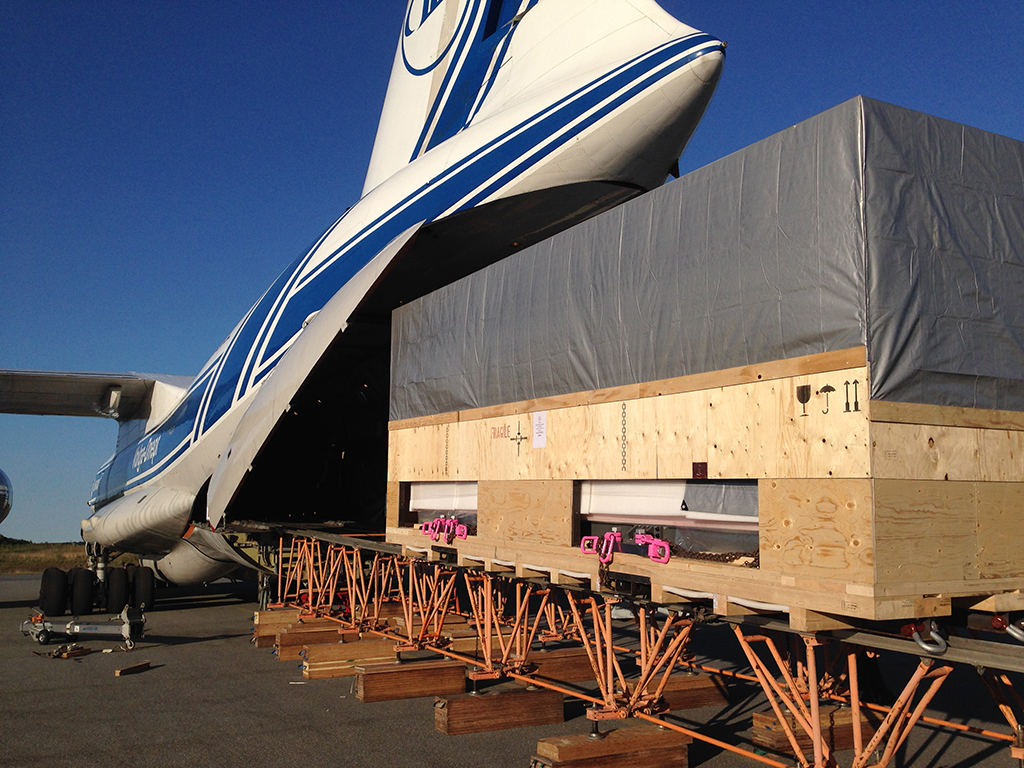 Delicate laser technology cargo has flown by freighter from Sweden to Japan after six months of detailed planning and preparation.
The high value industrial laser equipment was carried from Orebro in Sweden by Volga-Dnepr Airlines on one of its IL-76TD-90VD aircraft.
The cargo required a non-standard engineering solution and a temperature-controlled environment to complete its journey.
Alexey Stepanov, leading engineer at Russian carrier Volga-Dnepr, said: “We first met with representatives of the customer, Scan Global Logistics in Denmark and Sweden, six months prior to the flight to discuss the placing and shoring of the cargo onboard the IL-76TD-90VD.
“The 21-ton shipment’s dimensions were 3.2 metres wide and 2.7 metres high, so it was decided to transport the laser equipment in a special container with several holes that would enable us to moor the cargo in the aircraft.”
In order to load the container, a special ramp extension was used that had been developed for use by Volga-Dnepr’s An-124-100 freighter to load aerospace equipment.
Using the patented ramp extension enables cargoes to be loaded and unloaded within the shortest possible distance of the IL-76’s cargo door, improving speed and safety. The ramp equipment was delivered to Sweden from Leipzig, Germany, for the flight.
Added Stepanov: “This cargo was oversize and delicate and needed to be loaded and carried in a temperature environment below 30° C.
“To meet these requirements, the loading process in Sweden was performed early in the morning, standing time during the maintenance stop in Krasnoyarsk was reduced to a minimum, and the aircraft remained closed while the maintenance team installed equipment to unload the container in Japan.
“Additionally, Volga-Dnepr organised a ground air conditioning unit to maintain the correct temperature.”
Ole Lyngshede Lund, head of department, charter & relief, at Scan Global Logistics, who accompanied the cargo, said: “The loading went very well and the cargo was offloaded in good order.”
The laser installation will be used by one of the enterprises producing industrial electronics in Japan.