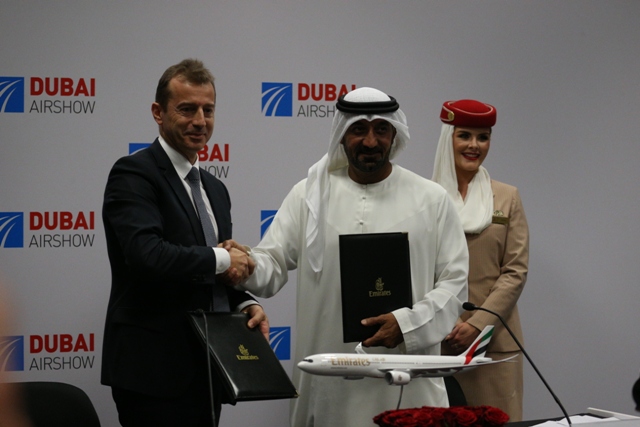 Emirates agreed a deal with Airbus for 50 A350 XWBs

With regards to cargo, there has been comparatively little to shout about so far from this year’s Dubai Airshow, taking place this week in the emirate from November 17-21.

The most notable order announced so far was the decision of Dubai-based Emirates to order 50 Airbus A350 XWB aircraft worth $16bn, as reported by Air Cargo News yesterday.

That order replaces a previous agreement of intent from Emirates to purchase 30 A350s and 40 A330 neos.

In other news, Air Arabia has signed a deal with Airbus worth $14bn at list prices to purchase a total of 120 new aircraft, comprising a mix of narowbody A320 neos, A321 neos and A321 XLRs.

It was recently confirmed that the Sharjah-based airline, which currently operates a fleet of 53 Airbus aircraft, will take part in a joint venture with Abu Dhabi’s Etihad in new enterprise Air Arabia Abu Dhabi.

Meanwhile, Airbus’s big competitor, Boeing, has sold a pair of B787-9s worth US$585m at list prices to Biman Bangladesh Airlines. A number of orders for smaller aircraft have also been placed with manufacturers Boeing, Airbus and Embraer.

The show has also seen Etihad Airways and Boeing unveil plans for a world-first ‘Greenliner’.

A specially-themed B787 ‘Dreamliner’, set to be introduced early next year, is to research products, procedures and initiatives designed to reduce aircraft carbon emissions.

Etihad has also confirmed that a special B787 ‘eco flight’ to Brussels will take place during Abu Dhabi Sustainability Week in January 2020.