Love is in the air for Emirates flower power freighters 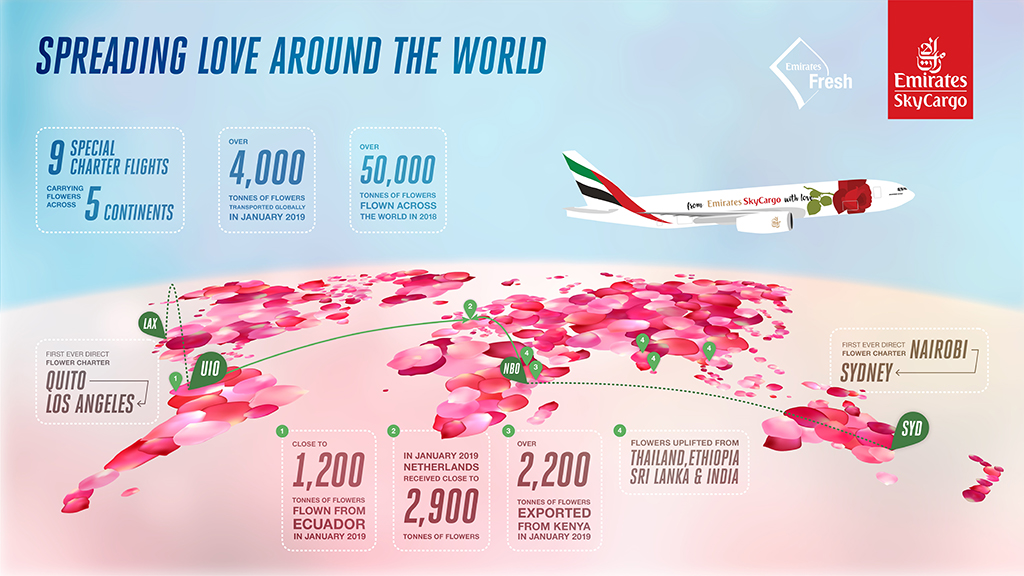 Emirates SkyCargo has operated nine extra Boeing 777 freighter ‘flower charters’, spanning five continents, to meet additional demand ahead of Valentine’s Day.
Said a spokesperson for the Middle East carrier: “With each aircraft being capable of transporting up to 100 tonnes of cargo, this translates into the carrier flying close to 900 tonnes of roses over and above the 4,000 tonnes transported monthly.
Every year, millions of roses are gifted worldwide on Valentine’s Day resulting in a spike in demand for flowers in early February.
To meet this requirement, major flower producing nations around the world, including Kenya and Ecuador, airfreight additional quantities of roses to important global centres of flower distribution such as the Aalsmeer market in the Netherlands and directly to customers around the world.
Emirates SkyCargo, the freight division of Emirates, operates daily scheduled freighter flights to Nairobi and four weekly freighters to Quito around the year to uplift flowers that are then flown to destinations across its network.
Added the spokesperson: “Emirates SkyCargo has also notched a number of historic firsts this year. The air cargo carrier operated its first direct freighter flight carrying flowers from Nairobi directly to Sydney and from Quito directly to Los Angeles.
“This is in keeping with the trend where flower farms supply directly to end customers in global markets in addition to supplying to the flower auction houses.”
In 2018, Emirates SkyCargo transported over 50,000 tonnes of flowers across the world. A majority of the flowers, over 27,000 tonnes, originated in Kenya.
This is estimated to be around 15% of the overall flower exports from the nation. In January 2019, the carrier uplifted over 2,200 tonnes of flowers from Nairobi. During the same period, Emirates SkyCargo flew over 1,200 tonnes of flowers from Ecuador to Amsterdam.
Emirates SkyCargo also transports flowers in the belly hold of its passenger aircraft from other markets such as India, Thailand, Sri Lanka and Ethiopia.
In 2018, the air cargo carrier moved closed to 2.6m tonnes of cargo.