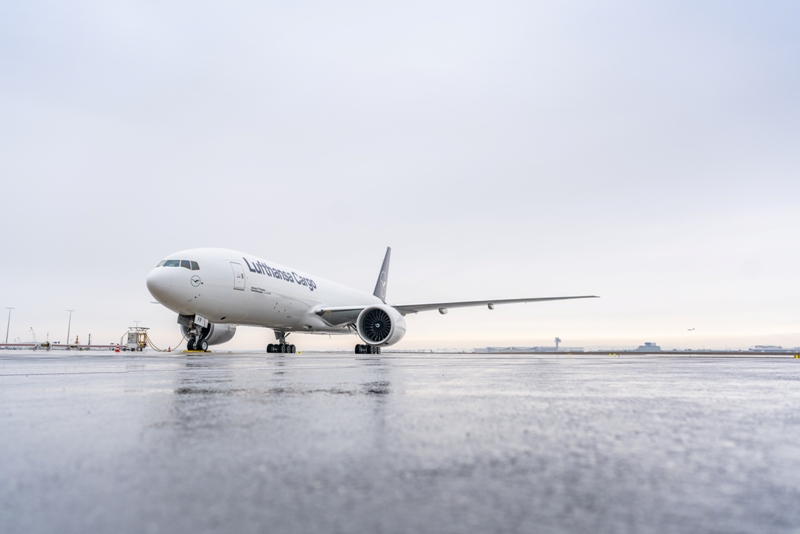 Lufthansa Cargo has welcomed the latest arrival to its freighter fleet: its sixth Boeing 777F.

The brand-new B777F flew into Frankfurt Airport from the Boeing facility at Everett, Washington state, in the USA, today (February 19).

It will soon start scheduled operations.

Harald Gloy, chief operations officer and member of the board of Lufthansa Cargo – who was on hand to greet the crew at Lufthansa’s home hub of Frankfurt – pronounced: “This aircraft is the quietest and most efficient in its class – and therefore the freighter of our choice for our ongoing fleet modernisation.”

Lufthansa Cargo is expecting another two 777Fs to be delivered this spring. The two 777Fs will replace two older MD-11F aircraft that will be taken out of service.

A spokesman for the freight carrier had previously confirmed that the two MD-11Fs will be “offered to the market”.

At that point, Lufthansa Cargo will operate seven 777Fs and ten MD-11Fs.

Last month (January), Lufthansa Cargo chief executive Peter Gerber confirmed: “We know that in the end we only want to have [the] B777, and the MD-11 is out, but we will continue to fly it as long as business opportunities are there.”

The cargo carrier’s fleet modernisation process is scheduled to be completed by 2025 at the latest.

Lufthansa Cargo currently serves approximately 300 destinations in more than 100 countries, carrying freight on its own fleet of freighters and in the bellyholds of passenger aircraft operated by Lufthansa, Austrian Airlines and Eurowings.