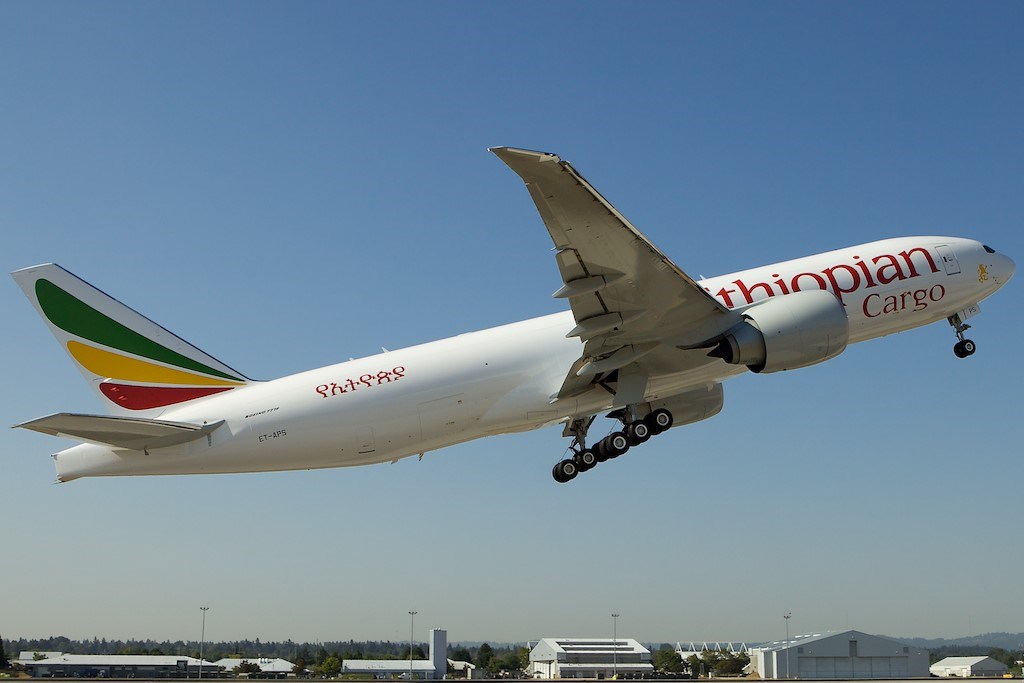 Ethiopian Airlines inaugurated its first-ever scheduled freighter service to Miami International Airport (MIA) on 29 August.
The African carrier is to operate a twice-weekly freighter connection between the Ethiopian capital of Addis Ababa and Miami, creating the first-ever cargo-only route between the African continent and the Florida gateway.
The scheduled service operates on a route that includes stops in Spain, Colombia and Belgium on inbound and outbound services. All flights will be operated by Ethiopian’s Boeing 777-200LRF aircraft.
Carlos Gimenez, the mayor of Miami-Dade County, within whose bailiwick MIA lies, was amongst the first to welcome the inaugural visit and said he looked forward to the “additional revenue, jobs and business ties these new flights will bring to our community”.
Miami-Dade aviation director Lester Sola noted: “We applaud Ethiopian Airlines for bringing us MIA’s first cargo destination in Africa.
“Our unrivalled position as the international cargo capital of the US and the gateway of the Americas continues to attract new service from key markets in Europe, the Middle East, and now, one of the busiest air cargo hubs in Africa.”

The African carrier has also pointed to the value of the Spain-Bogota connection on the service’s routing.
And Tewolde GebreMariam, group CEO of Ethiopian Airlines, added: “We are very pleased to see Zaragoza, Miami, and Bogota joining our fast-expanding freighter network in the Americas.”
The service is expected to carry Inditex high-end textile products from Zaragoza to the Americas.

Spain-headquartered Inditex is one of the world’s largest fashion retailers.
He further predicted: “In line with our strategic roadmap, Vision 2025, we will keep on expanding our cargo destinations worldwide, thereby facilitating trade and economic growth among different regions of the world."
Miami growth
The Ethiopian Airlines freighter service is the latest all-cargo addition to MIA’s runways.
During 2017, TACA Peru began a four times a week freighter service that connects Miami with five South American cities; Mexico-based Aeronaves TSM launched a  10 times a week freighter service from Cancun to MIA; and Qatar Airways launched twice-weekly cargo flights from Doha, the service having intermediate stops in Luxembourg, Sao Paulo, Buenos Aires, Quito and Liege.
Then, this year, Southern Air launched weekly all-cargo flights to MIA from Hong Kong, routing via Anchorage; Turkish Cargo launched a second weekly frequency from Istanbul; and Polar Air Cargo inaugurated a direct Tokyo freighter connection.
In 2017, MIA enjoyed its best-ever year for freight traffic, handling over 2.2 million tons of cargo that passed through the airport.
Ethiopian expansion
Ethiopian Airlines now serves more than 92 international destinations across five continents. It is expanding its passenger and cargo network extraordinarily quickly. It is also looking for other forms of investment to grow its international presence.
Thus, for example, only a few days ago (on August 24), it announced that it had finalised agreements with the government of Chad for the launch of a new national carrier for the country.
Ethiopian will have a 49% stake in the joint venture, while the government of Chad will have 51%.
GebreMariam remarked: “The strategic equity partnership in the launching of the new Chad national carrier is part of our Vision 2025 multiple hub strategy in Africa.
“The new Chad national carrier will serve as a strong hub in Central Africa availing domestic, regional and eventually international air connectivity to the major destinations in the Middle East, Europe and Asia.”