DHL and Air Charter Service (ACS) say that relief efforts to help those affected by the Nepal earthquakes have now overcome logistical issues at Kathmandu airport.
Charter specialist ACS said it had now completed more than 50 charter flights to Kathmandu since the 7.8 magnitude quake struck the country on April 25 and a second 7.3 magnitude quake struck on May 12.
Initially, the relief effort was hindered by the size of the airport, said ACS commercial director Justin Lancaster: “Scheduled passenger flights, emergency rescue flights and military operations were being allocated top priority and landing permits and overflight permissions were taking up to four days to be processed.
“These problems were gradually overcome. We sent in ACS staff members on the first few aircraft that we were able to get into Kathmandu.
“Once they were on the ground, they could coordinate our relief efforts and provide us with real time information on the situation.”
“We have been involved in coordinating mass relief efforts before, such as the aftermath of the Asian tsunami, the Haiti earthquake and, most recently, Typhoon Haiyan in the Philippines, but the logistical challenges trying to help victims of the Nepalese earthquake were some of the most difficult that we have ever had to overcome.
“Such is the complexity of the situation that, more than a month after the first earthquake struck, we still have someone on the ground over there helping us coordinate the charters.”
The charter company has flown aid in from all over the world – the UK, Belgium, Germany, Spain, Scandinavia, India, China, Hong Kong, the Philippines, Canada and the Middle East – for governments, NGOs and freight forwarders.
Meanwhile, Deutsche Post DHL has wrapped up its disaster response team deployment in Kathmandu, just over a month since the first earthquake.
The team worked closely with Nepalese authorities, the United Nations World Food Programme, governments, aid agencies and NGOs to improve logistics operations at the airport, including cleaning up the congested tarmac area of relief supplies.
The company has created an infographic to outline the challenges it faced (see below).
Earlier this week, Qatar Airways Cargo revealed it had operated a total of 12 freighter services to deliver urgent aid to the capital Kathmandu following the earthquakes. 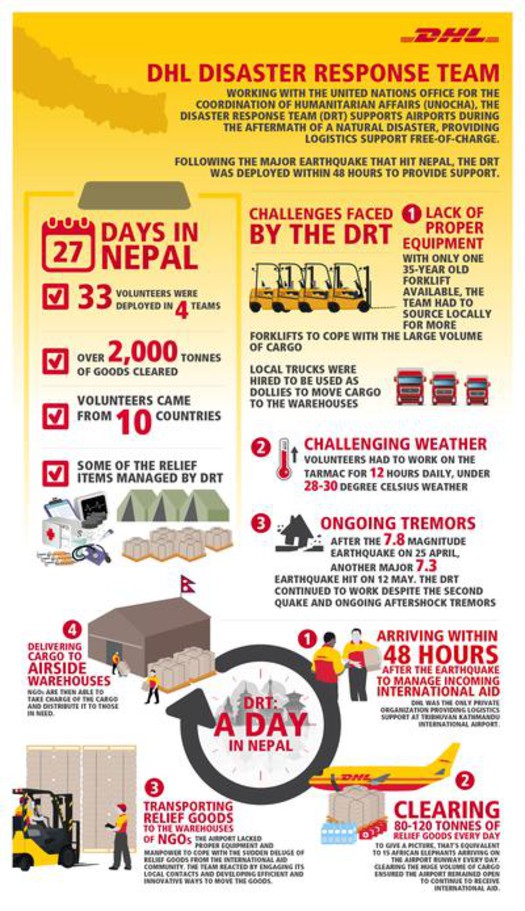