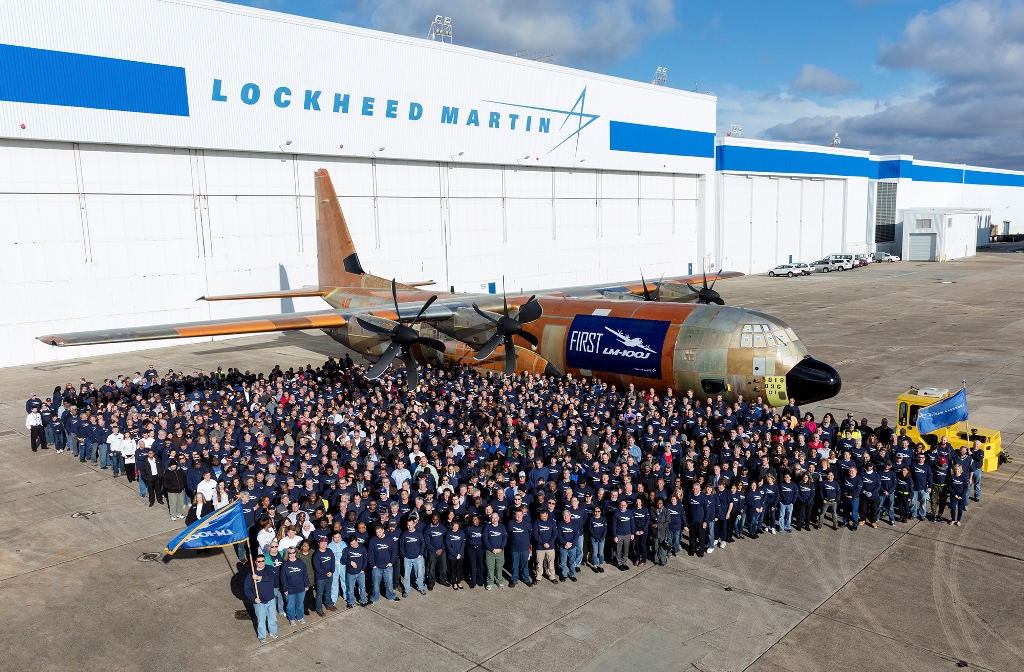 The latest version of the famous Super Hercules aircraft has taken another step closer to launch, with its official walkout taking place today.
The rollout ceremony for first LM-100J commercial freighter – the newest member of the C-130J Super Hercules family – saw employees who have helped design and build the aircraft walk it out of its hangar.
The aircraft will now go through final preparations for its first flight, which will take place this spring.
Following the first flight, the aircraft will process through a Federal Aviation Authority civil type aircraft certification update before being delivered to the unnamed first customer next year.
Speaking to Air Cargo News shortly after the ceremony had taken place, Tom Wetherall, director of LM-100J business development, Lockheed Martin Aeronautics, said the previous model had stopped being manufactured in the early 1990s.
With these aircraft now coming to the end of their life, customers had been asking for a replacement.
He said the LM-100J, which has a payload of around 23 tonnes, has been upgraded to six-propeller engines, compared with four propellers on the previous model, and has a new Rolls Royce engine, making it more fuel efficient to fly.
The older model is known for its military, humanitarian and oil and gas operations and Wetherall said that while the new model would continue to target these markets, it would also look to new sectors, such as e-commerce.
He explained that the aircraft can land on 70% of the world’s land mass, thanks to its dispatch reliability and its high and straight wing configuration, which reduces its foreign object damage area.
The fact it can reach remote areas makes it ideal for e-commerce businesses that need to reach markets that do not have well developed overland transport infrastructure and airports, such as certain places India.
He said that at the moment many of these places are even difficult to reach by truck or train and when you take into account the cost of flying to a major airport and then the overland leg to the final destination, it is actually cheaper to fly the cargo directly to destination on a LM-100J.
There are also security considerations to take into account when transporting along remote roads using trucks.
More traditional markets that the aircraft, which offers roll-on/roll-off configurations, will cater for are: oversized cargo transport; oil dispersion/aerial spray; oil and gas exploration; mining logistics operations; aerial fire fighting; aerial delivery; medevac/air ambulance; humanitarian relief operations; personnel transport; austere field operations; and search and rescue.
In 2014 ASL Aviation signed a letter of intent for 10 of the aircraft, while in 2016 a further 10 were ordered by Bravo. At least one unnamed customer has also placed an order.
Wetherall said that other target customers for the new model are operators of the older version. This includes, Safair, Lynden Air Cargo, Transafrik and Libyan Arab Air Cargo.