Ongoing boost from shipping and bellyhold shortages for freighter operators

A slow recovery in belly capacity and higher rates in ocean shipping are expected to boost air cargo for the coming years, according to Boeing’s Tom Crabtree.

Its latest statistics show that over the first five months of 2021, traffic in revenue tonne km (RTK) terms was up 9% on pre-pandemic 2019 levels for the period, while capacity was 13% down.

As a result, average load factors for the five month period are up by 11 percentage points on 2019 levels and yields are up by 75%.

“The economic dent due to Covid has been relatively minor,” Crabtree said. “It has impacted the service sector more than it has the merchandise goods sector.

“As a consequence, airfreight and freight transportation in general was moderately affected globally compared to the service sector.”

And looking ahead, Crabtree is not expecting the current strength of the market to change in the short term.

Crabtree pointed to IATA figures that show lower-hold cargo capacity is not expected to return to 2019 levels until late 2023 or early 2024. 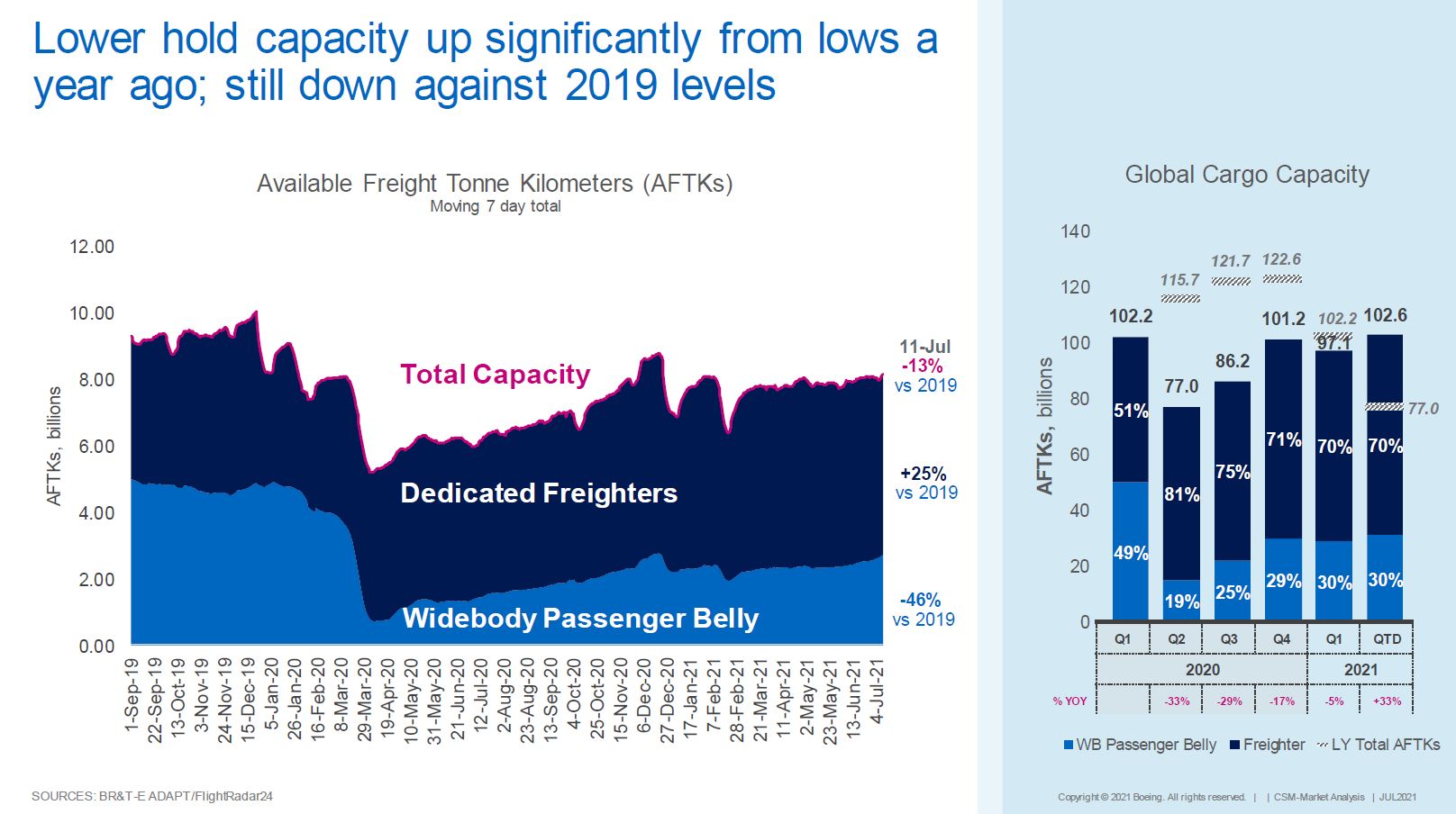 On the demand side, e-commerce will continue to boost air cargo. Figures from Statista show that e-commerce revenues are expected to grow from an estimated $4.9trn this year to $6.5trn in 2023.

On container shipping, he said that the sector is suffering from box and crew shortages.

“Boxes are in the wrong place and crews can’t get to their boats,” Crabtree said. “It is really chaotic right now.”

As a result of the issues in ocean shipping, rates have increased rapidly and figures from consultant Drewry show that in June prices were up by around 215% year on year. Crabtree said they have increased further since then.

Meanwhile, consolidation in the container industry means that carriers have become more supply disciplined than they were in the past.

Crabtree said the higher prices in ocean have narrowed the cost differential between air and sea.

Air cargo prices are this year around six-eight times higher than seafreight, much lower than the 2019 price differential of 11-15 times.

Although shipping rates are expected to decrease, the price difference between the two modes is expected to continue to be closer than in the past.

“There is much more pricing control in the hands of the liner companies,” Crabtree said. “It is a sellers’ market, it is not a buyers’ market.

“Containership pricing will eventually come back down to levels we saw late last year, but do I see it going back to a 40ft movement only costing $1,500 from coastal China to Felixstowe, Rotterdam or Los Angeles? I have great doubts simply because the liner companies can make money now because they control so much capacity. In my opinion that is a long-term fillip for airfreight.”

He added: “I have no doubt that container shipping will be the 2bn tonne per annum industry that it is today but I do think that airfreight will figure more in the future decision tree of shippers where in the past they would have tried to avoid it at all costs because of the expense.” 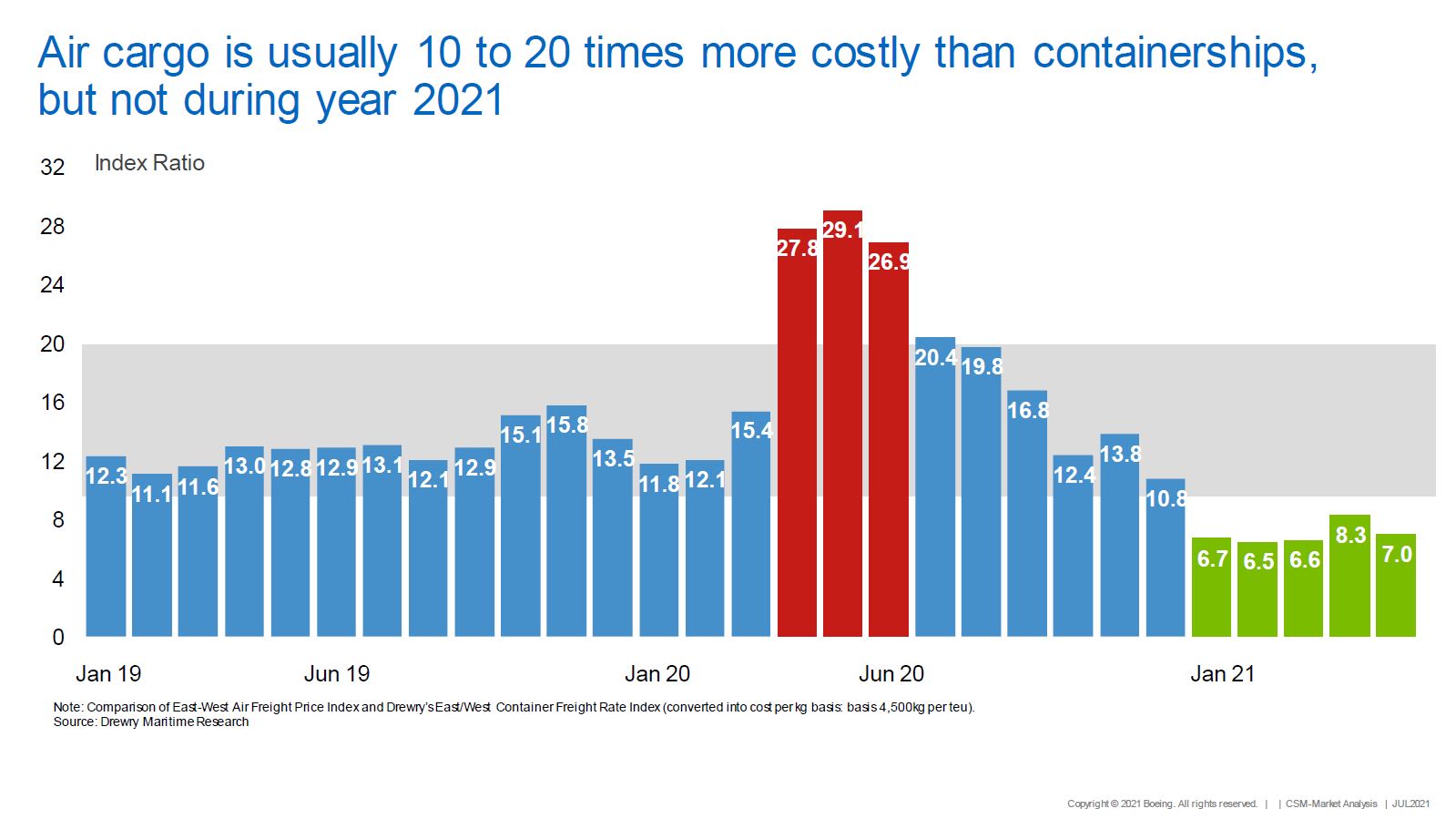 On the current market, Crabtree said that airlines with access to freighters have benefitted the most.

He pointed out that express operators’ international RTKs – excluding ACMI – are up by around 25% over the first five months compared with the same period in 2019 and all-cargo carriers are up by around 32%.

In contrast, combination carriers’ cargo traffic growth for January-May is up 1% on 2019 and passenger bellyhold operators are 36% down.

Overall, freighters now have a market share of 70% compared with 51% in the first quarter of 2020.

Crabtree said that while Boeing does not yet have a position on whether freighters will continue to have a higher market share than in the past, he personally feels all-cargo aircraft will become more important.

“We [Boeing] are taking a wait and see approach, we want to see what happens in the next year or so,” Crabtree said.

“It is my hunch that freighters are going to have a heightened role in air transport compared to pre-pandemic times.

“It wasn’t that long ago that some were saying you don’t need freighters, just pax bellies — they will take care of the entire industry. Nothing can be further from the truth.

“If shippers want their needs tended to and prioritised, they have to go on a freighter at some point. Pax bellies are quite capable but shippers’ needs are tended to in a primary manor by those folks that operate freighters.”

Boeing has seen demand for its freighter aircraft increase since the start of the outbreak as airlines look to capitalise on market demand.

In 2019 the manufacturer received 28 orders for production freighters, in 2020 the number stood at 23 and by the end of July this year 35 orders had already been placed.