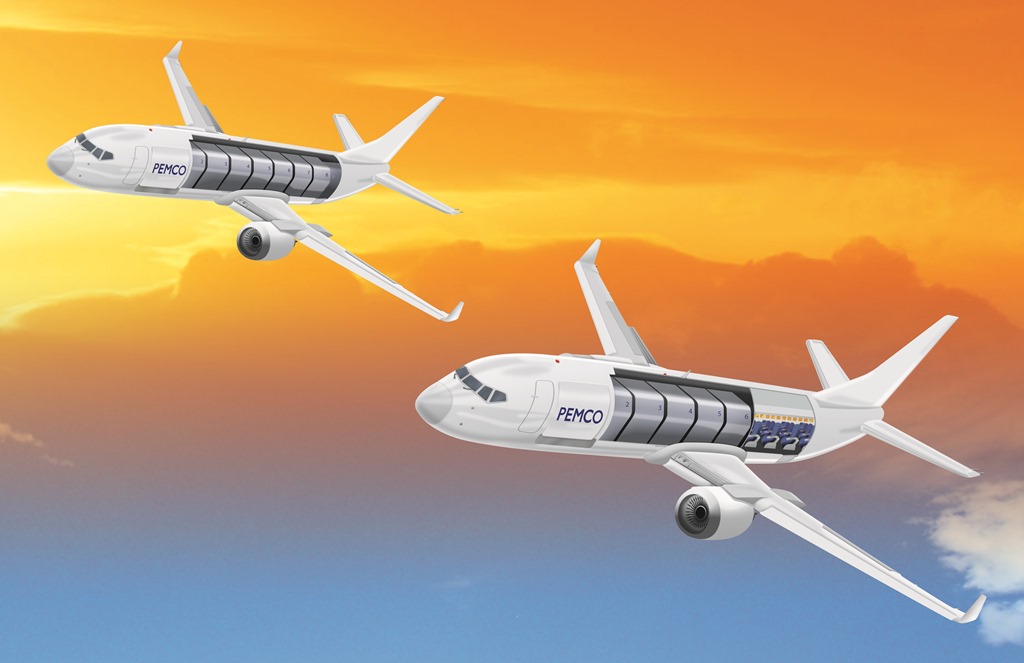 Pemco has expanded the range of aircraft it can offer for conversion by adding a new conversion programme for the Boeing Next Generation 737-700 aircraft.
The ATSG-owned conversion and maintenance house has launched its passenger-to-flexcombi and passenger-to-freighter conversion programmes for the aircraft, which will be marketed as B737-700FC and B737-700F.
At present, Pemco offers conversions on two aircraft types – the B737-300 and B737-400. However, feedstock for B737 classics are beginning to dry up and they are therefore becoming expensive for their age, so the expansion of Pemco’s conversion programme is well timed.
The 737 aircraft is also proving popular with express and parcel airlines, particularly in Asia, as they look to meet the needs of the rapidly growing e-commerce market.
“We’re excited to finally announce the launch of our 700-series conversion programmes for the Boeing 737,” said Pemco director of conversion programmes Mike Andrews. “Over the past several months, we have worked closely with our customers to fully understand their requirements and implement a comprehensive solution.”
The launch customer for the Pemco B737-700FC is Bahrain-based Chisholm Enterprises, a Middle East-based provider of aviation services. Its subsidiary Texel Air, a non-scheduled cargo airline, will operate the B737-700FC from Bahrain International Airport.
“We made a significant investment to develop our specification for the FlexCombi to meet our operational requirements,” added Chisholm Enterprises chief executive George Chisholm.
“I acknowledge the professionalism and support received from the Pemco team during our extensive evaluation process culminating in Pemco’s confirmation of proof of concept. This underwrote our decision to become the launch customer for the B737-700FC.
“We have also worked with Pemco as the end customer for four previous B737-300 conversions including the current two aircraft in the Texel fleet. We have benefited from the trouble-free Pemco cargo system since 2009.”
The B737-700FC offers three configurations: a 24-passenger cabin plus a 2,640 cu ft cargo hold for up to 30,000 pounds of payload in six pallet positions; a 12-passenger cabin plus a 3,005 cu ft cargo hold for up to 35,000 pounds of payload in seven pallet positions; or full-freighter mode consisting of a 3,370 cu ft cargo hold for up to 40,000 pounds of payload in eight pallet positions.
The available positions will accommodate 88” x 125” or 88” x 108” pallets, with the seventh and eighth positions accommodating smaller pallets.
The B737-700F conversion features nine pallet positions, up to 45,000 pounds of payload, and 3,844 cu ft of total volume. The available positions will accommodate 88” x 125” or 88” x 108” pallets, with the ninth position accommodating a smaller pallet.
“This has been a very carefully thought out process for us,” Pemco general manager Pastor Lopez said.
“We are leveraging our extensive knowledge and market leadership in the Boeing 737 Classic and designing a great product, at a sensible price, for our customers.
“Operators have responded very favorably to our entry into this space. Our engineering and quality teams have been working with the FAA very closely over the last year to address their points early on. This led us to have a project number ahead of schedule.”
Pemco is not the only conversion house offering the 737-700 as an option, with a programme also available from Israel Aerospace Industries/Bedek.
Also, in February 2016, Boeing launched a conversion programme for the B737-800 aircraft.
The B737 continues to prove popular with Chinese express and postal airlines. ATSG believes the Chinese express market is growing by around 30% per year and Pemco is already one of the major suppliers of B737 classic conversions.
Pemco estimates that its conversion make up around 70% of the B737-300s and B737-400s used in China today.