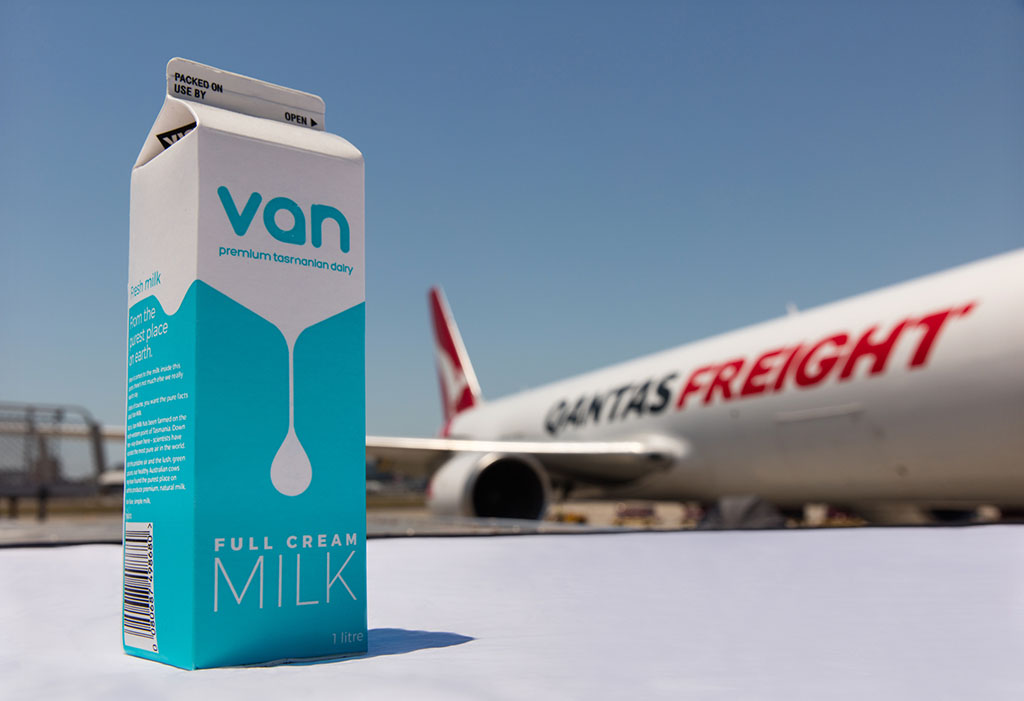 Qantas Freight will use the belly of a Boeing 767-300 freighter to carry VAN Dairy’s fresh Tasmanian milk export to Ningbo in China.
Subject to government and regulatory approvals, Qantas will carry more than 50,000 litres of fresh VAN milk in the first half of 2017.
The B767-300 freighter will operate from Hobart in Tasmania to the second largest city in the Zhejiang Province, which has a population of 55m people.
The B767-300 service, the largest commercial aircraft to regularly operate into and out of Hobart, off the Australian mainland, will initially operate weekly, with a view to increasing the frequency to meet demand.
Local distributors will truck the milk to supermarkets and convenience stores in Ningbo and Beijing, with fresh milk travelling from cow to container to consumer in China across 10,000 km.
Sean Shwe, managing director of VAN Dairy’s parent company, Moon Lake Investments, said: “There is a huge demand for fresh milk in China and the key to satisfying that demand is having a reliable freight partner with an established freighter network, infrastructure and support in China and expertise in handling fresh produce – Qantas provides that.”
“Establishing this trade bridge is an exciting venture for our dairy company, VAN Dairy who produce VAN milk, and opens the door for access for other Tasmanian producers of fresh, perishables such as seafood, fruit and vegetables to airfreight their produce on this direct flight to China.
“It will be a game changer for Tasmania, and we are proud to be leading the charge.”
Alison Webster, executive manager Qantas Freight and Qantas Catering Group, said: “We’ve been flying freight between Australia and Greater China for more than thirty years, and currently offer freight capacity on forty flights a week.
“This includes five dedicated freighter aircraft services, carrying a mix of perishables such as chilled meat, seafood, dairy, fruit and vegetables as well as general cargo.”
Webster continued: “Over the past three years Qantas Freight has developed particularly strong capabilities in dairy export which, with its short-life, requires close collaboration to ensure on time delivery and quality control throughout the supply chain.
“We’re really pleased to partner with VAN Dairy to help meet the booming demand for fresh Tasmanian milk in China – it’s the ultimate milk run.”
Moon Lake Investments has chosen Ningbo and China’s capital Beijing as the initial distribution areas, with plans to extend VAN Dairy’s market reach to Shanghai, Hangzhou and other cities after the product is established.
A sophisticated marketing campaign will also be launched in China across print, outdoor and Chinese social media channels Weibo and YouKu showcasing Tasmania’s natural beauty.