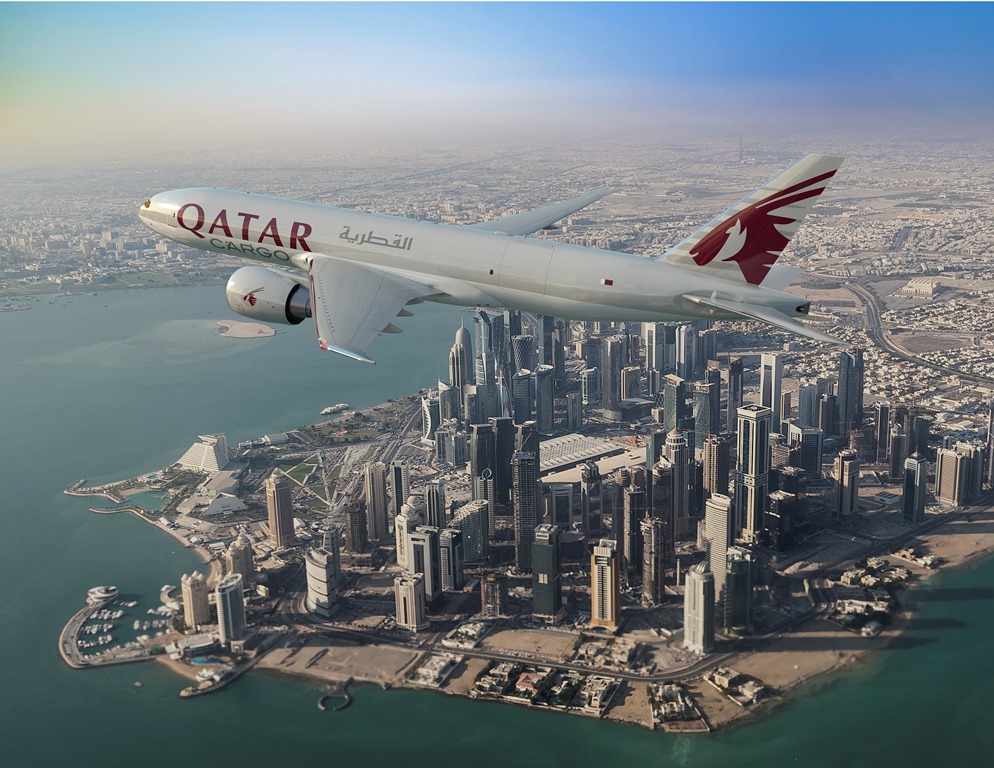 Qatar Airways has finalised its order for five B777 Freighters at the 2018 Farnborough International Airshow.  The deal, valued at $1.7bn at current list prices, was announced as a commitment in April.
The announcement was attended by the State of Qatar’s Minister of Finance and Qatar Airways Chairman, Ali Shareef Al Emadi.
Speaking to Air Cargo News in June, Qatar Airways chief officer cargo Guillaume Halleux said it was too early to say if the five freighters would replace five of its A330s or come on top, or even a mix.
This order is in addition to another two B777Fs that will soon join the fleet to replace three of its A330Fs, which are leased and due to be returned in the first quarter of next year.
"I am delighted to be further enhancing our cargo fleet and adding five Boeing 777 Freighter aircraft," said Qatar Airways group chief executive, Akbar Al Baker. "In the past 15 years, Qatar Airways Cargo has grown steadily and globally, becoming the third largest in the world. We could not have achieved this success without our resilient relationship with Boeing."
Qatar Airways operates a fleet of 13 777 Freighters and two 747-8 Freighters.  With this latest order, the airline is set to grow its Boeing Freighter fleet to more than 20 jets.
"We are proud that Qatar Airways recognises the value of the 777 Freighter and continues to invest in this aircraft to serve its expanding freight operations," said Boeing Commercial Airplanes president and chief executive Kevin McAllister.
"We continue to see a resurgence in the air cargo market and we are confident that Boeing’s industry-leading freighter family is well positioned to meet our customers’ requirements."
Boeing said it has now sold 65 widebody freighters in 2018, and more than 180 widebody freighters since the start of 2014, which equates to a 98% share of the market. In that same time, Boeing has delivered more than 140 wide-body freighters, which translates to a 92% share of deliveries.
The B777F is capable of flying 4,900 nautical miles (9,070km) with a payload of 112 tons (102 metric tonnes). "The airplane’s long range translates into significant savings as fewer stops mean lower landing fees, less congestion, lower cargo handling costs and shorter delivery times," Boeing said.
Earlier today, Boeing and DHL announced an order for 14 B777F, marking a busy year for orders of the freighter aircraft.
As well as the DHL order, FedEx ordered 12 B777Fs in June, while Lufthansa Cargo has ordered two more of the 103 tonne capacity long-range jet.
Turkish Airlines kicked off the year with a confirmed order for three B777Fs, to be delivered this year, on top of the two it already operates, while Japan’s All Nippon Airways (ANA) is acquiring two B777 freighters — for delivery in 2019 — in response to the “expanding market in Asia, China, and North America”.
The secondary market saw US-based aircraft lessor Atlas Air acquire two B777-200 freighters in March from LATAM Airlines, South America’s biggest cargo airline. Both aircraft will operate in aircraft, crew, maintenance and insurance (ACMI) service for DHL Express through Atlas’ Southern Air subsidiary.
Read more freighter operator news
Sign up to receive Air Cargo News direct to your inbox for free