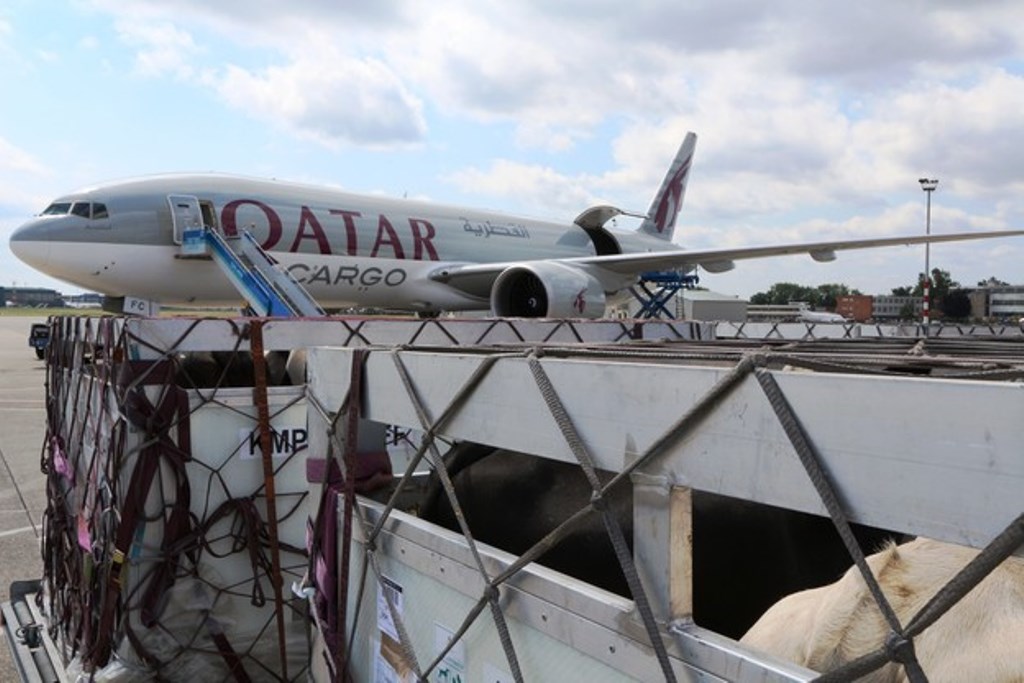 Freighter operator Qatar Cargo has begun flying cows into Doha for a project that aims to establish a dairy farm and bypass a blockade by its neighbours.
The first 165 Holstein dairy cows were flown out from Budapest Airport last week onboard one of Qatar’s Boeing 777Fs operating on charter.
The airport said that loading the high-value and sensitive cargo of breeder calves required proper care and attention as the calves could not me left out in the sun while awaiting boarding. The calves were therefore transported to the airport in the early morning for their flight.
“One carriage box accommodates four calves standing in it weighing more than a hundred kilograms each preventing them from any injuries even if they get scared during the flight,” the airport said.
Budapest Airport property director René Droese added: “Fortunately, this special livestock cargo was not the first one for Budapest Airport; we have dispatched several ‘cattle charters’ from Ferihegy to the countries of the Middle East, or to the Pacific coast of Russia, like last time, for instance.
“Qatar Cargo operates three scheduled flights per week between Doha and Budapest with Airbus 330-200F cargo planes, but this charter plane, a Boeing 777 has about 60% more cargo capacity, and we do hope to see it more often at our airport going forward due to the dynamic increase of cargo volumes carried by the airline.”
Qatar’s aircraft are currently banned from entering the airspace of Saudi Arabia, the United Arab Emirates, Bahrain and Egypt after it was accused of destabilising the Middle East region through its support of extremist groups – something it denies.
As well as the closure of airspace, Saudi Arabia has closed its land boarder, which is how 40% of food imports arrive in the country.
To circumnavigate the blockade, one business entrepreneur brought forward plans to fly out 4,000 cattle to the country as he looks to establish a dairy farm in Qatar.
The plans were already in place, but the business man is now hoping operations at his diary farm are underway by the end of the month, rather than September, and is looking to move the 4,000 cows on 60 flights rather than use ocean transport.
More freighter operator news

The Challenge Group, which includes two freighter airlines, cargo handling and logistics businesses, is aiming to triple the size of…