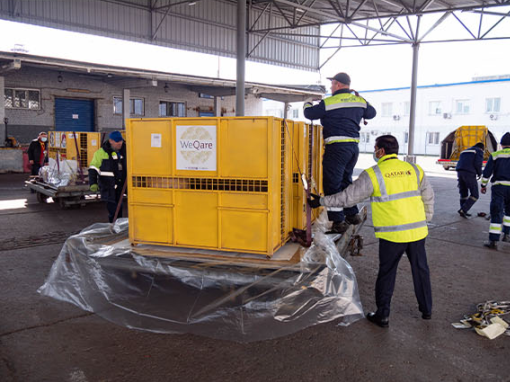 Qatar Airways Cargo has transported seven lions to nature reserves in South Africa free of charge as part of its Rewild the Planet initiative.

The operation saw the carrier transport three lions, one lioness and three cubs from Kiev to Doha and then Johannesburg over three days.

The lions were then transported to the Kouga and Swinburne nature reserves in South Africa where they were able to walk on grass for the first time.

The Rewild the Planet initiative is Chapter Two of the airline’s WeQare sustainability programme.

Qatar Cargo said that transporting wild animals requires close co-operation between the specific services involved within the airline and WOW, the charity involved in moving the lions.

In total, the flights took more than six months of planning, a dozen departments and 50 employees were involved.

The NGO staff looked after the animals’ well-being during the entire journey and handlers from the Qatar Airways Cargo’s Live Animals facility are present at every stage.

The lions have lived in captivity for years and will not be able to adapt in the wild. They will spend the next few months in a protected area in which they will simply learn to explore nature.

They will then be transferred to a much larger nature reserve where they will be protected and taken care of for the rest of their lives.